Helping the families of fallen heroes

For more information on the Two Hundred Club of the Coastal Empire, please visit their website, www.twohundredclub.org.

THERE’S NOTHING like having the peace and warmth of understanding individuals by your side during life’s most difficult moments.

For Patsy Rogers, one of life’s most difficult moments occurred on Dec. 13, 2004, when her husband Larry Rogers, the fire chief of the city of Claxton, Ga., suffered a fatal heart attack after fighting three fires back to back.

Thankfully, Rogers did not have to face this horrific experience all alone.

“Members of the 200 Club met with me the following week and introduced themselves and what they do,” Rogers said.

What organization members probably told her that day is that the 200 Club of the Coastal Empire is a 501(c) (3) organization that was founded on Dec. 12, 2000 to provide immediate financial assistance to the families of local law enforcement officers and firefighters who lost their lives in the line of duty, while protecting their community.

“They presented me with a check to meet immediate financial needs,” Rogers said. “They have always included the families in all of their activities and do for us throughout the year. They have never forgotten us.”

Now, the 200 Club are asking that the community helps them while they continue to assist the families of those brave, front-line men and women that serve us all.

For the 5th year in a row, the 200 Club is having their $25 Boston Butt sale fundraiser. These delicious, fully smoked, 5 lb. entrees will be prepared by the cooking team at the Chatham County’s sheriff’s office. 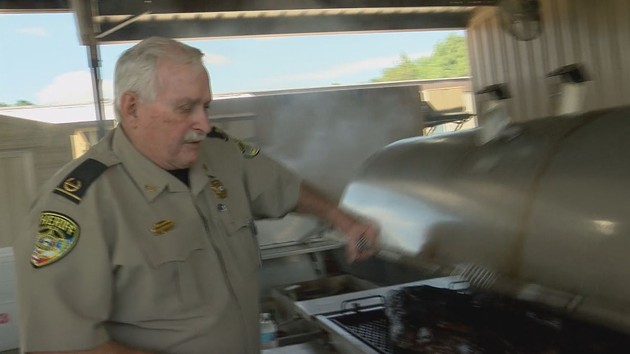 “We are so very thankful for Sheriff John T. Wilcher and his team of volunteers for cooking, packing and hosting this sale,” said Leisl Tanner, administrator for the 200 Club of the Coastal Empire.

Every dollar of the proceeds will go toward the families of fallen heroes with stories similar to Rogers’.

Rogers is now a member of the 200 Club, acting as the support she both needed and received during her own burdened time. She is a patron of the 200 Club’s annual fundraiser for the third year in a row.

“Last year I got about 15 (Boston butts) and everyone said to put them on my list for this year. They are the best I’ve ever had! I would highly recommend them!” Rogers said.

Orders of 10 or more Boston butts will be delivered upon request.