With the recent closure of several gallery spaces, there are only so many places in town that artists can show their work. That, of course, is a problem because artists need a place to show their work.

That need has inspired artists around the city to take matters into their own hands and start up their own art spaces. From big endeavors like Cedar House Gallery to pop-ups like Morgan Adler’s living room gallery The Space Between, artists are forging spaces in a scene that desperately needs them.

The Hen House is one such space.

Run by artists Kevin Clancy and Chris Fisher, the studio space began in the most organic of ways.

“The complete impetus was to give our friends opportunities to show, and then organically it starts to grow from there,” explains Clancy. “There were people that came to the opening were people we didn’t reach out to, that had found the Instagram through other people’s Instagrams. It’s definitely a ground-up, grassroots kind of thing.”

The Hen House is located at 39th and Paulsen, in close enough proximity to the First Friday circuit to bring that traffic, but far enough away to be a destination in and of itself.

“It’s not necessarily the foot traffic you get on Bull Street or people that just happens to be walking by,” says Fisher, “but [at the opening] there was a good amount of people that made a point of coming here. Then, once they were here, the space is inviting enough where people would stay. I think the uniqueness of the location—not like walk in, see it, and leave—really benefited that opening show for sure.”

The space’s look is lo-fi by design. Fisher and Clancy built a flat white gallery wall over the original paneled walls. Those walls are offset by an unfinished floor, a deep blue accent wall, and exposed air vents.

“We were prepared to [hang art] on the old walls and make it down and dirty, just a little grungy,” says Clancy. “The floor is something we actually really love about it. There’s a nice polished feel to the walls. The work is going to look nice on this flat, clean wall, and then some of the non-negotiables like the piano and the couch and these flat files—it’s a bit eclectic.”

The Hen House’s eclectic, unconventional approach to showing art will be what sets it apart for artists. It’s an arts incubator, not a gallery, which cuts the cost.

“We’re offering seven days for under $200, and we don’t take a cut of anything that gets sold because we’re not in the business, we’re not a gallery,” explains Clancy. “Yes, it’s a gallery space and we show art in it, but we did workshops last week, we’ve had friends that have mentioned doing book readings or outreach for issues that they’re passionate about, it can be anything. If you wanted to destroy this wall, we’ll probably let you.”

Clancy explains that since they’re paying the rent and aren’t working as gallerists, there are no hidden fees for the artist.

“What people are paying is literally what we’re paying,” he says. “And if they sell any work in here, they just take [that money]. It’s not our business what they do with it.”

“Our ultimate goal with this space, because artists don’t have a lot of money when they’re starting out, we wanted to make it so people could show for free and be able to get their art out there and not have to worry about these ridiculous price tags just to show for three to five days,” says Fisher.

As such, the Hen House is a bit of a financial gamble, but it’s an important one.

“When we talked it out in the beginning, it was like, ‘This is what we’ll pay for the whole summer,’” says Clancy. “If everything goes south and nothing good happens here, are we okay with that? And we agreed that we would be okay with that.”

So far, good things are happening. Last weekend, the Hen House saw its second group show, a works on paper exhibition curated by Louie Remy. Future projects include a residency with Gonzalo Hernandez and an artist from Atlanta creating an installation through the whole space.

When the lease ends Nov. 1, Clancy and Fisher don’t want the Hen House to stop there.

“We want to take it on the road—we’ve been discussing that,” says Clancy. “Like the Hen House as a brand that’s interested in showing art, then I think we’ll probably switch to a more curatorial arm and start working with other galleries in the city do to Hen House Presents kinds of things, just to keep the momentum going.”

That momentum could have the potential to further build up Savannah’s art community.

“I think the biggest issue is that most people end up coming to Savannah, and it is an arts town, but they end up leaving to go to Asheville or Atlanta, a bigger city that has more arts-related things going on,” says Clancy. “This is a step in the right direction of what we need for artists living and working in this city, but I think it’s very obvious that some of the problems we have go down to our lack of support for humanities, even at the middle and high school levels.

“It’s a city built on art and there’s not a lot of arts infrastructure here for us.” 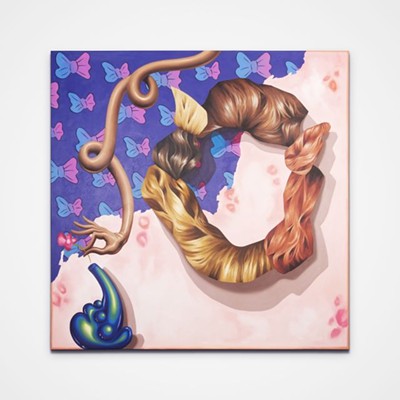 Getting ‘Inked’ at Hen House

Accessible art for all