Owners of Foxy Loxy and The Coffee Fox continue to find niches and solve problems involved with maintaining a successful business. 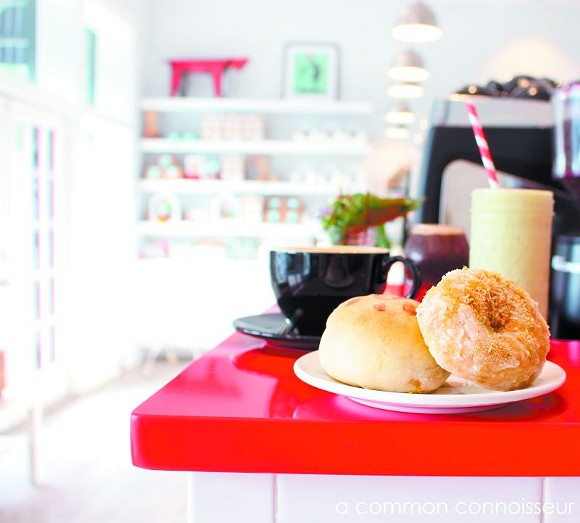 Henny Penny serves as an art space for kids, cafe and wholesale producer for Foxy Loxy and The Coffee Fox.

THE FOXY Family Dynasty is at it again.

First with Foxy Loxy Café in September 2011, then with The Coffee Fox in December 2012 and now with Henny Penny Art Space & Café on April 7, the Foxy Family continues to find niches and solve problems involved with maintaining a successful business.

As a local coffee house that bakes and delivers fresh baked goods to The Coffee Fox daily, the bakery team at Foxy Loxy Café outgrew the kitchen and was in need of their own dedicated space.

So rather than squawking, “The sky is falling” like Henny Penny, Jennifer Jenkins, owner of all three establishments, embraced the adage that every cloud has a silver lining. She did this by searching everywhere for the right property to house a bakery, even the Islands.

“We wanted to be far enough away so that we didn’t compete with ourselves, but we ended up with the opposite of that.”

Ultimately, the new bakery and café now resides in the former Naked Dog and Reality Bites space at 1514 Bull St., only a few blocks away from Foxy Loxy Café.

“(Henny Penny) serves as our wholesale operation to ourselves...it solves so many problems,” Jenkins admits.

Jenkins and staff realize now that “it’s more convenient to be nearby because there is a lot of back and forth from Foxy Loxy to Henny Penny.” 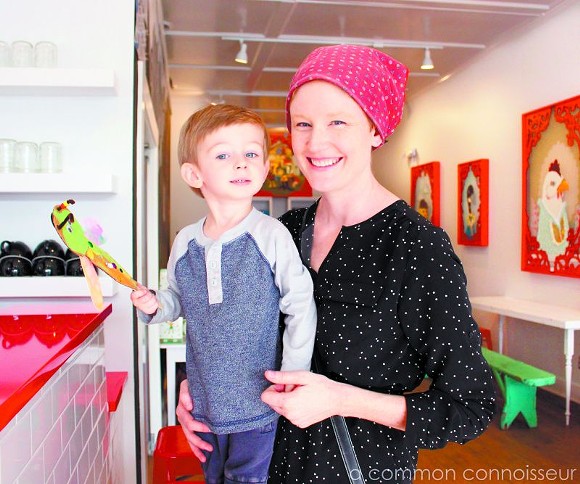 Owner of the Foxy Dynasty, Jennifer Jenkins, enjoys the new space with her son, Ison.

Henny Penny Art Space & Café employs about five bakers, one of which is part owner and back of house manager, Anjel Lee. The bakers make everything from scratch in shifts, like each morning preparing kolaches and scones, then in the evenings, brownies and cookies.

The baked goods are delivered every morning to Foxy Loxy and The Coffee Fox, saving a few goodies for Henny Penny’s bakery display case.

In addition to baked goods, their Cold Brew production happens on the Henny Penny premises. Perc Coffee beans are ground, brewed, kegged and dispersed among all three locations. According to Ehmke, they are serve about 150 gallons of Cold Brew per week on tap.

Along with their wholesale operation, “Henny Penny has a small front of house, with a coffee program and a bake case,” Ehmke explains.

Given that the two Bull Street cafés are right down the street from each other, one may assume they’d be rivals for business.

Think about it, in the children’s folk tale, Foxy Loxy tried to eat Henny Penny. However, Jenkins and management were determined to differentiate the cafés, so that this did not happen.

The first blaring difference is that Henny Penny is also an art space for children. The Foxy Family collaborated with Savannah’s own Scribble Art Studio, to offer a place for children to be creative. The studio resides within the same space as the bakery and café and is open Monday-Friday from 10-4.

For just $5, children have access to art supplies and the support of a Scribble Art staff member. Additionally, Scribble Art Studio hosts weekly events like Play Dough Play-Dates on Tuesdays and Thursdays as well as Petite Picasso classes on Fridays.

Given that the art studio brings families and children into Henny Penny, this separates them from the college-aged patrons of Foxy Loxy.

The next variance between the two cafés is the menu. At Henny Penny, kids have their own Chickadees menu that features treats like Unicorn Hot Chocolate, made with homemade mocha sauce, marshmallows and sprinkles. The bakers also cater to little customers by preparing kid-sized goodies like mini brownies.

Other drink offerings that are exclusive to Henny Penny are frozen milkshakes like the Horchata Latte, made with chilled espresso and Leopold’s horchata ice cream.

When I sunk my teeth into the Key Lime doughnut, it was immediately reminiscent of the tart pie. The doughnut was tender, harmonizing flavors of toasted coconut, graham cracker crumble and lime peel caramel.

It proved to me that vegan doughnuts are just as damn delicious as any other.

Henny Penny also serves Pie Society’s scratch-made potpies as a take and bake option “so people in the community do not have to go all the way downtown to purchase one”.

If you’re in the mood for something savory, Henny Penny serves breakfast kolaches. This is a semi-sweet Czech pastry that was popularized in Texas.

Since Foxy Loxy serves Tex-Mex fare, kolaches have graced the menu for years. Henny Penny bakers make the dough by hand and once it has been properly proofed, they either stuff them with eggs and cheese or nest them, like a Danish, with cream cheese and nutella.

The stuffed pastries each have their own special fillings and are identified by a brown symbol. Take the Sunrise Scramble, which had a minimalistic sun icon displayed on the top of the roll. It was soft like a yeasted dinner roll and cram-jam full of eggs, cheddar cheese, sausage, poblano peppers and sweet yellow onions.

The good news is that the Foxy Family is not done yet. While they have had a few setbacks, this summer we can expect an all vegan café called Fox & Fig.

As a vegan himself, Ehmke will take on the role as co-owner and general manager of the new eatery.

“The goal of Fox & Fig is that it’s not an exclusive place only for vegans. We will serve food that anyone can eat and enjoy.” 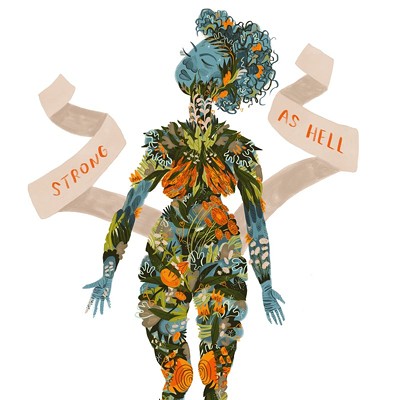