High density housing on the rise

More than a year after it was approved by City Council, One West Victory has finally broken its first ground.

A crane flew an American flag last week at the ceremony heralding the official start of the $25 million mixed use project at the site of the former Savannah Ice Company property. At 124,000 square feet, One West Victory includes the renovation of the iconic buildings between Bull and Whitaker along Victory Drive and will also blanket the corner with new construction for 114 multi-bedroom apartment units.

Estimates of the number of new residents — likely but not limited to students — are between 335 and 350. 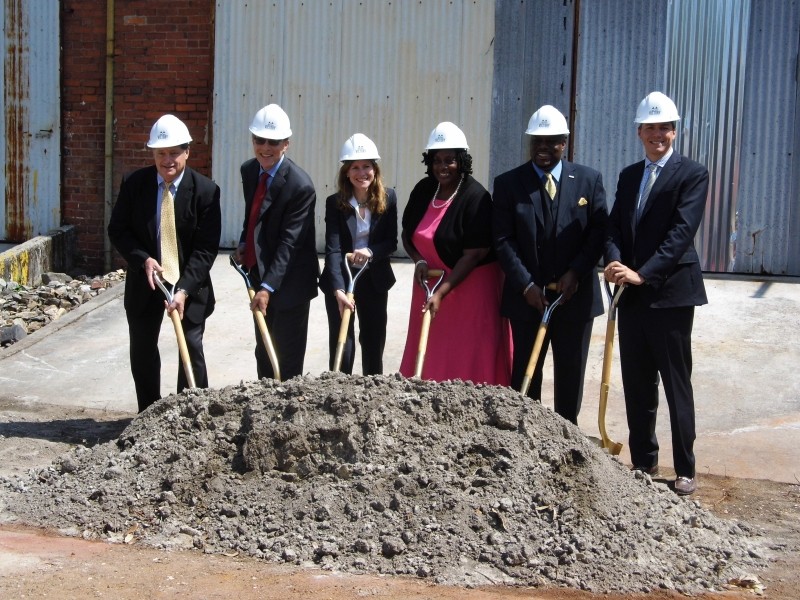 City officials and developers break ground at One West Victory.

Before the project was introduced to the Metropolitan Planning Commission last May, residents from the nearby neighborhood associations of Ardsley Park, Thomas Square and Metropolitan expressed concern about how the increase would affect their property values and quality of life. Jamestown Properties, the Atlanta-based real estate magnate behind high-profile successes in New York and Atlanta, responded by holding three public meetings before it went before the MPC.

Known for its knack in reviving languishing properties to their former economic and community vitality, Jamestown wooed residents with its commitment to LEED-certified building practices, generous greenspaces and thoughtful commercial planning and has garnered celebrity chef Hugh Acheson to head the new restaurant that will open in the 19th-century red brick building. Wide sidewalks and bike racks promise to keep things pedestrian and bicycle-focused at what will be a locus point for several neighborhoods.

"We're excited to be partnering with the local community to deliver a dynamic, student-focused residential community to the historic Starland neighborhood," says Katharine Kelley, Jamestown's Managing Director of Development and Construction.

A rendering of One West Victory shows historic buildings incorporated into new construction.

Though some discontent remains regarding the scale of the four-story parking garage that will border the railroad tracks on the west side of Bull Street, public reception has been mostly positive. Construction is expected to be completed by next summer, and the restaurant will open its doors in spring 2015.

Also bringing new life to a faded landscape is the construction of The Savannah Lofts at the corner of East Broad and 39th Streets. Featuring 36 one-bedroom, two-story apartments with hardwood floors, stainless appliances and off-street parking, the units are meant to cater to Savannah's ever-increasing student population as well as young professionals. The developers have also partnered with the city to revamp the streetscape with improved lighting, new trees and a linear park that will run along the front side of the apartments.

Once a thriving commercial hub that contained Rex's restaurant and Weiner Grocery Store, this stretch of East Broad hasn't seen much action in the last 20 years. The Savannah Lofts development has been in the works since 2000, the days when Michael Brown was the city manager and this part of town had fallen into deep neglect. Owners Fred Krinsky and Bill Hall were able to buy up 14 contiguous properties, with a vision that includes the lofts as well as restaurants and other commercial use.

"We came into the neighborhood during a down cycle...lots of crime, blight, poverty and vacant houses. But it is a great neighborhood, great architecture, great people, beautiful trees and the heart of Savannah," writes Krinsky on the Savannah Lofts website. "Our job is to live up to the expectations we have created and to be a constructive, positive part of the neighborhood."

The Savannah Lofts has also secured HUD funding; each unit will rent for $750 in accordance to the fair market value assessment for affordable housing. Original plans called for a Family Dollar to be built in conjunction with the project, but residents of nearby Baldwin Park rejected that idea.

To keep in line with their elevated vision of the area, Krinsky and his associates are now bringing in former 700 Drayton chef Michael Semancik to open a taqueria in the Shiv's convenience store currently across the street from the new lofts.

"At different points in history it has been a commercial district of its own," says Harley Krinsky, the developer also renovated the commercial strip on Habersham that includes Al-Salaam Deli. "Bringing it back will be great for the whole area."

Both the apartments and the taqueria are scheduled for move-in by September 1.

Also expected to be ready for new residents this fall is Avenues on 61st, the controversial development near Habersham Village. Chance Partners submitted site plans to the MPC last March for the 32 4-bedroom units in accordance to existing zoning for the property, which did not require a variance that would have alerted nearby property owners that 128 more people would be moving into the neighborhood.

After construction began this spring, it became evident that the project was being leased by the individual bedroom for $610 a month. This was not revealed on the original site plan and changed the zoning classification from multi-family to rooming house, increasing the current parking requirements. The Olin Heights Neighborhood Association brought the oversight to city officials, protesting rent-by-the-room policy as well as the project's massive scale.

The developers claim they were not aware that Avenues on 61st violated zoning ordinances and have changed the leasing agreements to conform with city code. In a letter dated May 16, City Manager Stephanie Cutter has also demanded that the developers address issues associated with noise, light pollution, a tree buffer and on-site management, though there is no mention of mitigating the project's excessive height.

Avenues on 61st has no commercial component, though overflow parking is expected to be taken up by Habersham Village as well as on surrounding streets.

Chance Partners could not be reached for comment, but representatives are slated to address concerns at a public meeting with residents and city officials this Wednesday, June 5 at 6pm at the Whitfield Methodist Church on 55th Street at Waters Avenue.

"They can change the wording on the leases, but that doesn't fix the fact that there are going to be too many people and too many cars in too small a space," says Richard Bartels, president of the Olin Heights Neighborhood Association.

"But it's here now, and we've going to have to figure out how to live with it."

"But it's here now, and we've going to have to figure out how to live with it."

The Year in Review: News