Octane Savannah is at 35 Whitaker St.

SOME OF the best experiences come from sitting at a well-built bar and speaking with a well-versed cocktail master. That was my own experience when I dropped into Savannah’s Octane Bar, a bar so new they were still setting up when I walked in.

Bar Manager Chris Hughes is the friendly face that educated me on his handcrafted libations and the story behind the three-week-old bar. As a craft cocktail connoisseur, Hughes worked with the owner of Octane to create the specialty menu.

Sitting between Flock to the Wok and Paula Deen’s, the newly renovated space is now a warm, wood-filled scene. The primary focus of the lounge is craft cocktails, but they also have over thirty selections on draft including two draft cocktails and two draft wines.

Octane wants guests to stop in and enjoy a posh setting after work, after dinner, or even during a bachelorette party. Although the atmosphere is superior, the prices aren’t high, which is a rare find in a city saturated with tourists.

The draft beers are as local as possible. There is an option for all types of bear drinkers—sours, pilsners, IPAs, the whole lot. What they may not have on draft is made up by the bottle selection.

Approximately once a month Octane will have a tap takeover featuring a craft brewery. This month they kicked things off with a tap takeover from Southern Eagle Distributing, Monday Night Brewing, and Wicked Weed Brewing. The day I stopped in I happened upon Octane’s tap takeover event, which was bustling even before the sun went down.

The craft cocktail menu will rotate, but for now it has eleven original and house made libations. Craft cocktail means exactly that – the mixers are handmade and toppers fresh.

“One of the first things we did was create a rosemary and lemon infused vodka with Big Machine,” says Hughes.

“We take a pound of rosemary and lemon rinds and soak it in like five bottles of vodka. So, it is just simple [syrup], lemon, and the cocktail is done. Just shake or stir and it is full of flavor. Another one is a peach and basil infused shrub for the Peach Harvest. This is like a pound of basil, quarter pound of sugar, little white vinegar, and probably twenty-five peaches,” Hughes says.

The Peach Harvest features Old Forth Gin, fresh lemon, and the shrub. A reasonably simple cocktail that tastes every bit as good as the rest on the menu. The house made shrub is the balancing ingredient of the cocktail; it is sweet yet well rounded with fresh green basil and tart vinegar. 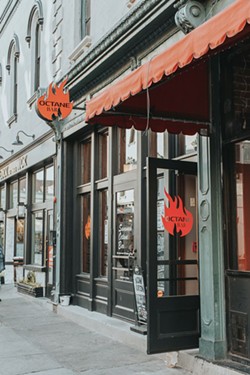 “A big hit is called the Bad and Bouji. It is one of our top selling drinks. It’s actually strawberry and rhubarb, a little bit of egg white foam. Very delicious and it looks sexy. It has a strawberry garnish on top,” Hughes explains.

After hearing Hughes’ recommendation, I tried one for myself. The drink is full of body from fresh, frothy egg whites and delicately flavored from the sweetness of the rhubarb and strawberry. The silky-smooth drink is easy to down in on to two sips.

Almost every specialty cocktail has a story of its creation or a reason as to how it landed on the menu. The story Hughes had to tell for the Mayor’s Mule was this:

“The owner wanted to feature Mayor Adams. He was one of the first Mayors to actually start to clean up the city, probably about fifteen years ago. The Mayor’s Mule is influenced by him. It’s a Fernet mule, something different because you never see Fernet as a cocktail -- everybody just goes around doing shots.”

I agree. It’s the first menu I have seen featuring Fernet in a drink and not just served in a shot glass.

Hughes created the Donnie Darko with Donnie, a fellow bartender at Octane.

The Donnie Darko is a collaboration between me and one of my bartenders downstairs, Donnie. We did a little tweak to his own recipe with a little red wine floater,” he says. “It’s one of those drinks that when you see it, it will catch your eye.”

The title for the Mrs. Parker is self-explanatory for any fans of Friday. It is mixed with Big Machine vodka, muddled rosemary, lemon, and simple syrup.

Located downstairs sits a second bar which features a bigger whiskey menu and a more intimate feel. For example, Hughes says that “the menu is still the same but we have an array of different whiskeys. One of the biggest ones is, we have the entire selection of Boss Hog Whistlepig. Not everybody has that, but it sets us apart from just having a bourbon and coke. We also do whiskey flights so you can have a bourbon sampling.”

Beer flights are available as well, for those who want to try something new and exciting from Octane’s boisterous tap selection.

As an effort to give back to the community, Octane is looking to pair up with SCAD and local artists to feature their art. Any and all featured artwork will be available for patron’s purchase.

The owner and staff plan on pushing forward with events and more menu items. By the end of the year the team plans to open its kitchen and expand the menu options.

“Eventually we will start serving tapas. It is going to hummus, a charcuterie board, bar snacks. All in all, we are taking baby steps to find where we fit in,” he humbly says.

Savannah Octane Bar’s Facebook page has the most reliable up to date information regarding events and parties. Stop in or get online to see what Octane will offer next to its patrons.