History without a license? 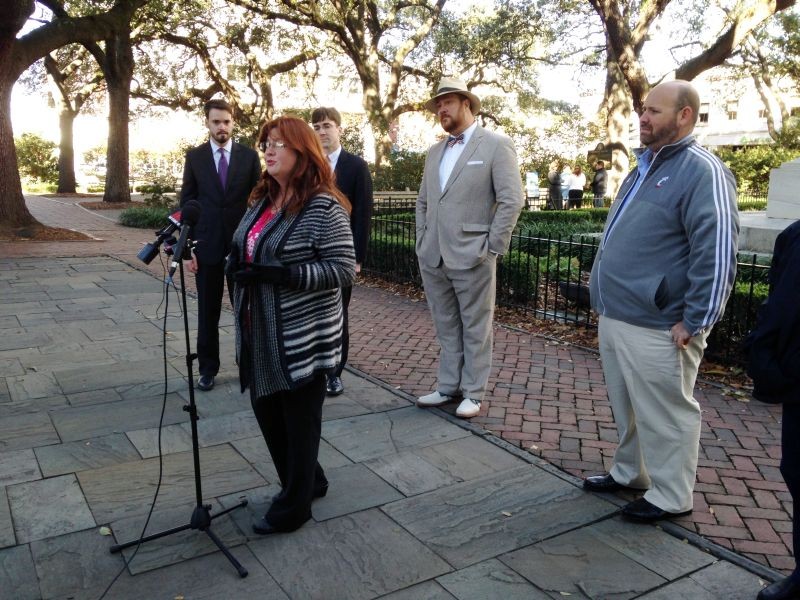 ON ANY given day, you can see a tall gentleman in a seersucker suit leading folks around the squares, telling them stories about Savannah.

But before he could lead a tour, Léger had to pass a 100-question test that cost $100, as well as a criminal background check and a physical exam. He also had to pay for a permit, which must be renewed every year. Without all those ducks in a row, he risks significant fines and possible jail time.

A former police office and soldier, Léger resents that the City of Savannah wields so much control over his business.

Last week, he and a coalition of other local tour guides filed a federal lawsuit against the City to repeal those requirements on the grounds that it violates their First Amendment right to free speech.

“In this country, you shouldn’t have to jump through so many hoops to tell a story,” says Léger.

He adds that passing a test proves nothing about a potential tour guide’s proficiency, and that free enterprise should weed out the incompetent and unprepared.

“Isn’t that what the city does with every other tourism-related business? Hotels, eateries, T-shirts...”

Other plaintiffs Jean Soderlind of Ghost Talk Ghost Walk and Michelle and Steven Freenor of Savannah Belle Walking Tours agree. They’ve enlisted as their representatives the Institute for Justice, a Virginia-based non-profit law firm that challenges what it presents as unnecessary and unconstitutional regulations in business licensing.

“It would be unimaginable for the government to impose similar burdens on other people who talk or write for a living, like journalists, poets or stand-up comedians,” explains IJ attorney Robert Johnson.

“Tour guides are no different from any other storyteller and are entitled to the same constitutional protection.”

The institute has filed similar lawsuits in Philadelphia, Washington, D.C. and New Orleans—all popular historic destinations. In the case of Philadelphia, the city chose to dissolve its tour guide ordinance in favor of self-regulation, and a D.C. court repealed the district’s tour guide laws.

A federal court in New Orleans recently chose to keep its city tour guide regulations intact, leading the institute to send the lawsuit to the U.S. Supreme Court.

The federal lawsuit in Savannah and a similar one filed with the U.S. Supreme Court last Tuesday ask the court to strike down the City of Savannah’s Tour Guide for Service Ordinance, which applies to motor coaches, trolleys and walking tours. It includes all regulations imposed on tour guides as well as a $1 preservation tax per adult each tour.

Freenor also wants to see the physical exam eliminated. “I’m not an employee of the city. My health isn’t any of their business,” she declares.

Fellow tour guide company owner Soderlind agrees with the point that the 100-question test doesn’t regulate the quality or veracity of themed tours that focus on films, food and non-historical information.

“There’s not a single question on the test about ghost stories,” points out Soderlind. “How does that even apply to my tour at all?”

Bridget Lidy, the City’s Director of Tourism Management and Ambassadorship, counters that the licensing process establishes a framework for tour guides to use when discussing Savannah history. It also prevents too many guides from flooding the squares at one time.

There are approximately 330 licensed tour guides in Savannah, though not all of them are active, says Lidy.

“We don’t regulate private business. But when a guide goes and interacts with the public, they are technically an ambassador.”

Lidy is also frank that revisions to the tour guide ordinance are long overdue.

“The ordinance was created in 1977, and the tourism industry has grown exponentially since then,” she says, explaining that her department was created earlier this year for the express purpose of updating the regulations and possibly jettisoning the physical exam.

The Tourism Management and Ambassadorship Department sent out 2,000 surveys to hospitality workers last month, including licensed tour guides. The collected information will be rolled out in a public council work session in the next few weeks.

“We’re going through it point by point, looking for places that need to be modified,” says Lidy.

“We think the bulk of tour guides out there think this is a good tool, and we’re trying to come up with a better system.”

Old City Walks owner Phillip Sellers concurs that an update at the local level can solve many of the problems touted by the plaintiffs.

“I really believe the federal government should stay out of it, period, including the Supreme Court, although the local ordinance is way outdated in this regard and needs a re-write,” says Sellers, who specializes in architectural and pre-Civil War historical tours.

“Savannah should be deciding its own rules.”

An avowed entrepreneur (he also owns and operates the Savannah Tour Guide Institute, which helps prospective guides prepare for the test and develop a professional persona), Sellers nevertheless says he does not necessarily trust the free market to solve issues like overcrowded squares and amateur tour guides.

“Consider that the top ranked Savannah sightseeing tour is a company that has not done a tour in nearly a year, and that another high-ranking tour operator has been dead for six months,” he points out.

“It’s also worth noting both TripAdvisor and Yelp are being sued for corruption in several markets,” Sellers adds.

There is also concern that the agenda of the Institute of Justice isn’t solely about tour guides’ well-being.

According to non-profit watchdog siteSourcewatch, the IJ was founded in 1991 with seed money from the Charles Koch, the eldest of the billionaire Koch Brothers who infamously fund conservative political and anti-environmental campaigns.

IJ attorney Johnson assures that the organization is non-partisan and maintains a mission of restoring the constitutional limits of government for the American people.

“The institute has over 8000 individual donors, and the Koch Brothers donate less than one percent a year to our operations,” says Johnson.

While Sellers understands the frustration of his fellow tour guides, he believes that total deregulation and litigation at the federal level isn’t the way to improve the business climate.

“This is a touchy issue for certain, and I appreciate their perspective. They’re my colleagues, I respect them,” says Sellers.

“I just think we are fully capable of solving these issues ourselves.”