Hitch: 'This is for the locals'

Welcoming the brainchild of the visionaries behind Treylor Park 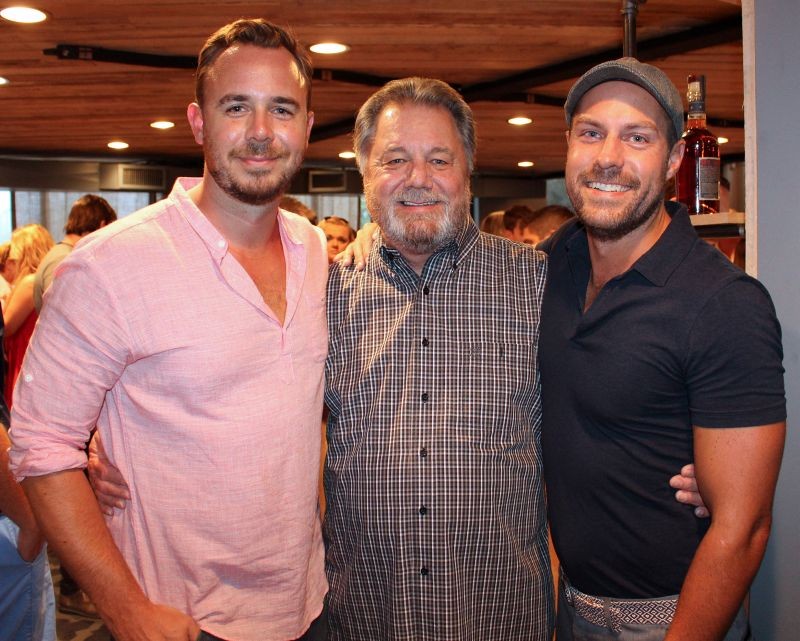 TREY WILDER, with partners Bill Wilder, his father, and Rick Kunzi, proudly walked around greeting customers while immersing themselves in the bustle of their latest quirky restaurant experiment, Hitch.

A lively crowd piled into the recently renovated space on July 15, the night of Hitch’s Grand Opening. With just about 60 new staff members, Hitch’s bartenders and waitstaff had their hands full as they enthusiastically served eclectic menu items as passed hors d’oeuvres on the house.

The bar, several people deep, earnestly served wine, beer and an array of specialty cocktails. Grape Vodka Soda and Infusion Flights, such as Smoked Bacon Bourbon, were in high demand. This opening was every bit of grand.

After Treylor Park’s success with first locals and now predominantly tourists, owners sought to create a restaurant similar to the one on Bay Street, but with a few tweaks. Although Treylor Park has a strong local following, the two-hour wait may deter faithful followers.

“This is for the locals,” Wilder declares. With locals helping them get Treylor Park on the map, Wilder reports that they want to “give back” to those people.

There is such a strong dichotomy between fine dining and dive bars in Savannah, but not a lot of in-between restaurants. Hitch “meets in the middle,” Wilder affirms. Its vibe, price point and cuisine appeal to a variety of people from all walks of life.

Although Hitch and Treylor Park have parallels, Wilder states that he did not want to “copy and paste” the new restaurant to its older brother.

While Hitch maintains the integrity of what makes the original restaurant so special, it is a slight step up, making it Treylor Park 2.0.

The brick building off of Liberty and Drayton, that once housed the Granite Restaurant and Bar, is now home to the one and only Hitch. Hitch, the brainchild of the enterprising visionaries behind Treylor Park, inherits its name from the concept of a trailer hitch.

“It’s an extension of the original Treylor Park,” Trey Wilder, co-owner of both establishments, illustrates its figurative meaning. Wilder’s aspiration, to establish a noshery for locals that offers eccentric food and drinks at approachable prices, was skillfully executed.

“The space had a good footprint on it, it just needed some character, textures, life and energy,” Wilder admits, referring to the space that had once been occupied by the previous tenant Granite.

With minimal construction, removing one of the previous bars and dividing the restaurant into two spaces, the bar side and the restaurant side, Hitch was able to open two weeks after the initial set date, and it did not disappoint. The industrially designed ambiance displayed liberal use of exposed brick walls, with distressed wooden elements, metal features and copper-tone accents, all set under the rustic glow of Edison blub lighting.

Hitch’s take on Southern bar fare reinvents comfort food in a quirky and unconventional way. Their menu offers 35 unique twists on otherwise well known items, some of which originated at Treylor Park.

From the Nachos Grande to the PB&J Wings, many popular eats made Hitch’s whimsical southern menu. Wilder’s reasoning? “If it’s not broke, don’t fix it.”

We all tend to agree. However, it is clear Wilder and crew sought to “take it up a notch” by incorporating higher quality ingredients such as Mini Lamb Chops, Beef Carpaccio and Whole Quail into Hitch’s menu. Aside from menu similarities, the primary focus was to “tweak the plating and presentation” at Hitch. 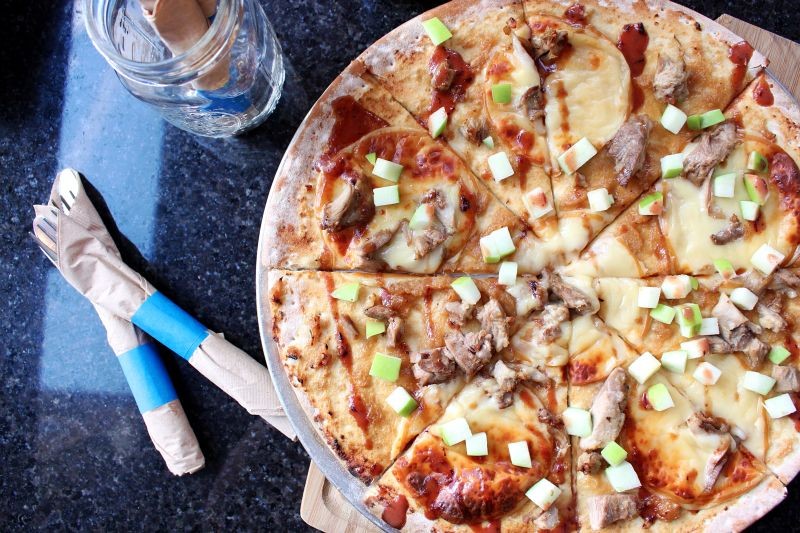 Unlike Treylor Park, Hitch’s menu is predominately sharable, making it ideal for the indecisive foodie. Hitch encourages patrons to pass the plates and eat with their hands. The result is a trendy tapas-like restaurant that is perfect for Savannah.

Hitch’s menu flirts with playful flavor combinations that sound exciting on paper and deliver on the plate. On the carefree Sunday afternoon after Friday’s Grand Opening, I had the opportunity to indulge in some of these enticing shareable eats with a few friends.

Given that we all had different cravings, we happily compromised by picking one item that tickled our fancy and sharing them. I had been eyeing the Duck Confit Pizza Pie, made with homemade dough and topped with slabs on melted smoked gouda, slow cooked duck, onion marmalade, diced green apple served with drizzled blueberry vinaigrette. The crust served as an edible plate, highlighting the freshly cut smoky cheese and richly pungent duck. The bright crunch of apple sang with the sweet onion jam and zippy vinaigrette. At $15, it’s the most expensive item on the menu, but is 14 inches of sweet and savory delightfulness. 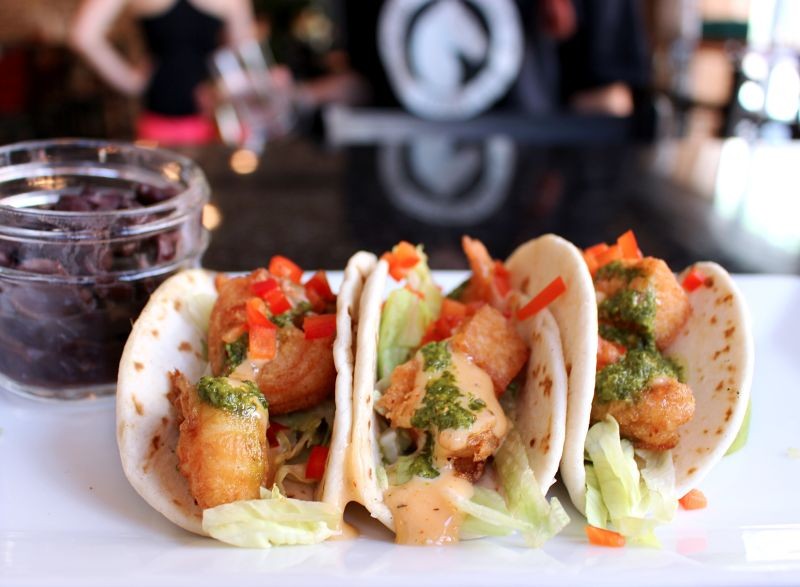 Hitch serves a unique twist on the classic Shrimp and Grits.

Next, we sampled a unique twist on the classic Shrimp and Grits. This taco filled with fried grit nuggets and crispy shrimp dressed in a splash of vibrant chimichurri sauce and creamy chili aioli did not disappoint. The black beans, served on the side, were not an afterthought, as they were flavorsome with bits of bacon hidden inside. In this dish, Tex Mex met the Deep South and their sultry marriage was intriguing.

Lastly, we dug into the Fried Quail and Donuts, a snappy take on the brunch staple, chicken and waffles. The quail was delicate, complimenting the crisp peppery batter that encrusted it. In our opinion, quail was a good choice, as chicken would have been too dense and overpowering in this dish.

The house-made donut was light and airy with a faint sweetness. The chunky habanero peach salsa, that topped the donut, provided an intense natural sweetness followed by a swift kick of heat from the pepper.

While Hitch has found its niche of serving vibrant and high quality ingredients at affordable prices, a concept that is lacking in the downtown Savannah area, Wilder, Kunzi and Wilder have aspirations to build a brand. Wilder expressed intent to open a new restaurant every year for five years. This “controlled growth” makes the demanding restaurant business a more gratifying experience, thus reducing the burnout rate. 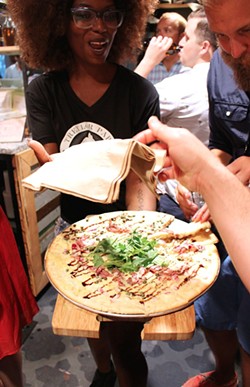 Next year, we can anticipate a beachy joint on Tybee with seafood-forward grub. Wilder divulged that their future plans would expand to Hilton Head and surrounding areas.

And finally, as I sat and watched Trey Wilder and his partners weave through their new foodie disciples, I could not help but recognize the pride in their faces. The night was truly a success. One can even dare to say, it went off without a Hitch.