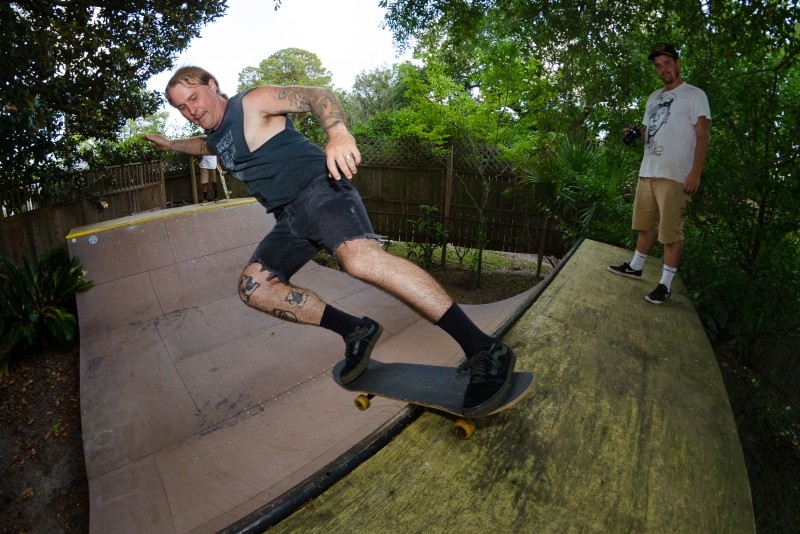 RIGHT NOW, Chatham County's only public skate park may not look like much, just a patch of graded dirt and a sign that says "Coming soon."

But with a little luck and a little more money, next spring the air around the southeast shore of Lake Mayer will be filled with whoops, hollers and the joyful sound of wheels grinding on concrete.

It’s been five years since the Chatham County Skatepark Supporters signed a 20-year lease on a piece of the county-owned recreation complex, and progress has been slow but steady. Over $160K has been raised for the project, and a killer design from Orlando-based Team Pain is ready to go.

Last week’s groundbreaking marks the nonprofit’s most major milestone yet. 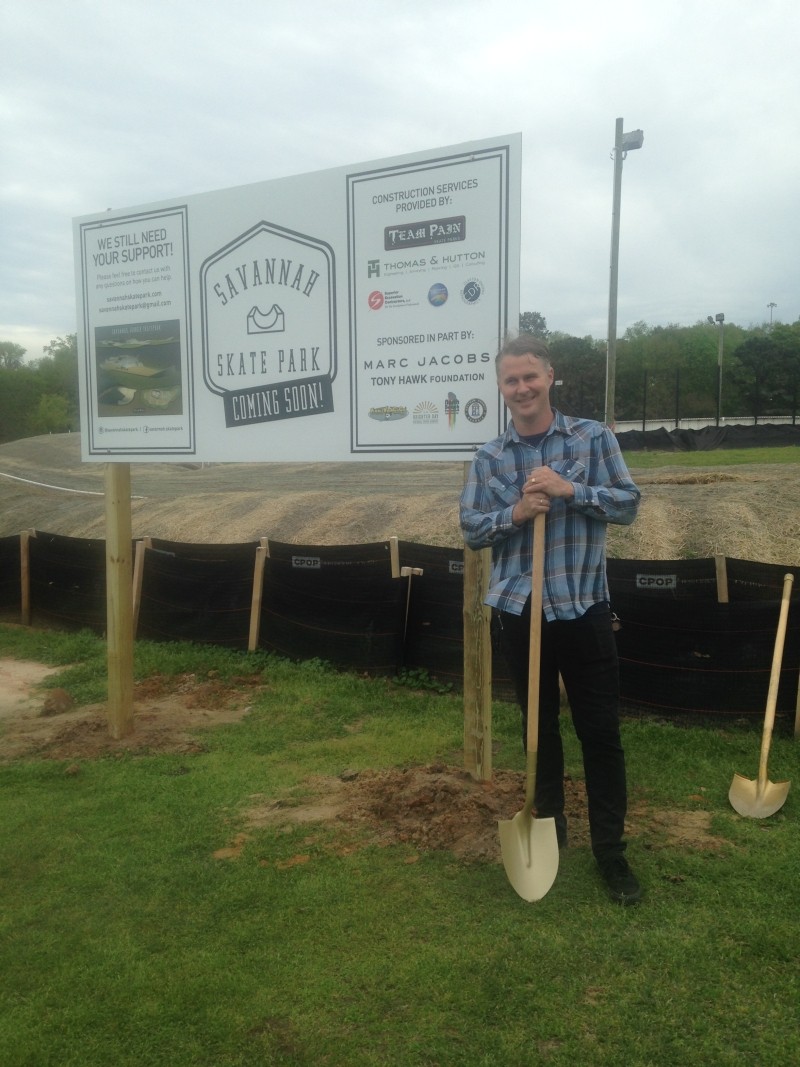 “This will be the first time in Savannah that there will be a legit, free spot to skate.”

Looking rather legit himself these days with close-cropped hair and a button-down shirt, Maher has waited more than 17 years for such a place. The native Savannahian spent his formative years riding in empty swimming pools on the Southside, on hand-poured ramps in Midtown and along any available handrail on River Street.

He’s traveled all over the country checking out municipal skate parks and has devoted the better part of the last decade working to create one close to home.

After negotiations to establish a park on Tybee Island soured in 2006, the concept found a haven at Lake Mayer thanks to support from then-Chatham County Commission Chairman Pete Liakakis.

“It will get young people outside and occupied with recreation and keep them out of trouble. That improves our quality of life in Savannah,” Liakakis told Connect in 2011.

But the Commission’s blessing didn’t come with a single taxpayer penny, so Maher has continued to seek donations and write grants as nearby Bluffton, Hilton Head and Brunswick funded and built their own their free parks—a testament to what can be the molasses-pace of progress in Savannah.

“Now that we’ve broken ground, I bet Pooler gets one now like that—” laughs Maher, snapping his fingers.

No matter; to Maher and his crew, the homegrown efforts makes their success that much sweeter. They convinced fashion icon Marc Jacobs to bequeath almost $100K of skate-themed T-shirts sales to the effort, and CCSS recently awarded $25K from the Tony Hawk Foundation, which seeks to empower youth by supporting clean, safe, legal places to skate. (No promises, but it’s likely that Mr. Hawk Himself will pay a visit to the new park once it’s finished.) 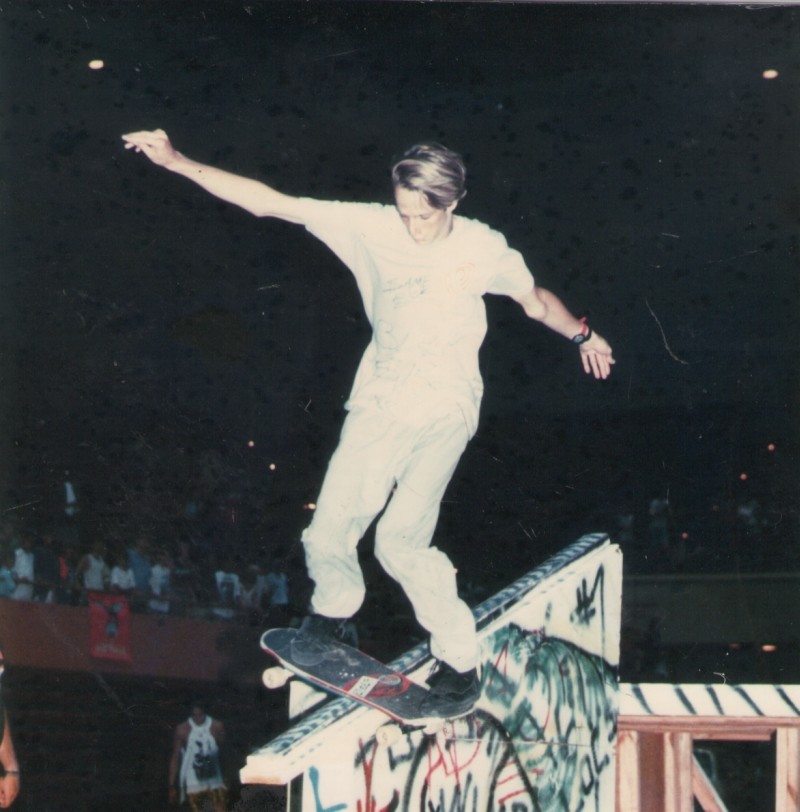 Apart from privately-owned Woody’s Skatepark, skateboarders in Savannah have had to travel or practice their nollies and nosegrinds illicitly (which, for some, is part of the fun.)

But even the cops agree that skateboarding doesn’t have to be a crime. Instead of writing tickets in the past few years, some sympathetic SCMPD officers have reportedly been directing skaters to homemade courses out of the way from the tourist traffic.

(The most popular of these DIY spots, near the homeless encampment on President Street, was razed during recent construction.)

“It helps that skateboarding has been mainstreamed in the media,” says Maher. “People see that there are kids out here getting good at something.”

He acknowledges that the public park wouldn’t be possible without the dedication of those who have nurtured Savannah’s skating community “on their own time and dime” through its beat-ups and teardowns.

One is Keith Saunders, co-founder of Loose Leaf skateboards and a 20-year veteran of the southeast street skate scene.

“This is a huge gamechanger,” says Saunders.

“People will come to Savannah just to visit this skate park.”

Saunders points out that Savannah actually has a formidable skateboarding history. Though he was just a wee grommet back then, he remembers Savannah Slamma, a pro skater exhibition that filled the Civic Center with spray-painted wooden half pipes and slapped-together rails for three years in a row in the late 1980s. (Yes, children, the legendary Tony Hawk, Steve Caballero and Christian Hosoi shredded the inside of MLK Arena long before the X Games and XBox were even a thing.)

Savannah Slamma was conceived in 1987 by then-18 year-old Tybee Island skater boy Tim Malins, who decided out of the blue to call up Thrasher magazine’s Fausto Vitello to see if he’d be interested in hosting a skating exhibition in Savannah.

To his surprise, Vitello flew to Savannah for one day to broker a handshake deal that included an admonition that tickets be kept cheap so that every kid could attend.

“The whole idea was to put street skateboarding on the map in Savannah,” remembers Malins, who went on to work for Powell Peralta Skateboards and now runs the Board Loft at High Tide Surf Shop on Tybee. “I think it worked out pretty well.”

Adding to the legacy is the fact that the whole event was taped by then-unknown skate video mogul Stacey Peralta.

Since the early 2000, another scene stalwart has been Todd Maloy, who grew up with Maher and serves as the skatepark’s graphic designer and illustrator. Maloy also documents his buddies’ kickflips and other tricks in Red Brick Zine, which recently published its second issue.

No homage to the Savannah skateboard community would be complete without a deep gnarly bow to Woody’s Skatepark, a battered collection of ramps and rails built around the old Windsor Forest neighborhood pool.

Owned and operated by skaters Boe Parries and Fabio Silva, Woody’s has cradled skateboarders of all ages and abilities since 2004 and also boasts the area’s only dedicated independent pro skate shop. Anyone can skate all day for a $5 admission fee, and Maher, Saunders, Maloy and every other locals has skinned a knee or two here.

“This is a culture where you can meet people of all races and backgrounds, boys, girls, whatever,” says Parries, who does his best to keep Woody’s atmosphere family-friendly and non-competitive.

While he’s glad his favorite activity has gained popularity in the past two decades, Parries has no patience for posers or aggro types trying to get themselves hurt.

“Skateboarding was never meant to be a sport with money involved and prizes. It’s supposed to be about having fun with your friends.”

While some longtime locals express concern that Woody’s will suffer from the opening of the free public skatepark next year, Parries fears no such competition.

In fact, he’s stoked that local skaters will have more options.

“The more places there are to skate, the more people there will be who want to check them out,” he figures.