Photo courtesy of Anthony Lanier II
Anthony Lanier II visits with fans during a NFL game to sign some gear.
Savannah native Anthony Lanier II consistently defies expectation. For the unaware, Lanier is the city’s latest example of a person who physically left town, but emotionally is always present. Lanier is a 6-foot, 6-inch, 285-pound defensive lineman for the Saskatchewan Roughriders of the Canadian Football League. He spent five years in the National Football League before moving north of the border. Lanier’s not only working hard to stop opposing offenses, but also to ensure the success of young men in Savannah. In a time where many chide millennials for being unfocused, lazy or egocentric, 28-year-old Lanier is clearly anything but. The commitment to the betterment of the people and the place he calls home is crystalized in what he describes as “my number one goal” once he made it to the NFL: start a foundation. “I care so much about my community,” he said. “This is why I had to make the foundation, because this is my community. This is my city, my people.” After going undrafted in the 2016 NFL draft, despite outstanding results during his time at Alabama A&M, he signed a rookie free agent contract with the Washington Redskins. He made the 53-man roster as an undrafted rookie — a monumental task that doesn’t happen often — and then formed Undefeated Warrior: The Anthony Lanier II Foundation. The foundation aims to support community-based organizations to promote education and good health as a means to foster the development of the character, social skills and values in young people across the city — values imparted to him by his family. While raised by his mother, Yolanda, in a single-parent home, Lanier didn’t lack for strong male influences. In addition to his mother, several uncles, like Sonny Powell, Elijah Powell and his late uncle Terry Powell, helped instill a strong work ethic and a determination to aid his community. “We worked with the City and the church,” he said. “They had me going around picking up trash on senior citizens’ lawns, helping out with food banks and stuff. They molded me.”
click to enlarge

Photo courtesy of Anthony Lanier II
Anthony Lanier is spotted while traveling. The pro athlete said Savannah will always be his city.
Those values show in many of the things the foundation does today. Perhaps more importantly, Lanier isn’t shy about his desire to have a significant impact around town. In fact, he declares it on the foundation’s website, listing its goals for all to see, such as: • Model and exemplify hard work and determination, • Reiterate the importance of education and staying in school, • Encourage youth to set both short-term and long-term goals and work hard to achieve them, • Host football camps in the Savannah-Chatham County, Georgia area to encourage teamwork and develop character and everyday life skills and • Establish mentorship programs for high school student-athletes in the Savannah-Chatham County, Georgia area to assist in preparing student-athletes for post-secondary options. It doesn’t take long to see that Lanier views his involvement in the football camps he puts on as a quick way to reach out to kids across the city and have a big impact. He doesn’t just run through drills, but with help from many coaches and former players, the kids are taught the importance of technique, teamwork and being good sports. In addition, the participants also learn about nutrition, exercise and more. In fact, Lanier said they held a career fair recently, giving the kids a chance to see how their personal interests could lead them to a job that will ultimately shape their lives. Savannah sports fans will recognize the importance of the first part of the foundation’s name, as Lanier is a proud alumnus of Jenkins High School. “Warrior nation,” he’s quick to proclaim during a conversation. The fact that he’s a Warrior at all is a bit surprising. Like so many talented athletes, Lanier grew up playing a variety of sports at the recreation center in his Carver Heights neighborhood. Drawn more to basketball, coaches from Jenkins - impressed with his athleticism - came to his home and spoke to him and his mother about playing football and basketball there. “I didn’t know too much about football,” he laughed, but by the end of the meeting, he was set to go to Jenkins. However, even after agreeing to play both sports, he favored basketball, but the coaches clearly knew better telling him if he didn’t play football, he couldn’t play basketball as a high school junior.
click to enlarge 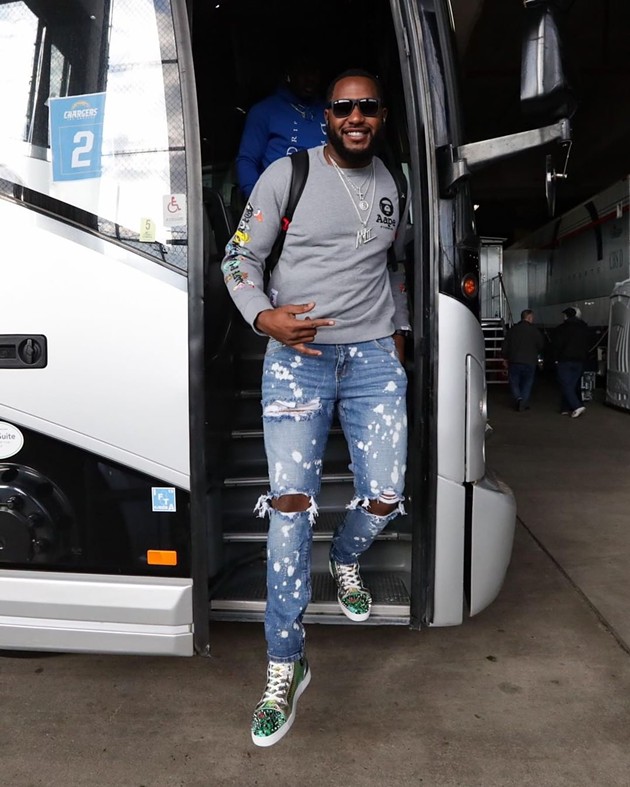 Photo courtesy of Anthony Lanier II
Anthony Lanier II exits the bus on his way to play a game for the Chargers.
That was only confirmed when he was pulled out of class to talk with coaches from colleges recruiting him to play football. Lanier quickly realized focusing on football would pay his way through college and, as he pointed out, coming from a single-parent home, helping his mom out by getting a scholarship eased a massive burden. It also cemented his appreciation for education, which is a critical component of the foundation. In addition to the football camps, the foundation also helps with donations for food banks, and it hosts an annual golf tournament to raise money for community groups around the city. Learn about Undefeated Warrior: The Anthony Lanier II Foundation, by visiting undefeatedwarrioraml2f.org. To keep tabs on Lanier and his career, go to anthonylanier.com.