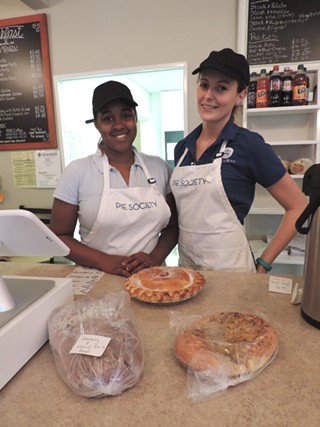 You can get Pie Society's savory specialties hot and ready to eat, or cold and ready to take out for reheating later at your leisure.

THE TOWN of Uttoxetter in Staffordshire is a pretty, sedate little place with a long history that stretches back to the Roman occupation. One thing the local housewives are known for is their fine meat pies.

It’s just a common knowledge kind of thing that gets passed through the generations, rather the way a good pan of cornbread or the perfect Shrimp n’ Grits does here in the South.

Men there are no strangers to the art of baking, either, and Edward Wagstaff started early learning the basics and rode the wave from then on out, starting at age 14 to hone his skills in a local bakery, adding fishmonger and butcher along the way, to support himself throughout college.

When Edward’s oldest sister, with the lovely Austenian appellation of Emma, moved here to Savannah to work at the British-owned company JCB (whose eye-catching landscape graces I-95), news began to trickle into the family network about a Southern city with British roots—and possibly a taste for British pies.

Mom Gillian, weary of the rainy English weather and wanting to flex her business acumen gained from long years in retail, talked things over with her boy, and they decided to set sail toward this land of azaleas and palm trees.

Pie Society was born in Pooler early last year, and, lucky for us, has just opened a new store in City Market in Savannah.

Edward is the Master Baker, creating savory meat pies from centuries old recipes with ultra-fresh ingredients, and expanding that into delights like the Victorian Spongecake filled with English cream or the famous Bakewell Tart, made with a buttery pastry filled with raspberry jelly and a scrumptious almond marzipan, crowned with a snow white glaze.

All the beautiful assortment of pies, both sweet and savory, are created by him in his Pooler kitchen, then taken to the Savannah store in the pre-dawn hours to be baked fresh and hot for hungry customers.

The City Market location is small but cozy, decorated in bits of Anglophilia like a cherry red teapot, an off-white antique hutch with it’s neat line of tea containers, an antique board with serving bells that bring to mind Downton Abbey, and the cheerful countenance of the youngest Wagstaff sister, Melissa, brightens the small space immeasurably.

Neat and pristine as your grandmother’s china cabinet, there are little delights in every corner, like the pairs of British Royal guard shakers or the cast-iron crown candleholders that add a whimsical touch to each table.

Americans usually tend to associate the word “pie” with something sweet, but the headliners here are mostly savory: thick, golden crusts that hide rich and hearty gravies, big chunks of beef or chicken, country herbs and fresh vegetables. The closet thing we have here is the familiar frozen pot pie, a pale imitation of the robust English cousin.

The meat here is tender and succulent, the gravies intense in flavor, and even the carrots have a delicate sweetness that tells you they never saw a freezer.

My daughter and I like the Pork n’ Apple pie, traditionally served cold—the apples add texture, not sweetness—cut in firm chunks and dipped in mustard. The Cornish Pasty was a mainstay among miners who had to eat quick meals by hand between shifts, and is delicious hot or cold.

Ask Melissa and she’ll tell you the local all-time faves are the Steak n’ Ale pie, the scent of which will pull you in even before you take the first bite, or the finely herbed Chicken and Thyme pie with its creamy sauce and tasty pieces of tender vegetables.

I ask her which ales her brother uses—“Oh, even I don’t know! He’s very secretive with his recipes. He has his own selection of British ales that he keeps to himself!”

Whatever the brand, the results are so tasty you may find yourself tussling with your mate for the last bite!

Those with a sweet tooth with be well-pleased with the familiar Bread Pudding, so dear to Southern hearts, buttery English shortbread, ginger cookies and the loveliest old-fashioned Apple pie (large or in individual servings) I’ve seen in a long time.

If you have an inclination towards the fabulously rich, I suggest the Millionaire Bar: a thick, golden shortbread layered with toffee caramel and topped with thick chocolate—I grow faint just thinking about it!

Pie Society offers s a wonderful bundle of homey breads to take away as well, at very good prices, like Cranberry Walnut, Rosemary with Sea Salt or the nicely chewy Cheese n’ Tomato.