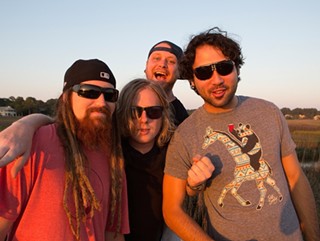 AFTER OPENING two successful bars, Chris Clarke was ready to branch out.

Seed Eco Lounge, the posh, stark-white club on Montgomery Street right off of Congress, had people winding around the velvet rope barricades to get inside and dance all night. Rogue Water had taken off as a destination for craft beer fanatics, offering a more relaxed atmosphere and ample outdoor space for brews and conversation.

When Retro on Congress folded, Clarke saw an opportunity. With an amazing location on Ellis Square, across the street from Lady & Sons, snug between Club 51 and The Jinx, he made plans for a music venue.

Barrelhouse South opened in March, and local bands and music fans have been singing praises for this new place to perform and see shows in Savannah.

“There’s a big opportunity for music in Savannah,” Clarke says. “I own two other bars, so I’ve seen a lot and had a lot of experience. I bartend too, I’m in the bars, and I’m the same age and demographic as the people I appeal to. I can see opportunities that an older guy coming in and owning a bar doesn’t.”

The space was once occupied by Mercury Lounge, a bar that had its devoted regulars as well as its tourist crowd. A little divey but always homey, Savannah bands like The Train Wrecks were frequent entertainment.

That balance of local and tourist appeal and accessibility of bands was an inspiration for Clarke—locals have a new, reliable venue for music, and visitors exploring Congress Street’s offerings can get a taste of downtown’s original flair.

Lots of changes have been made to the space to make it, first and foremost, a venue. In addition to replacing a sound system that had been around since the Mercury Lounge days, Clarke built a new stage, adding around 30 additional square feet to it. Little touches, like opening up a window that was closed off by an office, allow passersby to have a straight-shot view of the band.

“We’re working really hard at it,” says Clarke. “But it’s a huge job to manage music and get the right bands in here.”

Clarke is eager to show footage from electronic powerhouse Archnemesis, who packed the bar on October 9, dropping beats and bouncing his laser show off of every possible surface.

“We have people coming down from Atlanta, Charleston, just to see the shows,” Clarke says. “Driving for a free show!”

The “free” part is important to the nature of Barrelhouse South. Clarke hopes to maintain Savannah’s amble-worthy nature and provide top musical acts for everyone to enjoy—whether they just want to catch one song, or stay for the entire evening.

“I’m not really into the cover thing, because that’s not Savannah,” says Clarke. “Savannah’s such a barhopping and walking city that the cover charge is a deterrent to so many people.”

He opts to pay bands a percentage of bar sales instead of the typical cover charge.

“It’s kind of a line we walk, being with this to-go cup thing and being downtown. People love that about Savannah, so I don’t want to take that away from them by charging a cover and forcing them to stay,” he says.

If you haven’t been able to visit Barrelhouse South yet, Halloween will be a great introduction. They’ll open at 4 p.m. for the Nightmare on Congress Street bar crawl, with bands onstage from open to close.

General Patton & the Heads of State kicks things off, followed by KidSyc.

Savannah’s reggae/rock/funk four-piece, Kota Mundi, round out the evening. A Barrelhouse South favorite, they’ll be celebrating the release of their new, self-titled EP, which is available for pre-order on iTunes.

It’s an All Hallow’s Eve throw-down showing off Savannah’s talented local pulse. Clarke welcomes bands from the area to his stage, and will continue bringing in touring bands, as well. With our town’s allure and Barrelhouse South’s convenient location right off of Ellis Square (“the heart of Savannah,” notes Clarke), he is confident that his hometown’s charm has done half the work.

“Savannah’s got a big name for a small town,” he says. “It has a draw that is helping us just by being the city that it is.”