How did Minnesota diverge linguistically from "duck duck goose" to "duck duck gray duck"? This mystifies me. My wife, a native Minnesotan, told me about this years ago, much to my puzzlement.—SlackerInc 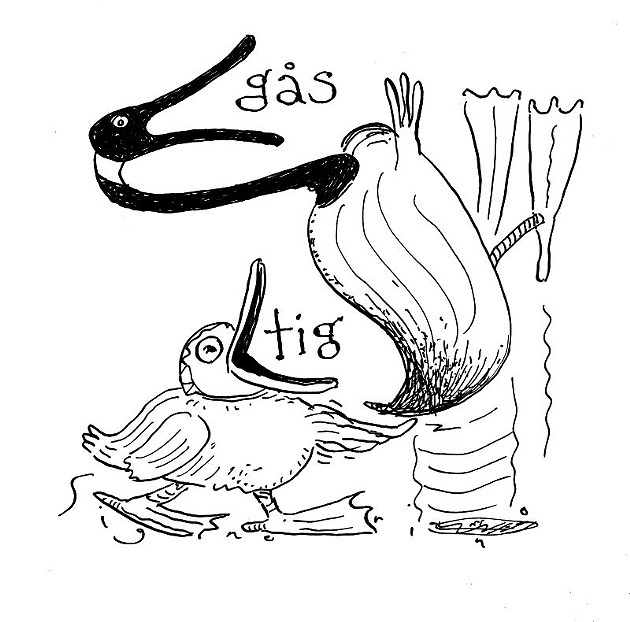 AS great mysteries go, it's not quite up there with the lost colony of Roanoke. You may have heard it mentioned, by your wife or Garrison Keillor or someone, that a bunch of Scandinavian settlers put down stakes in Minnesota over the years. Well, they and their progeny called the familiar kids' game duck-duck-gray-duck because that's what people called it back in the old country—in Swedish, it's anka-anka-grå-anka.

It’s just one of those immigrant contributions that stick. Irish and Scots brought fiddle music; Hungarians brought goulash; Swedes brought duck-duck-gray-duck, which endures in the upper Midwest. There is a Swedish variant equivalent to the standard American name, called anka-anka-gås. But the gray duck’s the one that made it across the ocean.

In departing from duck-duck orthodoxy, the Swedes are hardly alone. In the Indian rumaal chor, for instance, one player, the “thief,” runs around a seated circle of fellow participants, who extend their arms behind them; when the thief drops a handkerchief somewhere along the way, whoever grabs it becomes the thief’s pursuer. The South African game of vroteier (“rotten egg”) is similar.

When we talk about duck-duck-goose, we’re talking about a glorified version of tag—a word from the Middle English tek, meaning “touch” or “tap,” having perhaps made its way to modern usage via the Scottish tig. In some parts of the British Isles the game is still called “tig,” in others “tag,” though it’s “tip” in North Wales, “tuggy” in Newcastle, and “dobby” in Nottingham.

See where I’m going? It’s not that upper Midwesterners have their own occult version of a popular American game; it’s that children everywhere use different names for some variation on the very same thing.

Kids have been doing this since antiquity, too, and over the centuries they’ve found ways to put their own whimsical little spins on it, as the Encyclopaedia Britannica notes: “In some variants the children pretend that the touch carries some form of contagion—e.g., plague (Italy), leprosy (Madagascar), fleas (Spain), or ‘lurgy fever’ (Great Britain).”

I suspect it’d make sense, though, to the German philosopher Karl Groos, who around the turn of the 20th century wondered what it was that made young mammals engage in play. Play doesn’t quite make sense, after all, from an evolutionary perspective: you’re expending energy that’s not going toward some big-ticket goal like finding food, defending your young, or procreating. And burning energy needlessly is the best case; in the worst, you’re exposing yourself to physical harm, from broken bones to concussions, for what would appear to be no good reason.

Groos’s answer was that play is common in young mammals because it’s a form of practice for behaviors that will be important throughout an animal’s life. Escaping someone in a game of tag? That’ll get you into shape to outrun some future predator.

In a significantly more recent article, the evolutionary psychologist Peter Gray tries to make the case that all formal team sports are variations of tag—a three-year-old playing tag and an NFL wide receiver are both outrunning a pursuer, Gray points out. Gray thinks that where an animal sits on the food chain may influence whether it has more fun chasing or being chased: for monkeys or squirrels, he writes, “the animal being chased shows the greatest pleasure in the game”—they need the practice outrunning predators; he places humans in this category too—whereas dogs like to chase cars because they’re more evolutionarily inclined to be the predators.

Researchers are only beginning to come to terms with how widespread play is in the animal kingdom. It was once thought that only certain mammals and birds wanna have fun, but we’ve more recently observed playlike behavior in fish, reptiles, and even invertebrates like wasps and octopuses.

Accordingly, we’re diversifying our understanding of why animals play. Simple survival instinct may be the beginning, but it may also be, for instance, that animals play in order to learn boundaries in their communities—how hard they can bite, for instance, without pissing their pals off.

What with the torrent of discouraging stories that’ve come pouring out since the Harvey Weinstein news broke, one might argue there’s a lot of male humans out there who could stand to play another million rounds of Simon Says.