How do we know poisons are tasteless and odorless? 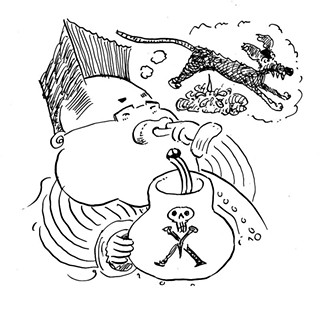 How do we know poisons are tasteless and odorless?

The recent dispatch of Kim Jong-nam by VX poisoning is all over the news at the moment, and reports invariably describe VX as odorless and tasteless. How would anybody know what a substance this toxic tastes or smells like, short of a heroic self-sacrifice by the assessor? Even inhaling this stuff seems foolhardy to me, let alone voluntarily giving it a lick. —Mike Caudwell

SURELY, Mike, you’ll recall the first principle of toxicology, distilled from writings of the 16th-century medical pioneer Paracelsus: “Sola dosis facit venenum,” or “The dose makes the poison.” Inhaled or ingested in great enough amounts, the idea being, any substance will take you down, including necessities of life like water and oxygen. Conversely, your body can process nearly anything in sufficiently small quantities and keep on kicking. Even an encounter with the notorious nerve agent VX can be survived, though I can't discourage this kind of field research strongly enough.

So people have been sampling poisonous substances since antiquity—sometimes in hope of medical benefit, sometimes as research before slipping it in someone’s drink. One reason we know that certain poisons are tasteless and odorless is that such secret killers are especially prized by anyone who wants to off a foe undetected.

The earliest poisons were herbal and generally distinct-tasting. Hemlock apparently tastes like parsnip, but more bitter and accompanied by a mousy smell. Aconite, also called monkshood and wolfsbane, was another poison known to the ancients; in testimony from an 1882 English murder trial, a medical examiner who’d tasted it reported that it created a burning and numbing sensation in the mouth—similar to the taste, he said, of an extract he’d made from the victim’s organs. Strychnine, used medicinally in Asia for centuries, wasn’t identified by Western science until the early 1800s; with its bitter taste and tendency (in high enough doses) to cause dramatically convulsive death, strychnine was an effective way to kill but an ineffective way to not get caught.

In 2006 the Hindustani Times reported that a goldsmith named M.P. Prasad, from the Indian city of Kochi, had in his dying moments left a suicide note providing valuable insight into the experience of ingesting cyanide: “It burns the tongue and tastes acrid.” But cyanide’s powerfully bitter flavor had long been documented, as it takes about a half a gram to fell a midsize victim. To some people, cyanide smells like burnt almond, but to others it’s odorless—there’s a genetic factor at work here.

The assassin’s best friend, of course, is a poison that kills slowly, and if you’re going to get someone to ingest their cause of death over time, it had better be undetectable. Arsenic is perhaps the most notorious tasteless and odorless chemical, involved in a third of all criminal poisoning cases in 19th-century England. A dose the size of a pea was enough to cause sudden death, though again the cagier poisoners doled it out more gradually. Meanwhile, though, other Victorians were ingesting arsenic on doctor’s orders—at low dosage it was prescribed for conditions ranging from asthma to rheumatism to diminished libido.

Some non-naturally-occurring poisons have made their way into scientific awareness innocently enough, and their taste and odor properties were determined through accidental exposure. Thallium sulfate, a highly toxic compound with no smell or taste, was discovered in 1861 as a byproduct of sulfuric acid production. Doctors used it for years to remove the hair of ringworm patients; later, in greater amounts, it was employed to poison rats and, in a number of high-profile 20th-century cases, people.

VX, by contrast, was a killer from day one. Originally developed as a pesticide circa 1952, it showed immediate promise as a top-flight chemical weapon: viscous enough to stick to whatever it touched; hyper-toxic enough even in minute amounts (say, ten milligrams) to induce paralysis and respiratory failure via skin contact. (Malaysian officials say Kim Jong-nam’s attackers managed to rub it on his face.)

Scary stuff, but there is such thing as a nonlethal dose, and plenty of people have been exposed to VX in military research and lived to get debriefed about it. According to medical historian Ulf Schmidt, in an unauthorized 1958 test two British Army scientists had 50-microgram droplets of VX applied to their forearms. Retired U.S. Army psychiatrist James Ketchum, who in the 1960s conducted chemical-warfare studies at the Edgewood Arsenal research facility in Maryland, claims that the chief medical officer there would regularly startle lecture audiences by dipping a finger into a beaker of VX, then calmly scrubbing it off as he explained that the poison needed a little more time than that to soak in.

But these guys were officers and scientists, and knew what they were dealing with; their rank-and-file test subjects signed up with no idea of what might happen to them. In a 2012 New Yorker article about Ketchum’s work at Edgewood, one former volunteer describes undergoing physical and mental agony after a tiny drop of VX was squirted on his arm and left there. So when the army tells you VX has no odor—as in its pamphlet Toxic Chemical Agent Safety Standards—that information was bought at a significant price.