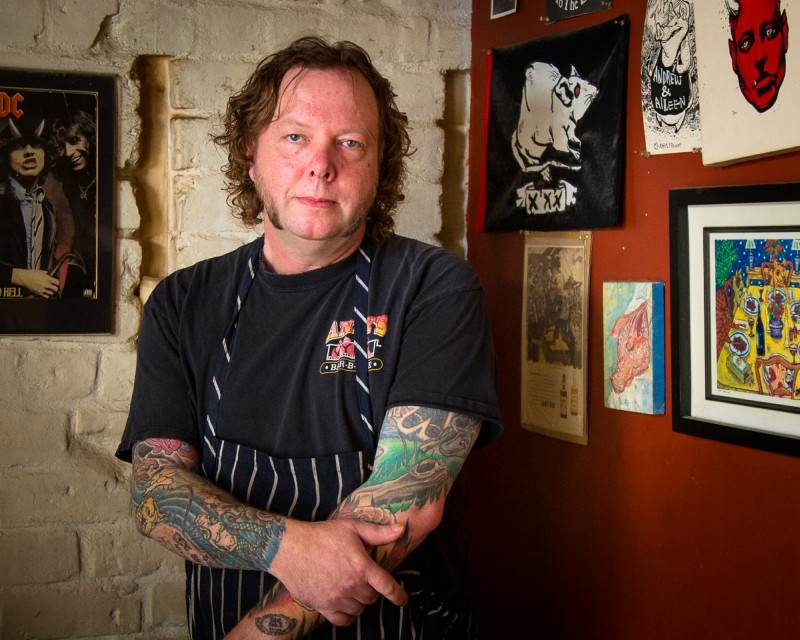 BEFORE he became an award-winning barbecue chef, Andrew Trice III wanted to be a pirate.

“When I was around eight, my dad had a reproduction of a flint lock pistol, and I’d filch that and go off to play,” recalls Trice, who crossed the high seas for real at 17, albeit not by ship.

His young punk travels in Europe whet his appetite for adventure and world cuisine, and he discovered the value of his own Southern food traditions in the culinary canon.

He returned stateside to study at the California Culinary Academy, though after paying his dues in fine dining, he decided it was time to get back to his roots.

For last decade, Trice has run Angel’s BBQ (voted Best of Savannah by Connect readers five times!) out of a tiny carriage house on Oglethorpe Lane with his wife, Aileen. “I just cook. She’s the smart one,” he says with a grin.

But even as he became renowned for his smoking skills, the yo-ho-ho still shivered in his timbers. When his nephew, Taylor, was four or five, Trice conceived the legend of Rum Rat Dawson, a “nefarious sociopath sailor who happens to be a really good cook.”

Naturally, the first thing his young nephew wanted to know was, “what do pirates eat?”

So Trice did some research, combing through historical records for references to the sea-faring staples of the day, including lobscouse, plum-duff, and of course, the requisite “tooth-shattering” biscuit known as hard tack.

He convinced Taylor he’d discovered an ancient folio in the false bottom of an 18th-century sea chest, a collection of stained pages containing Rum Rat’s recipes.

“I got out my old calligraphy set and burned the edges of parchment paper to make it look authentic and realistic. Kids know when they’re being tricked,” he says with a grin.

Trice’s pirate ruse worked so well that he continued to add more dishes and historical tidbits until he had a book. His nephew has the original wood-burned binder, but paperback versions of A Pirate’s Progress are now available for $15 to all scallywags at Angel’s and at the Book Lady.

Illustrated by his good mate and tattoo artist Jimmy Butcher, the slim tome offers handwritten instructions for plenty o’ pirate grub and pithy summaries of Trice’s research. Beginning with a mention in the first chapter of Robert Louis Stevenson’s Treasure Island, he found Savannah has ties to pirate history and to barbecue itself.

We also learn that whistling on board was forbidden as bad luck, but the ship’s cook was required to whistle while he was making plum duff—a pudding that was one of the rare sweets allotted at sea—to ensure that he was not eating the precious raisins. 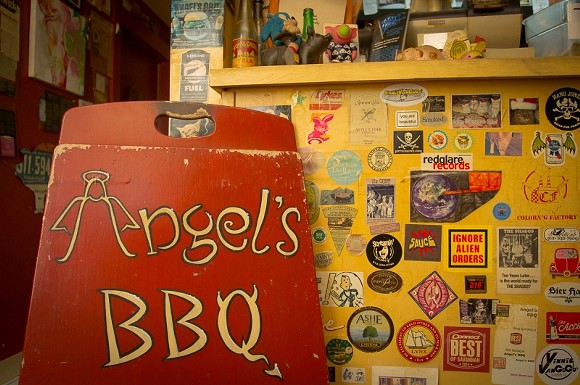 Explanations of a ship’s bell system and the origin of the Jolly Roger can be found between treatises on how to tenderize conch (aka “Hurricane Ham”) and prepare a bouillon-like concoction for “portable soup.” Rum was used liberally as a preservative, a flavoring, and well, by itself.

“Freshwater was scarce and often poisonous, so sailors drank rum to stay hydrated,” says Trice. “A lot of it.”

Some dishes, like Dog’s Body Pease Pudding—something like a solid split pea soup—may not appeal to modern palates but held important nutritional value to men who often went months without seeing a fresh vegetable.

“You’re dealing with a time period when there was no such thing as a balanced diet,” reminds the chef. “These sailors just needed to get enough fat and calories to be able to perform their tasks.”

But not all of Rum Rat’s culinary escapades ought to stay in an 18th-century galley: Home cooks can easily execute time-honored fare like Savannah Red Rice and Poisson Cru, a lime-and-coconut cured tuna entrée with a chili kick.

Trice also generously shares the recipes for his famous barbecue sauces and rubs, including his vinegar-based “Angel Drops” and the ghost chili-infused “Devil’s Dandruff.”

Wait, but doesn’t isn’t a pirate sworn to never reveal the secret to his treasure?

“Bah, anyone who keeps their barbecue sauces secret is just hiding the fact that it’s all quite simple,” growls Trice with a distinctive “arrgh”-like brogue .

This plunderer’s compendium seems a perfect gift for the cooking buccaneer in your life, especially when paired with a genuine “Savannah Roux Spoon,” also for sale near the Angel’s register. Hand-lathed by artisan Steve Cook of Coastal Wood Design, these flat-nosed utensils are perfect for carmelizing the main ingredient of Rum Rat’s “Mushrooms on Toast.”

Though he’s landlocked in the kitchen these days, the pirate’s way remains a romantic notion for Trice—and a kind of honorable one in the context of ship politics.

“They were breaking the caste systems and feudal systems. A man could be the son of a shoemaker and end up flush with wealth,” he says.

“On board the ship was the only true democracy that existed back then.”

But even though he cheekily titled A Pirate’s Progress after the 17th-century Christian allegory The Pilgrim’s Progress, Trice has no plans to chuck his barbecue joint for the marauding life.

“I enjoy history, but I also enjoy painless dentistry,” he laughs.

The golden rules of blackening 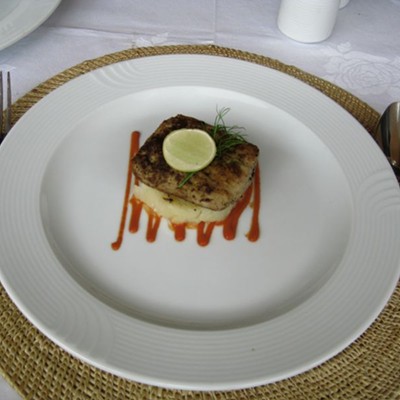 Talking the perfect turkey with a local expert