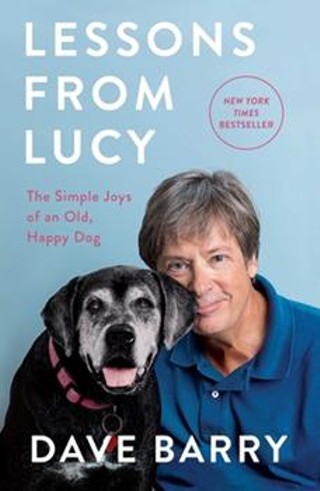 The paperback version of "Lessons From Lucy: The Simple Joys of an Old, Happy Dog" is available where books are sold on November 3. Visit SBF's website to register for the virtual discussion at www.savannahbookfestival.org

THE SAVANNAH BOOK FESTIVAL continues its virtual season with special guest author Dave Barry as he discusses his latest book and New York Times Bestseller "Lessons From Lucy: The Simple Joys of an Old, Happy Dog" on November 11 at 7 p.m.

The renowned humorist will sit down with Harrison Scott, author of memoirs “Congratulations,” “Who Are You Again?” and the book “The World’s Largest Man,” which won the Thurber Prize for American Humor. The discussion will be followed by an audience Q&A, where questions submitted by viewers online will be answered one-by-one.

The hardcover version of the novel came out in April 2019 to positive reviews. The book details Barry’s experience with his dog Lucy and his observation that indicates his elder dog is aging much more gracefully than he is.

Stephen King, in his review of the book, explained that readers who grew old with Dave will enjoy it and that even if you don’t love dogs, “These are very lively life lessons, even for the canine-impaired.”

Barry discussed with Connect his new book, how he got the idea for this book, and what he learned from his 12-year-old dog, Lucy, about enjoying his elder years.

“Over the years I’ve chronicled my getting older in various books,” said Barry. “But when I turned 70 a couple of years ago, I realized that Lucy turned 10, and if you go by the seven times rules, she’s turning 70.”

After realizing that he and his dog, Lucy, were at similar points in their lives, Barry decided to dig deep into how his dog deals with certain aspects of life compared to how he deals with them.

“Dogs have a certain wisdom about the way that they live their lives,” Barry said. “Whether it’s conscious or just purely instinctual they know how to be as happy as they can be, they know what makes them happy. They know how to be happy particularly with relationships, they are extremely good at that, which is obviously why they have survived as a species. Then I started thinking, ‘Well what things does Lucy do to make her happy, that I could do to make me happy?’”

Barry noticed that his dog loved everyone, especially on their walks together. He then tried to apply his dog’s willingness to meet new people to his own life, and tried to emulate her enthusiasm on the subject, despite a rather bleak view on meeting new people at the advanced age of 70.

“Lucy wants to meet everybody. She’s still very excited when she meets somebody and it’s always exciting for her to make a new friend,” Barry said. “Again it’s a simple thing to do, but it’s a harder thing to do as you get older unless you make a conscious effort.”

Barry also wanted to take a page out of Lucy’s book by always trying to have fun, which goes hand-in-hand with being more sociable. Barry noticed that Lucy, despite her age, still constantly looked for ways to have fun, so he tried to apply that attitude to his own life by joining clubs and participating in group gatherings, things people his age often neglect, he said.

“Senior fun is kind of like you’re standing on a golf course and grinning or you’re in a restaurant sitting there and grinning, but it’s a lot of grinning as opposed to actual enjoyment,” Barry said. “I thought about it and thought, ‘What is it that I used to do that was fun?’ It was always something stupid and uncalled for, and I kind of drifted away from that. The one example that I go into detail in is that I play in a rock band of authors – a bad rock band of authors. Good authors, bad band, but we have a lot of fun, kind of just stupid fun.”