ON HIGHWAY 80 on the way onto Tybee Island, nestled in a neighborhood before the bustle of the island, sits a small, unassuming building. Blink and you might miss it, set back from the road.

But inside is the Sea Wolf, the latest venture from the creative minds behind Lone Wolf Lounge.

Co-owners Thomas Worley and Andrew Ripley hosted a pop-up event in the building when it was still Fish Camp, before they had even launched Lone Wolf. Now that it’s a few years old, it made sense to expand. 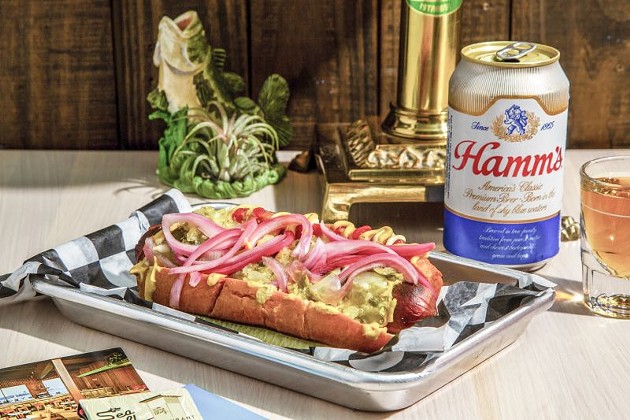 Sea Wolf’s concept is essentially the same: a neighborhood bar for North Tybee.

“The main idea is that you can come in and get a beer and a shot for five bucks, or you can get a really great cocktail that’s affordable,” says Ripley.

“That’s always our concept: we want to have the people come out. There’s a lot of people who go out in this town, but they’re not mega-wealthy; they’re just working class folks. They want a place they can afford in their neighborhood.”

That’s what has worked so well for Lone Wolf, and that success is poised to continue on the island. Sea Wolf is poised to be a bar that’s comfortable and familiar for locals, while also welcoming tourists.

Worley and Ripley, along with “janitor in charge” Ricardo Ochoa, didn’t make many changes to the Lone Wolf concept when creating Sea Wolf. You’ll find that the décor is a bit different between both places, but the vibe is essentially the same.

Sea Wolf maintains that Midwestern-chic décor, particularly with the wood paneled walls, but with a North Atlantic spin. Ochoa explains that many Tybee bars follow a beach bar style, but the team chose to stick with a port city vibe instead; Worley calls the look North Atlantic themed.

The name Sea Wolf is even a nod to a novel of the same name by Jack London, a coming-of-age tale about a man who is rescued by a sea captain.

Much of the décor, though, is built around one great find: a painting of a ship on stormy seas that Ripley and his girlfriend Caroline found at an antique store up in Chamblee.

“The aesthetic grew from the building and from that painting,” shares Ripley.

The result is a space that’s comfortable and accommodating to all styles of a night out, be it a quick beer after work or splitting a bottle of wine with friends. 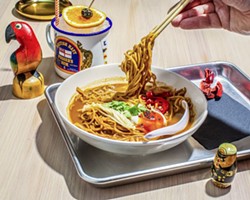 Worley, who cut his teeth working in bars on River Street, aims to blend a high-volume experience with a slower, finer pace.

“It’s very nice and presented well, but it’s not fancy,” he explains. “It’s supposed to be like, ‘Damn, this is really nice, but also, we’re not pretentious about it. We’re trying to be nice for you, but come in and have a car bomb or something.”

For Sea Wolf’s bar program, the beer selection has been reduced a bit due to a draft system, which allows them to rotate taps.

They’ve also increased the wine offerings as well, including sparkling wine, because Tybee is a big wine market.

Another reason for bulking up the wine selection is the opportunity for food pairings. Sea Wolf offers a full, rotating menu that’s designed to pair well with the drinks.

Ripley explains that they originally wanted to do food at Lone Wolf, but didn’t go through with it. Now, Sea Wolf has a full kitchen and a unique concept.

In developing their food program, Chef Nick Mueller, who’s been a successful catering chef for years, helped get them started and set them up with Chef Rob Mulvenna.

“Rob totally understood our concept,” says Ripley. “He’s from Chicago originally, he worked in a lot of kitchens in Wisconsin, and he and I are in the same headspace as far as food.”

At its core, Sea Wolf’s menu is all about oysters and dogs.

Right around $2.50 each, the oysters are a great value for what you get. The day I visited, both varieties of oysters were from Massachusetts, one sweet and one briny.

The dogs are an upscale twist to a regular hot dog; no stadium-style weenie here. The Classic Dog is available in both wagyu beef and a vegan option, and it comes with your choice of fixins. 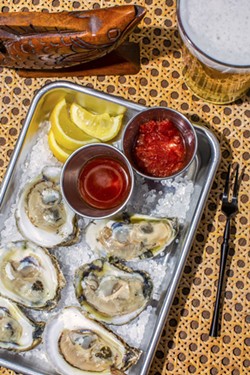 If you’re feeling adventurous, try the Slaw Dog with house-smoked pork butt and buttermilk coleslaw, or the Lamb Dog, a lamb sausage with garlic tzatziki.

“We like the idea that a vegan can order off the menu without having to spell out a whole paragraph of things that they have to take off,” explains Ripley.

Consider the Vegan Board, with olive tapenade and smoked eggplant, or the Shoyu Ramen, with enoki mushrooms and pickled fresno chiles.

Another exciting menu offering is the Smashed Fingerlings, a healthier alternative to French fries that are cooked on a flat-top, not deep-fried.

The menu will rotate on a regular basis to allow regulars to try new things.

“We want to have the menu be really tight but always changing,” says Ripley. “If you’re living out here and come here regularly, you’ll see different things all the time.

Worley concurs, adding that more exciting plans are on the horizon.

Now that Sea Wolf is finally open, the guys can breathe a little. This project has been in the works for a full year, and they signed the lease to the place in October. As they were getting up to speed, the pandemic hit.

It was a challenge to keep Lone Wolf open and continue the momentum of Sea Wolf at the same time.

“Renovations were happening at Lone Wolf with a professional team, and we were doing this thing here ourselves,” adds Ochoa. “There were some things to do; it was a long process.”

Sea Wolf has been open just a few short weeks, but it’s already garnering buzz both on and off the mainland.

“I heard people remarking last week, ‘I don’t feel like I’m on Tybee,’” shares Worley. “And we’re like, ‘Good. Just escape.’ I think it’s unexpected. I think a lot of people were expecting this to be a certain way, and we’re trying to go the other way.”