Free and open to the public.

For those unfamiliar with Huntertones, the phrase "high energy" is a good place to start. Led by saxophonist Dan White and trumpeter Jon Lampley, the band formed in Ohio before relocating to Brooklyn and ultimately garnering a reputation for their celebratory live shows and infectious songs. The musicians are all in-demand, high-caliber artists individually, but there’s a chemistry that happens as a unit that has won over audiences nationwide since they formed in 2010.

The band is set to play Savannah Jazz Festival on Fri., Sep. 27, and we caught up with Lampley beforehand. 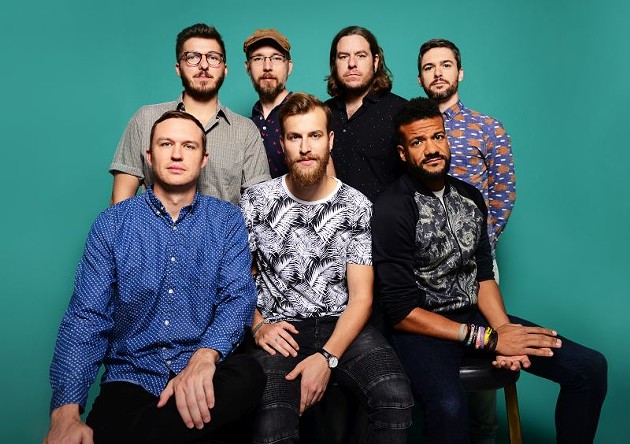 You guys started in college, right? What led you to landing in Brooklyn and doing what you’re doing stylistically?

Yeah, it started around 2010. We were all students at Ohio State University—our rhythm section were there a little bit before we were, and then the rest of us were there at the same time. We were studying jazz and were in ensembles, and we all kind of had an interest in writing music and playing outside of the school setting. Initially, Dan had a small group that was kind of quartet stuff, a more straight ahead vibe. Me and [trombonist] Chris Ott started playing with them and it began as the Dan White Sextet before morphing into what’s now known as Huntertones.

We were writing music, arranging and playing, and before we could get gigs at venues we would throw parties at this apartment that two or three of us would live at. We’d invite a bunch of people over and play music in the basement. So the first year, we threw these parties with probably 15-20 people hanging out. The band developed more fans over the years around Columbus, and by our senior year there were 150-200 people showing up and jamming into our music.

The house that we would throw the parties at was on a street called Hunter Avenue. When we moved to New York, we wanted a name that was more representative of where we were at musically. Also, when you hear the term “sextet,” you think, “It sounds like a jazz band.” Not that we’re not into that tradition, but what we’re doing is very much not jazz specific. So we ended up changing the band to Huntertones.

It seems like sometimes all it takes to change people’s perception of a band is a name change. Do you feel like that’s what happened with Huntertones?

Yeah, 100 percent. When we first moved to New York, we changed the band name within months. When we first moved, we were desperate for opportunities to play. When you look at the marquee at Rockwood Music Hall, you see Dan White Sextet and you think it’s a certain thing. So if you’re not into straight ahead, you’ll skip over it. But when you see a band name like Huntertones, you think, “That sounds like it could be cool.” Even to new fans, people are more open to seeing a band called Huntertones.

When we shifted the band name, it was also a shift in what we were doing and the type of show we wanted to put on. It became less about playing the most shredding solo and more about how we connected with people. There’s a lot more music on stage, and it kind of shifted to more high-energy rock and hip hop influence, so more different types of people started showing up.

It is a very genre-bending thing, and we do live in sort of a post-genre world. It’s hard to ask about genre or style because you don’t want to box an artist in, but what would the elevator pitch be for this band if you had to give one?

I always say it’s high-energy, feel good music. Sometimes I’ll say “high-energy, feel good instrumental music,” but at times we’re collaborating with singers and songwriters. The key is this high-energy, horn driven sound. Whether we’re playing at a notable jazz club like Blue Note Tokyo or opening for a pop band at Webster Hall, you’re going to feel this jolt of energy from what’s happening on stage.

We’re very animated on stage—there’s always movement and connection with each other. What I see in the audience is that it causes people to be invested. Whether you’re a jazz fan, a soul fan, a rock fan, a hip hop fan—there’s something in it for everybody. Practically every time we play a show, there’s someone in the audience who says, “Yeah, man, I’m not really into jazz but that was awesome.” Like you said, genre is a word that is disappearing in all facets of music. That’s the kind of thing that gets people in the door. And then when they’re there, it’s like, “Wow, this is something totally different than what I would’ve expected.” That’s what we’re going for.

Is there a city that you’ve played in where you’re maybe unsure of how the music will go over, and then you’ve been pleasantly surprised?

We’ve had a couple of experiences like that. One that I’m remembering more recently—we played a concert series last year in Lincoln, Nebraska. It takes place in this big open park. Literally, there are 3,000 people who come to hear bands that a lot of times they’ve never even heard of. It’s all ages—older people, younger people, college students, families, and kids. Everybody’s super hyped. After the show, we sold more merchandise than we’ve ever had at a show. You’re out in the middle of the country, not really expecting that kind of investment. I really think that there are more and more people now who are invested in music that’s less conventional.