LAST TIME Savannah saw Nina Diaz onstage, she was fronting Girl in a Coma, the Joan Jett-nurtured band she joined when she was just 13 years old. With punky attitude and indie prowess, Diaz established herself as a magnetic powerhouse of a frontwoman and a killer songwriter to boot.

Being hurled into the spotlight required the San Antonio native to grow up quickly. While Girl in a Coma was opening for the likes of Morrissey and Tegan and Sara, taking home multiple Independent Music Awards, and touring constantly, young Diaz was struggling with addiction. Drinking socially at age 13 evolved into using cocaine at age 16. By 24, she was a functioning meth addict.

When a friend told Diaz’s sister and bandmate about her drug use, her family was shocked, and Diaz began moving toward sobriety. The real turning point occurred on January 9, 2013, the anniversary of Diaz’s grandmother’s death. Diaz was writing new material—and using while doing so—when she felt a “crazy energy.” Later, playing back the demo, she heard someone whispering her lyrics before she even sang them. Convinced her grandmother was reaching out to her in a desperate time, Diaz fully committed to sobriety two months later.

On October 28, Diaz will release her first solo effort, The Beat is Dead. An album packed with killer ‘80s-tinged dance anthems with industrial grit, tough synths, and lyrics that follow Diaz’s journey to sobriety, The Beat is Dead boasts a contagious energy that Diaz and her band bring to life onstage. 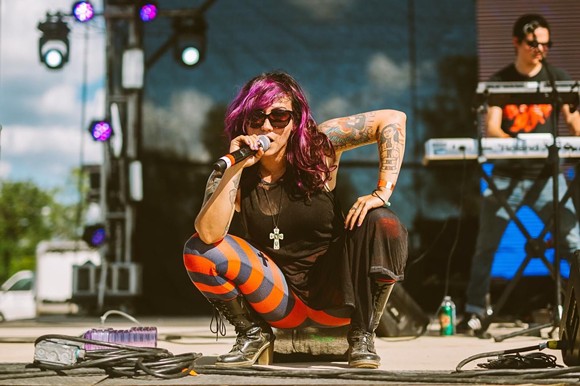 We talked to Diaz about growing up in the music industry, getting clean, and channeling INXS and Queen to make a stunner of a debut.

What inspired a solo album? Was this material you tried with Girl in a Coma, or new songs altogether?

A lot of things really did inspire it. Girl in a Coma has been together for 15 years now! And we’re still together, just taking a break from each other. I was really at a crossroads in my addiction. I was a drug addict and alcoholic and battled with that since I was 13. I started hanging out with an older crowd, and I’m a very emotional and passionate person. When I do something, I do it, whether it’s good, and when it’s bad, I throw myself all in it, too.

I was at a point musically, as well, where me and the girls did four albums, including a covers album. That takes you somewhere, as well, rearranging others’ songs. At a point, I felt kind of stiff. I felt like I wanted to try something different. I was starting to work on new material with keys and drum samples—not necessarily what Girl in a Coma was or what we wanted to be—but I did try to jam out “Trick Candle” with them, but it turned into a different type of song, but I wasn’t happy with it. It wasn’t what I saw for it.

So, I was still in my addiction, and I was at this point where I hit the bottom. Something that would help with my sobriety would be to be open and stop making myself like a victim. I needed a break, and I decided to take this break, do a solo album, get something out.

In the beginning of the solo stuff, I was still using a bit. Like I said, I’ve been using off and on since I was 13, and I’ve been writing, and some of those songs were under the influence. Once I got sober, I had a clear mind. Some artists unfortunately need something to write, and others can go both ways—some prefer nothing at all. Now, I prefer nothing at all and to be clear as possible. I’m already a pretty crazy person—it’s one mood or another. I’m a Pisces, the definition of a Pisces, for sure! When I was starting to write the album, I was going to do a couple of songs and do a five-song EP, then I kept rolling with it. I was messing around with some stuff, and I free flowed things and lyrics and worked on things in Garage Band, checked out everything, and when I went to the studio, that’s where I noticed my mentality was. I’m used to being in the studio with the girls, and that was the turning point—‘I’m really alone now.’

I was working with amazing musicians in the studio. I got my anxiety attacks, I felt my different emotions, but they helped me go through the motions of, ‘I can do this.’ Working with my hometown musicians, forming my band—that was a totally different anxiety. One lesson after the other. It is definitely different writing and working in this mindset as opposed to the mindset of Girl in a Coma. It’s given me strength and made me ready for something new.

What was it like acting as a producer on the album? Did you work on the production end with Girl in a Coma?

With Girl in a Coma, I write the main songs...I’m kind of like the musical director. So when we comes to the studio, we all produce together. It’s always been a group thing. Usually in the end, I’m there when it comes to doing overdubs. It’s usually me alone in the studio with the producer. I’m used to taking control, in a way, but I can be stubborn. If I have something I want to hear, I want to hear it, what I feel it can be. If it doesn’t work out, we’ll try something else. I’ve worked with different types of people and I used to be very, ‘My way! Now!’ Now I feel like, it’s like, ‘Let’s try this out.’

You mention you wrote a lot of these songs while you were still using. What was it like to revisit those songs and record them while sober? Did they change?

That was the beauty of being in the studio, as well: that’s what I was fearful of working with a producer who wants to mold me into something. I don’t want to be a pop star. I want to be a musician. I like the entertainment aspect, as well, and I want people to keep me in the loop. But I don’t want to be told what to do or how to look. I made sure it was like that in the studio through the people I had in-studio. And it made the transformation from using to sober much smoother. This is the best work I’ve ever done. I love Girl in a Coma albums, but this is my baby.

Did you approach this album with particular influences in mind?

I know I’m influenced by so many different types of music, from grunge to ‘80s to Billie Holiday to Bjork to Jeff Buckley. In my solo journey, I was listening to a lot of INXS and Queen. I definitely had Michael Hutchence in mind to gather some strength. People say when they hear the album it has a dark tone to it. That came out naturally. When you’re in an addiction, you’re dark. In recovery, you’re always in different phases. This album is the perfect story of what I went through, from using to ‘I’m going to detox’ to ‘I have to apologize for everything and make amends.’ I know who I am now.

Of course, my new wave influence—‘80s keys, everything like that—I knew as we were working on each song. I listened to ‘Love My Way’ by Psychedelic Furs...here’s been a couple songs like that I’ve listened to to capture the same kind of vibe. I figured that out, too—I have the same birthday as Albert Einstein. Even though I’m horrible in math, in a way, a song is like an equation: verse, chorus, bridge. I found I would study some songs I like, and I would write out the formula and replicate it in my natural way.

You’ve been in the music industry for basically your entire adolescence and adult life. Have you always envisioned a life as a musician?

I felt like this, and I still do: this is what I’m supposed to do. I know everybody thinks that in the music industry, or acting—we really have to put ourselves out here. There’s so many people trying to be the next something, to be the one that changes lives. But I honestly feel like—it’s like when you get a nice pair of jeans, and it just feels right. That’s what it feels like with this. I’ve always imagined myself performing, ever since I was little. I listened to the radio to fall asleep. I’d act out being onstage. Overcoming my shyness, all the different things I’ve been through, have been for a purpose, no matter how high, I will never drop down like I did when I was using drugs. That shows me I can do anything that comes my way. If this is what I’m supposed to do, then I’m going to do it right and real.