'I love the music more' 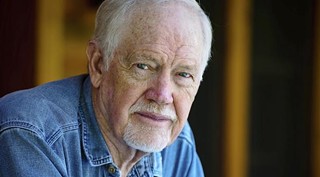 Ronny Cox's first film role was as one of the ill-fated adventurers in John Boorman's "Deliverance."

Ronny Cox gets approached all the time, in airports, in restaurants and on the street. Inevitably, strangers recognize him – they’re sure they know him from somewhere. Was it Des Moines? Akron? Atlanta?

That’s because Ronny Cox has one of those likeable everyman faces. He looks, well ... familiar.

All those people need to do is turn on their TV and wait. Sooner or later, something with Ronny Cox – one of America’s hardest–working character actors – will turn up. There he is, playing guitar alongside the hillbilly kid’s banjo in Deliverance, or bossing Eddie Murphy around in Beverly Hills Cop, or scheming for world domination in RoboCop or Total Recall.

On TV, he starred as evil Senator Kinsey for the entire run of Stargate SG1, and memorably took over for Jean–Luc Picard in a legendary two–part episode of Star Trek: The Next Generation called Chain of Command.

Cox also happens to be an acoustic guitarist and singer/songwriter of considerable renown, with seven CDs of sweet, smple folk music to his credit.

This week, he performs twice in the Savannah area, with his longtime friend and collaborator Jack Williams.

The following is edited down from a much longer interview with Cox – we talked at length about our favorite Texas songwriters (his: Mickey Newbury; mine: Guy Clark) and the recent passing of his good friend, California music legend Kenny Edwards.

How do things work onstage with you and Jack?

Ronny Cox: Jack does the first set, and then he joins me for the second set. We found that that works best for us. Because both of us are storytellers, and both of us feel like we need more of a run at things. If I do say so, the show really works out well. As well as being the greatest singer/songwriter that I know, Jack is absolutely the best accompanist in the world. The thing about Jack, when he’s playing with you, is that he has absolutely no ego about his own music. Every fiber of his being is to make your music as good as it can be.

Live music is so different from film work, isn’t it? Because you get an immediate response from people.

Ronny Cox: Absolutely. I love acting, don’t get me wrong. I love it and I’m good at it. To tell you the truth, I love the music more. With acting, no matter if it’s movies, television, plays, you name it, there is and must be that imaginary fourth wall between you and the audience. You can’t step through the camera. You can’t step off the stage.

With music shows – especially the kind that Jack and I do, where we tell stories  as well – there’s a possibility of a profound one–on–one sharing that takes place. And it’s that sharing that is the opiate. It’s nirvana, in a way.

You record and perform lots of songs from other writers, even though you’re a songwriter yourself. Why?

Ronny Cox: As a matter of philosophy, I do more than half of my show of other people’s songs. And I can do a whole night of my songs, and I think they’re really great. But they’re all sort of coming from within me, you know? And I like a show that has an arc, one that I can paint these different colors, and those different colors.

I also think it’s our job as folk artists, or acoustic musicians. The way it’s passed on is, if I know a wonderful songwriter from North Carolina named Jonathan Byrd, and you don’t, it’s my job to say “Listen. You need to know this guy.”

If you don’t know John William Davis’ songs, then you’ve got a big hole ... and he’s a Georgia boy! Do yourself a favor.

People will recognize your face, but not necessarily your name. Do you consider being a “character actor” a badge of honor?

Ronny Cox: I do, because I’m interested only in playing character. As you know, there’s basically two kinds of actors, guys who play persona, and guys who play character work. I have a very rich, wonderful, warm private life which will remain private, and that’s one of the reasons why I love playing the bad guys so much. Because we try to be good guys every day of our lives, you know? That’s pretty boring. So the fun for me is getting to play somebody that’s out there.

People still ask you about your role in that two–part episode of Star Trek: The Next Generation, don’t they?

Ronny Cox: Oh yes. I’ve got some relatives who think it’s the only thing of any worth I’ve ever done!

And I did nine seasons as Senator Kinsey on Stargate. There’s a huge, huge synergy between folk music and sci–fi people. I’m the most hated man in the Stargate lexicon. But I went to a Stargate convention in England, and I did a concert for them. I thought perhaps they’d boo me off the stage, but I’ve never played to such a warm, receptive audience.

The kind of show I do is so foreign to the kind of show that they enjoy. Acoustic music? As opposed to the sci–fi stuff? It almost didn’t compute. But it was really one of the most amazing nights I’ve ever seen.