IT'S BEEN SIX YEARS since the hot summer night in 2008 when Jason Statts and his friend and bandmate David Williams were shot in an armed robbery on 48th Street. They were unloading their gear right after a gig at the old Live Wire.

One bullet from the robber’s pistol entered Statts’ neck, immediately paralyzing him from the chest down. The same bullet kept going and hit Williams in the throat, injuring a vocal cord.

A lot has changed—and not changed— in those six years.

The shooter, Desmond Hunter, was convicted of the crime and is serving a life term plus 80 years.

And in a horrible déjà vu, this year’s hot summer brought yet another barrage of shootings all over Savannah. 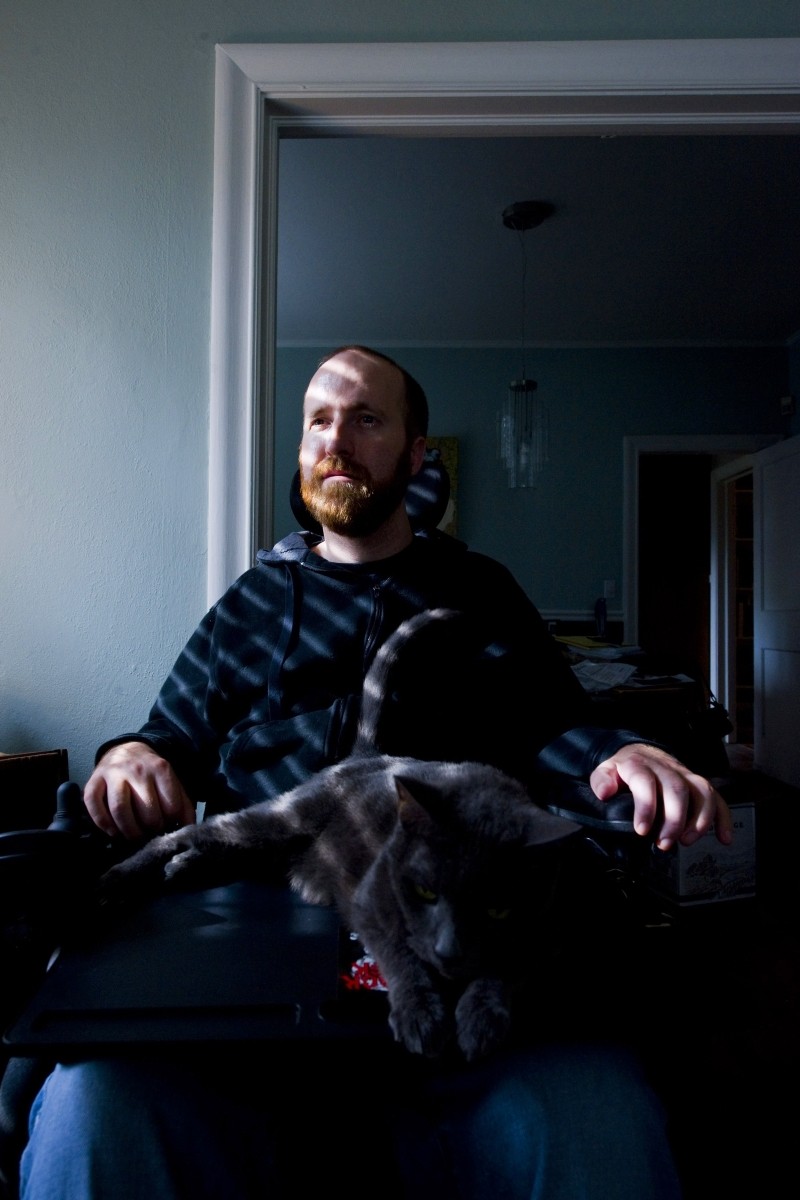 Jason Statts in his home. The local musician was shot in an armed robbery attempt in 2008. He remains paralyzed from the chest down. Photo by Geoff L. Johnson

One thing that’s remained constant, however, is Statts Fest, which since its inception as an ad hoc benefit just two months after the shooting has become one of Savannah’s most anticipated musical events.

The fifth edition of the fully-realized Statts Fest happens all day Saturday at the Jinx, with an impressive lineup including local favorites CUSSES and nationally renowned local metal band Black Tusk.

The festival not only brings together a diverse range of local and regional acts, it also celebrates Statts’s own devotion to making music—which he continues to do, in his own way.

“I have no movement in my legs or basically below my chest. I’m able to move my right and left arms, but no fingers yet,” Statts explains from his bed.

The game-changing technology for Statts is something now pretty commonplace: the iPad. He uses that to compose the album art he’s known for, as well as getting back into writing and playing music.

“The iPad has been my thing, my tool for like two years,” he says. “I guess you could say I definitely got hurt in the right technological time.”

Statts is mostly limited to using the back of his pinkie to interface with the iPad, but he says “I just figured out I can use a little stylus I’ve had for awhile. I tried it the other day and it actually works pretty well. The drawing’s getting there with practice. I’m glad I can still do it.”

His music these days is “mostly just sound. I like sounds and noises and soundtrack kinds of things. I don’t do it as often as I wish I could. I’m trying to get back into making music in a style I’m happy with given what I’ve got to work with.”

Statts doesn’t get out of his Parkside house much—maybe three times a year to non-medically related events. For the most part he’s bedridden, and attended to by a small but trusted group of caregivers.

While remaining immobile in a bed poses its own problems, long stints out of bed in the wheelchair are not only fatiguing, but due to the nature of his spinal injury potentially dangerous as well.

“Since I’ve been bedridden so long it’s a process of building back time in the chair, a few hours at a time. Without jumping into it, because I can cause more damage that way,” he says. “I almost get there and something will happen and I’m back in the bed for awhile. It can happen real fast and that’s it. And then it’s a lot of recovery time.”

Statts says there’s never a time when he’s not in pain.

“People think when you’re paralyzed you don’t feel anything, but that’s just not the case. They don’t know I still have pain all the time, 24/7,” he says. “You have nerve pain that’s pretty terrible. I get impulses shot through, but they just don’t make it. It’s a really weird feeling.”

Statts is on a regular regimen of prescribed painkillers, “but I try to keep the dose pretty low,” he says.

“I’m trying not to increase the medicine because I don’t want to be a zombie. So I choose the pain over being a zombie. Which is sometimes kind of a stupid decision,” he laughs.

Lately, Statts has been battling a series of health issues directly related to the extent of his bed confinement.

“I was just in the hospital for about a week, with a kidney stone, bladder stone, bladder infection, and UTI all at the same time. Usually it’s stuff like that that gets me. It’s all a normal part of dealing with a spinal injury,” he says. 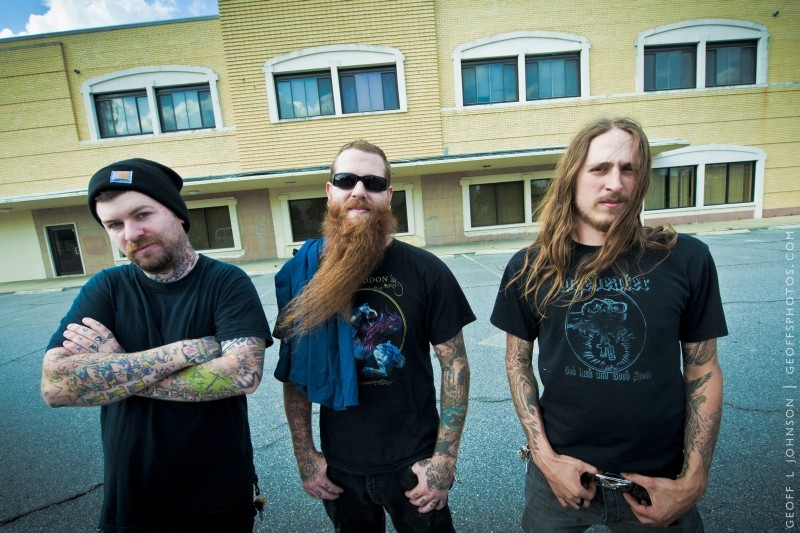 Savannah-born metal band Black Tusk performs at this year's Statts Fest at the Jinx; their sound is reminiscent of Statts's own style. Photo by Geoff L. Johnson

Still, Statts makes a point of attending each edition of Statts Fest for as long as he’s physically able.

“Hopefully I’ll be able to go for most of it this year. I usually try, but sometimes it’s to my detriment if I stay out too long. I’m still trying to figure out that sweet spot.”

Statts jokes that he’s usually the last to know what bands are playing at the festival named for him.

“I usually get surprised at the end. They tell me who’s going to be there and where it’s going to be. I have no clue most of the time,” he smiles.

“We keep Jason on a need-to-know basis,” laughs John Collenberger.

Since Williams’s departure to ATL, Collenberger—drummer in Conquer/Devour, also playing at the Fest —has been taking a lead role in organizing the benefit.

“We usually start putting it together probably about six months before the event,” Collenberger says.

“Last year’s was so big we sort of wanted to scale back a little this year. We got a lot of bigger bands this year, but it’s still mostly a local thing. Most of the acts haven’t performed at any of the past benefits.”

Angel Bond is vocalist of CUSSES, one of the bands that hasn’t yet performed at a Statts Fest.

“We are super excited and honored to be a part of Statts Fest this year. We love seeing Jason’s friends and this community come together for a great guy, showing us how caring the people in this city are time and time again,” Bond messages us from the road.

“This will be our first time playing it, AND we get to play earlier than most of you are used to seeing us, game on!”

In a way, Statts Fest has played its own role in helping the once-disparate Savannah music scene coalesce in ways not always apparent in years past.

“The scene has always been good, but bands could have done more to support one another in the past. Seems like there was a cliquey, almost kind of a high school thing going on,” recalls Statts.

“I think everybody in the scene should support everyone no matter the sound. That’s why they try to pick such diverse bands to be in this thing. I think that’s cool. It brings people out who might never really talk to each other, so they can have a better dialogue.”

As Savannah’s arts and culture scene progresses, however, one thing doesn’t seem to get much better: Out-of-control gun violence continues to plague the city.

“They’re a bunch of little cowards with guns. And cowards and guns are a bad mixture,” Statts says by way of explanation of the latest summer of violence.

“I just think they’re cowards who don’t know what else to do. It’s sad in a way. And it all makes me feel for the victims, because I know what can happen in just one second,” he says.

Statts remains puzzled at the apparent need for some to inflict pain and damage on others.

“If you wave a gun at someone, they’re probably going to do whatever you want them to do. You don’t really have to shoot them to make your point,” he muses.

“I don’t know if there’s a courtesy involved with ripping someone off [laughs], but there should be at least a little bit of nicety before you blow someone away.”

As for Statts’ assailant, “I don’t really think about him or the shooting for long. I know he wasted his life. But that was his decision. I’m at peace with myself. Whatever happens now happens.”

But Statts doesn’t go so far as to say he always feels fortunate to have survived.

“Yeah, sometimes I do wish I’d just gone away that night. But most of the time it’s good. It could be worse, much worse.”