For box prices in your area and more information on the farm-to-home delivery company, visit front door produce.com or Instagram

DELIVERY groceries and meal kits have been the way of the future for several years. The quick and easy service became popular even before our world faced its current pandemic, but because of the existing state of affairs, no-contact orders and deliveries have really taken flight.

Alternatively, there is often no better way to get seasonal and fresh food than at the farmers’ market. By purchasing straight from the farmer, consumers get the best quality food that is sustainable.

Unfortunately, visiting a busy farmer’s market is not always ideal if you are trying to avoid crowds. Front Door Produce is a Savannah solution that combines the best of both worlds. 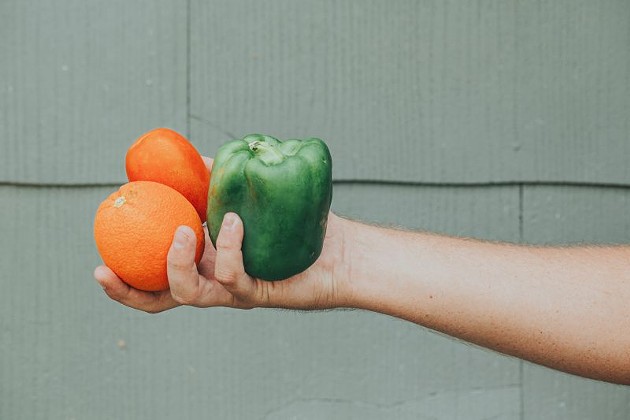 The new service delivers a large box of farm-fresh produce to your door, and is available in Savannah as well as some neighboring counties. The price is half of what you would pay in store, which makes the service even more desirable.

Creators Brad Mathis, whose family owns Southern Valley Fruit and Vegetable, and local Brad Hunter teamed up to create Front Door Produce. The concept is simple: fresh, straight from the farm seasonal produce delivered to homes all around Savannah  (and a little beyond). As Front Door’s motto goes: “If it was any fresher, it would still be in the field.”

Instead of going to a big-box store and selecting produce that has gone from the farm to a middleman broker to a storage facility and finally to the store, Savannah locals can have the produce delivered directly from the farm to their front door. By cutting out both the middleman and long turnaround times, you get better quality food at a lower price.

According to Hunter the process is simple: “If [Southern Valley] pick and pack it on Wednesday, I can get it on Thursday. People get[the Front Door Produce box] on Friday or Saturday. There are a few that I deliver on Thursday because I want good customer service. It is cheaper and you are buying six to seven days of shelf-life, because the way it normally goes from the farm to the distribution center for a couple of days then back to the store for a couple of days, and then onto the store’s floor for a couple of days, you are looking at six to eight days before buyers get the produce.” 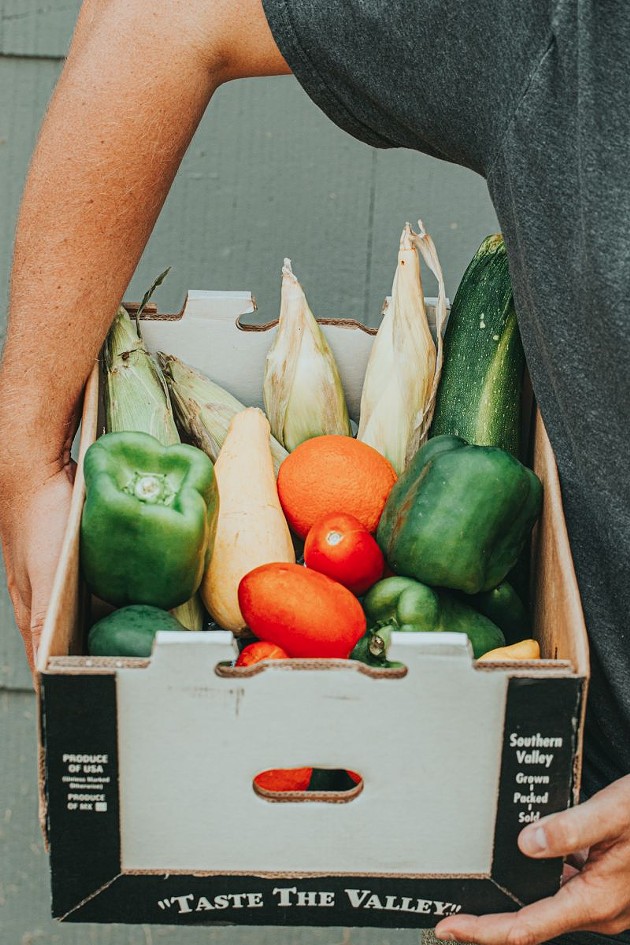 Smiling, Hunter explained to me, “There is a good feeling when you give a box of vegetables from the farm, and you make everybody smile.” He partnered up with Mathis with the idea that Front Door Produce would act as the milkman used to act and maybe bring back simpler times. He elaborated, “I feel like no one is going to out customer service me. No one is going to give you fresher produce than me.So that is the reason we are doing it.”

If you live within twelve miles of the pick-up site at 6730 Waters Avenue (where Howling Hound used to be), it costs only $17 for delivery to your home. Hunter is even willing to smudge the twelve mile rule a bit because customer service is so important to Front Door Produce: “I hardly ever turn anybody down. Even if it is fourteen or fifteen miles, I take the box. And if it is too far, I sometimes give them the option to meet me halfway.”

Other cities are not as lucky as Savannah in price, but the price is still lower than competing stores. “My box would be between $25-$35 every week at the grocery stores, and I can get rid of one for $70 delivered.You can basically buy two boxes from me for the price of one that you have to go get, and people have picked and touched the produce,” Hunter explained.

Each Front Door Produce box contains approximately 16 to 20 pounds of mixed, super-fresh produce. Crops vary from items such as tomatoes, squash, onions, okra, bell peppers, corn, green beans, cucumbers, jalapenos, cabbage, poblano peppers, and even citrus. Hunter told me Front Door likes to throw in an occasional orange or something unique to surprise eaters and make each box even more colorful than it usually is. Every Monday morning Front Door is given a choice of the available Southern Valley fruits and vegetables, then the delivery company selects what to put in each box. Availability is based upon season and locality.

If you feel like escaping home quarantine for a bit, customers can schedule a pickup and get their box in person on Fridays from 10 a.m. to noon.

Since starting Front Door Produce only a few short months ago, Hunter and Mathis have been able to grow their business successfully. Currently they are averaging 250 boxes per week and still growing, so I suggest getting in line while you can.

Due to the continual growth, Savannahians can even find produce from the Front Door-Southern Valley partnership in several restaurants around the city.