In change of course, City will allow signs at Pence visit

REPORTEDLY just moments after a lawsuit was filed in federal court to overturn rules against displaying signs in the 'Enhanced Security Zone' for Saturday's visit by Vice President Mike Pence to the St. Patrick's Day Parade, the City of Savannah changed course and has opted to allow citizens to display signs within the Zone.

"There was a misunderstanding between the City and the Secret Service," says City spokesperson Michelle Gavin. "The City of Savannah will not infringe on anyone's First Amendment rights."

Signs still cannot be on sticks or posts or anything that could be used as a weapon, however.

"It's a great day for the First Amendment," said lead local counsel Will Claiborne, whose firm The Claiborne Firm partnered with the American Civil Liberties Union (ACLU) of Georgia to file the lawsuit in federal court Friday morning.

"The second we filed the lawsuit, the City changed their mind and chose not to stand in the way of the citizen's rights to free expression," Claiborne said. 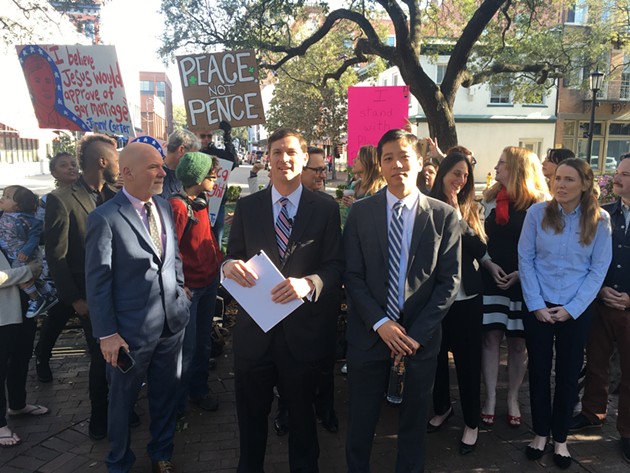 The press conference Friday morning; Will Claiborne is at center, Sean Young on his left
At the press conference, ACLU of Georgia Legal Director Sean Young said, "The government had the audacity to forbid people from carrying handheld signs at a parade, signs no bigger than a posterboard. That's why we're going to court today. For the government to protect the feelings of an elected official is anathema to the First Amendment."

Gavin cited miscommunication in the protocol for the Vice Presidential visit, which involves far more extensive security measures than seen at any previous edition of the Savannah St. Patrick's Day Parade.

The City clarifies that signs on paper, fabric, or poster board are allowed in the enhanced security zone on parade day. Signs that are made on a hard material or on sticks are not allowed. Signs cannot exceed 20 feet by 3 feet by a quarter inch thick.