In the Heights: SCAD groups take on Lin-Manuel Miranda piece

Admission is $1. Production donations can be made on the show's GoFundMe page.

GET READY to clap your hands, dance in your seat, and shout "Wepa!"

New York’s Washington Heights and its colorful infusion of Hispanic-American traditions will come alive at the Savannah College of Art and Design’s Arnold Hall Theater Friday and Saturday for the Savannah premiere of Lin-Manuel Miranda’s Tony-Award-winning musical, In the Heights. 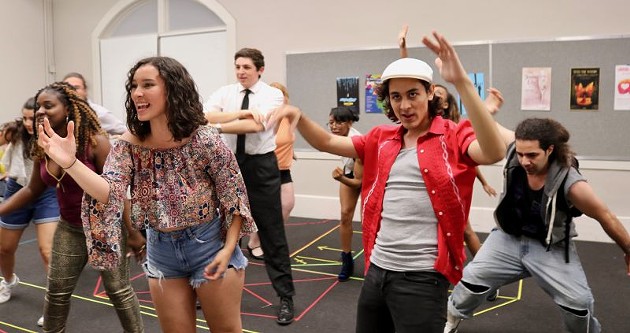 According to Vidales, who also stars in the show as Daniela, the owner of the Washington Heights neighborhood salon, Alpha Psi Omega and the Multicultural Alliance Theatre emphasize diversity while providing students of all majors the opportunity to perform.

“We also strive to help others through the theater that we do. When we got the idea of doing In the Heights, we thought, ‘That’s perfect.’ With what’s happening with Puerto Rico right now, [the show] just brings a different story onstage that definitely has not been told in Savannah.”

The show marks the first time Miranda’s work has ever been performed at SCAD as well as in Savannah, something Price believes is beneficial to both student and local audiences. With the help of the two headlining student organizations, the show is entirely self-produced.

Calling back to Vidales’s comment about using the theatre to help others, Price said they also plan to fundraise for Broadway Cares/Equity Fights AIDS, a renowned philanthropic organization in the theatre community, and Somos Una Voz, an alliance of artists working together to rush food, shelter, medicine, power and communications to those in need from the effects of recent natural disasters in Puerto Rico.

With music and lyrics by Miranda and a book by Quiara Alegría Hudes, the show debuted at the Richard Rodgers Theatre in March of 2008 to critical acclaim and was nominated for thirteen Tony Awards (it won four including for Best Musical and Best Original Score).

The story, conceived by Miranda in 1999 when he was a sophomore at Wesleyan University, centers on the diverse melting pot of Hispanic-Americans in Washington Heights. At its core, In the Heights tells the story of family, tradition, and how both can affect the trajectory of multiple lives.

First-year performing arts graduate student Jackelyn Segui plays the role of Nina Rosario, a first-generation college student referred to multiple times as the “one who made it out” of the Barrio.

However, Nina enters the stage uneasy about telling her parents she dropped out of Stanford University. Segui, who is Puerto Rican, is no stranger to the script.

She actually performed in the show in Puerto Rico, an experience she recalls as “very special.”

“This was a great opportunity for me to be able to do it again,” Segui says. “Doing it with a full cast of Puerto Ricans was very different from what we are going to do here. Bringing all that love for your nation and for your island... I think it is something that is needed in our society, so I’m very happy to be a part of it.”

First-year advertising student Juan Pablo Delgado plays the show’s lead, Usnavi de la Vega, the show’s narrator and the role originated on Broadway by Miranda. Like Segui, Delgado is also from Puerto Rico and starred in the show prior to this production.

In fact, In the Heights has been a huge part of his life since his sister saw the original cast perform and brought the soundtrack home. Immediately, Delgado was hooked, and he listened to the album nonstop.

“Usnavi had always been my dream role, and I think my favorite part of playing the role is just his energy,” Delgado says. “He’s a character that has so much to give and is connected to everyone in the community. He is almost like the beating heart of Washington Heights.”

With just six weeks to put together the show, Price and Vidales said their rehearsal schedule has been understandably intense.

“On that note, with it being student-run, we could not do this alone,” Price says.

“Yes, we’re co-directing,” she says, motioning to Vidales, “but the show — from the ensemble to the understudies to the supporting roles to the leads and our choreographers and our sound designer — is truly a family effort. We’re so grateful to everyone who’s involved in the process. We have learned so much about each other, about culture and diversity, and we’ve really grown together.”