Free for Telfair members, $8 for non-members

All events at Jepson Center for the Arts, 207 W. York St.

Is Technology Useful? Panel and Q&A

What if time wasn’t linear? What if words didn’t make sense? What if time and language are constructs that aren’t as universal as we thought?

That’s the gist of the work of conceptual artist Alicia Eggert, whose piece “Now” will be on display at the PULSE Art + Technology Festival.

Since her Pentecostal upbringing, Eggert has questioned the way we experience time and language, both of which factor into a religious upbringing.

In her art, Eggert uses temporal elements like clock hands and blinking neon to question elements we’ve always taken as a given.

We spoke with Eggert last week.

What inspired you to create the “Now” sculpture?

I made that work back in 2012, so I’m trying to remember! My work for more than ten years now has been focusing on giving material form to language and time. A lot of times, it’s the language we use to refer to time or describe time in our everyday lives, like the word “now.” I think time and language are these powerful but invisible forces that shape the way we experience the world and reality. And they’re unique to each person, but they also differ from place to place, culture to culture. The way you experience time is influenced by geography and stuff like that. It’s unique to everyone, but it’s also universal in that all our lives are defined by time. We’re all mortal beings, so our lives have a really specific beginning point and end point and we experience time in a really linear way. 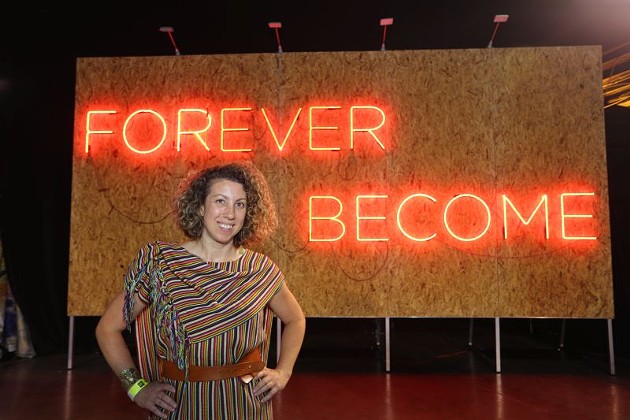 I’m really inspired by readings I do about physics and philosophy, and I grapple with the way science tells us that time is a construct and it’s not linear, and that’s just the way we experience it. I think about those things a lot when I make this kind of work. The “Now” sculpture was inspired by something I read by a physicist called Julian Barbour who talks about how time is actually a series of discrete moments that are each individual from one another, and each of those moments he calls “nows.” If you line up one now after another, it feels very linear because we can see the thread from each to each. But it’s kind of like the pages in a book. Physics thinks about if nows are pages in a book, we can potentially slip back or forward to a different page.

Has that been an interest of yours for a while?

It has been, I think because I grew up in a really religious family—my father was the minister of a Pentecostal church. Time is actually addressed a lot in churches because there’s always talk about our lives being finite, but then after we die you go to heaven or hell and then that time is infinite. There was this priority given on the afterlife, like that had greater priority than the time we were actually alive. Even though I grew up in that context and I was a believer when I was younger, that always sat uncomfortably with me and I felt like prioritizing after death instead of the only one chance we actually get at life seemed a little bit counterintuitive.

The other aspect of that religious upbringing is that I also grew up in a church that actively spoke in tongues, so I think that also influenced the language part of it.

Did your art and religion influence each other?

No, I became an atheist in college. 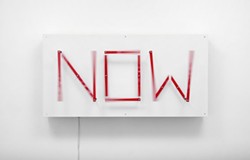 From 2012 to now, what direction has your work taken?

The conceptual theme remains the same. My work is still this kind of ongoing investigation about time and language and the intersection of those two things, but my materials have changed. I’m a conceptual artist and I have a background in design. So I brainstorm around an idea and then realize what medium or style best suits it.

At that point too, I was really doing a lot of kinetic sculptures, like learning how to use motors and sensors to make things move or react to a viewer as a way of embedding the element of time in the work itself and allowing the work to change over time. Since then, I’ve found other ways of using time that don’t have to do with physical motion of the work itself.

I do a lot of neon now, and the way I utilize neon and light is by flashing it on and off. There’s still a time-based element and this idea that things can appear or disappear, and the work changes in that way. But it’s more about a flashing than a spinning or a moving.

A piece that came before this “Now” sculpture was a kinetic sculpture called “Eternity.” That one actually used a real clock and clock hands to spell the word “eternity” once every twelve hours. It only used the hour and minute hands, which on the clock don’t move very fast, so when you first look at it, you don’t perceive it to be in motion even though it is, because the motion is so subtle. But over time, that word “eternity” only appears once every twelve hours.

After that is when I made the “Now” sculpture because that “Eternity” sculpture just appeared static, even though it was moving. And it created this long sense of anticipation, like when the thing would appear, and I wanted something that felt more immediate and gave that sense of one moment being replaced by another and another and another. But the word “now” is something that reoccurs in my work over and over, because I love how much the meaning of it can change in different contexts and the way it can refer to this split second, but also this century.

The funny thing is that just two days ago, I finished a new version of this sculpture, the same “Now” sculpture. Ever since I made that one that’ll be [at PULSE], that one is really fast. It has this noise to it from the motors turning these gears and belts and pulleys, and it has this sense of anxiety embedded in it. I’ve always wanted to make one that was smaller and slower and more zen-like. Not such a long “now” as “eternity,” but a sense of anticipation, like you want to stay with it and wait for it to arrive and disappear. It feels more appropriate for the current time.

What do you hope viewers take away from your work?

We all exist in time, and time defines our lives so much, but we rarely stop to think about it very much. New Year’s Eve, birthdays, those times we are like, “Oh, time has passed.” But a lot of times, time is more of this continual structure system and not so much existential inspiration or thought reflection.