Photos by Lauren Wolverton/Connect Savannah
Left: Don Caskey while visiting Savannah's Tramp Art Studios. Right: A new tattoo of Savannah's Waving Girl.
Don Caskey spends every weekend staked out in a tattoo shop lobby, getting to know each and every person who comes through the door. Every inch of his arms is covered with tattoos of stars, aliens, flowers, and first names. Within a few days, half the people he’s met have the name “Don” tattooed on them. Then, he packs his bags and hits the road to do it all over again in a new city. In the first week of 2021, it was Savannah’s turn. It all started when Caskey was diagnosed with stage 4 kidney cancer in December of 2019 in Toledo, Ohio. He had one kidney removed, but the cancer had already spread to his lymph nodes. So, he accepted that his cancer was not going away and decided to make the most of the time he had left. After he recovered from surgery, Caskey started exercising regularly. Then, he got a tattoo in honor of his cancer fight. On his right arm is the image of a dying pine tree, covered with the kidney-cancer ribbon. Underneath is the message “I’m still standing.” “In July, I looked down at my tattoo and I realized that the only thing I can take with me when I die is memories,” Caskey said.
click to enlarge Courtesy of Tramp Art Studios
Dre Edwards tattoos Don Caskey at Savannah's Tramp Art Studios.
Caskey decided right then to start asking people to get matching tattoos with him in the spirit of making memories. It started with friends and family, then turned into something bigger. “After four or five weeks of asking people, I went into this little restaurant-bar in Ohio and this girl, it was her first day of working, I asked her to get a tattoo with me, and she said ‘sure!’” The very next day, Caskey and the woman got matching butterfly tattoos. Two days later, another woman asked about Caskey’s fresh ink, heard his story, and got one with him too. After his twelfth tattoo, Caskey’s story was shared on Facebook, where it went viral. Caskey received hundreds of messages from people across the country wanting to get involved. He decided to leave home, head to Lima, Ohio, and see what happened. “I said ‘Hey Facebook! Lima, here I come!’” Caskey said. “I got 30 tattoos in one weekend with people I had never met.” Since then, Caskey has been tattooed in dozens of cities with hundreds of people. Both his arms and parts of his legs are now covered with everything from astrological signs and roses to mushrooms and dragons. “I kind of drive around, post where I’m going, and people show up for tattoos,” he said. On New Year’s Eve, Caskey landed right here in Savannah. He says Tramp Art Studios welcomed him with open arms, giving him a total of 14 tattoos before he left town. Artists Billy and Kirsten Cassat, Taylor Keel, Dre Edwards, and Josh White all joined his journey, either tattooing him or getting matching ink themselves.
click to enlarge Lauren Wolverton/Connect Savannah
Don Caskey shows off his indelible memories at Savannah's Tramp Art Studios.
Whitney Taylor and Alex Hornick also got tattoos with Caskey, and say it was incredible to be a part of his journey. “A random decision to go get a tattoo turned into meeting such an amazing person,” Hornick said. “I think that everything happens for a reason, and here we are.” That reason, Caskey believes, is to spread hope across the country. “At first I was gaining memories, but it’s gotten to be much more than that,” Caskey said. “I get people from around the world, every day reaching out to me, telling me how I’m inspiring them to get through whatever difficulties they’re going through that day. That’s a very humbling, but overwhelming in a good way, experience.” When asked which tattoo is his favorite, he said it would be impossible to choose. “Every one of these, somebody gave a part of their body for me and they supported me by doing so,” Caskey said. “I don’t have a favorite. Each one is their own story.” Caskey documents each story on Facebook in a photo album titled “Celebration of Life.” He says he stays in contact with almost everyone he meets and has gained a new outlook on humanity.
click to enlarge 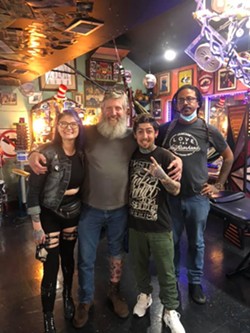 Courtesy of Tramp Art Studios
Don Caskey hangs out with the crew at Savannah's Tramp Art Studios.
“I believe that there’s more good in the world than bad,” he said. “You see all the negative on TV, on the news, but I truly believe that most people in this world are inherently good. They want to raise a family, have a roof over their heads, and be good to other people.” Caskey says he plans to continue his travels until he runs out of room on his body. “I’m going to go until I get filled up,” he said. “As long as my health is good enough, I’m going to still meet people. I feel better than I’ve felt in 20 years, but the cancer is still there. Eventually, it’s going to cause a tumor somewhere. But right now, I feel good.” Caskey says that no matter where his journey takes him, he’s happy to have a piece, or 14 pieces, of Savannah with him forever. 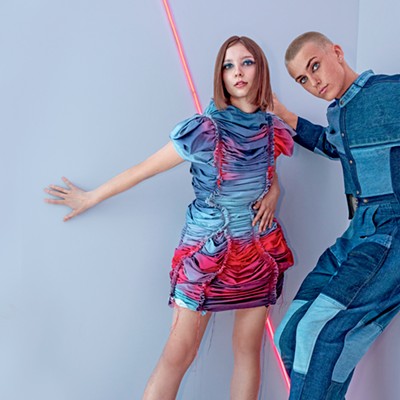 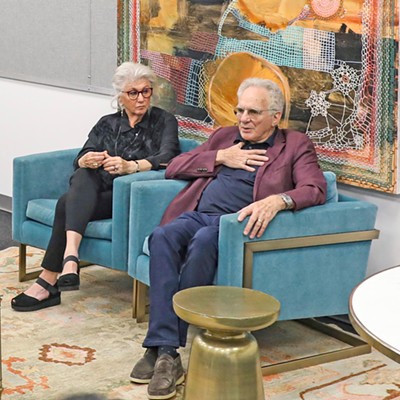