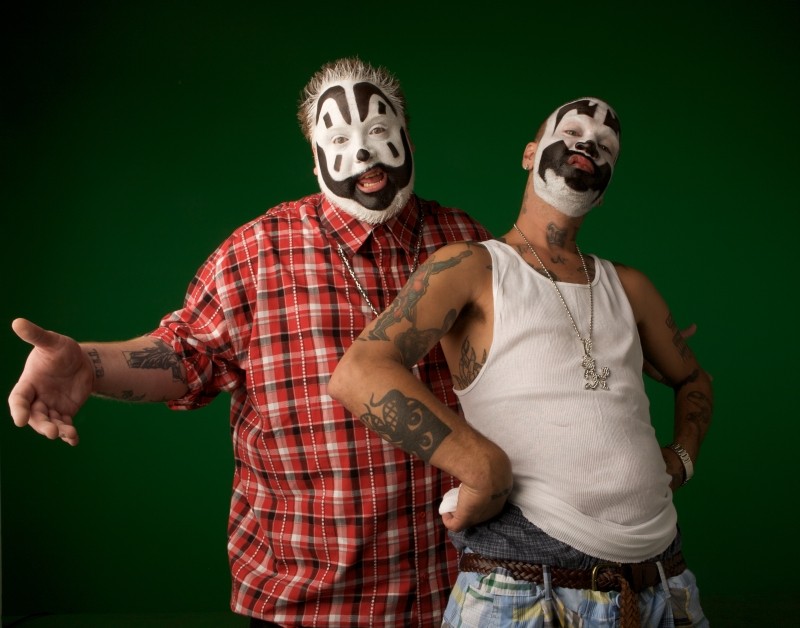 I'M IN fierce denial, but when Psychopathic Records calls me, I admit it to myself: I’m hungover.

The night preceding an interview with Insane Clown Posse was one of those perfect Savannah nights. After several great shows, including one at a brand-new DIY venue, I found myself at the neighborhood bar.

The place was brimming with musicians chatting about home recording and distribution, curators spearheading fresh exhibitions, non-profiteers with great ideas.

Everyone had good news to share regarding their current projects; there was an untouchable joy in the air, the warmth of a big creative family. There were also many celebratory rounds of shots.

My father always talks about what he calls “tribes”—the chosen family and loose collectives that people with common goals, backgrounds, or interests find and immerse themselves in.

Need an example? Look no further than the unbreakable and fascinatingly devoted culture that surrounds Insane Clown Posse.

Growing up in impoverished Detroit, Joseph Bruce (Violent J) and Joseph Utsler (Shaggy 2 Dope) rapped on the streets together, inspired by Beastie Boys, N.W.A., and their local scene. To distinguish their group from local gangsta rap acts, they began exploring horrorcore themes; not only did it help them stand out, but it also created an emotional outlet for its members to confront the violence and poverty that was a part of their childhood.

With their former hype man’s clown makeup being an audience hit, they donned face paint and changed the name from Inner City Posse to suit their new style.

The culture of ICP is studied in graduate degree programs. Their label, Psychopathic Records, has bloomed into a fully loaded hip-hop roster.

Even more enthralling than white dudes rapping about eviscerating rednecks and marveling at nature’s wonders? Their fan base. Named after the 1992 ICP track “The Juggla,” Juggalos and their world are a pop culture obsession to outsiders.

Showering themselves in cans of Faygo, inking their skin in ICP’s hatchetman logo, requesting women expose their breasts in declarative unison, it’s all been lampooned: SNL, It’s Always Sunny in Philadelphia, and Workaholics are some of the most recent TV shows to have taken digs at ‘lo life.

It goes beyond parodic fascination, though; after a long battle, the 6th US Circuit Court of Appeals finally ruled in favor of a lawsuit filed by ICP after the FBI wrongfully labeled Juggalos a violent gang.

I scroll through some photos from the last Gathering of the Juggalos, a festival/family reunion for ICP fans. It feels like someone’s squeezing my temples with calipers. The phone rings.

“Are you ready to talk to the one and only Shaggy 2 Dope?” a Psychopathic Records rep asks me.

I don’t know if I’ll ever consider myself truly ready.

Shaggy speaks with languid swagger about ICP’s latest releases, The Marvelous Missing Link: Lost and Found. A part of the Dark Carnival saga—the third Joker Card in the second deck, to be exact—Lost is the scarier, darker chapter; Found is the more celebratory album, with humorous turns and a jollier overall spirit.

“It’s not how we usually do stuff; we just plant seeds,” Shaggy says of Lost. “We didn’t have a tough time recording it, but it was hard. I can’t speak for all artists, but when we’re in the studio, you feel that shit. You feel the lyrics, you feel the beats, you feel everything. You’re in there because you have to be in that mind frame.”

With the growth of Psychopathic, the duo are no longer soley responsible for the grunt work on their projects; however, Shaggy affirms that he and Violent J are involved, in some manner, in every aspect of the music-making and brand.

“The only difference is that now we work with producers that give us full tracks,” he explains.

“They’ll sit down, write, and arrange it, whereas back in the day, we’d sit down and we’d make our tracks together. From a lazy standpoint, it’s a lot easier, because being in there for 12 hours making beats then doing vocals takes a toll on you. With this, we kind of went back to the old-school formula. We’re proud of it—it’s a really great record. I know everybody says that, but we really are.”

“We’re in the lab, we do 12-hour sessions, the next day do 12 more,” he says of the ICP recording process. “The studio is our life, and being up at Psychopathic Records, we’re not your average rappers. We don’t just show up at the studio, spit out 16 bars, relax, and leave someone else to mix it. We’re hands-on with it.”

Shaggy and Violent J both write, taking turns to spit on one another’s verses.

“I do have a ghost writer,” Shaggy says.

“All the greats have one. But I also write my own shit; it’s just a matter of what the track means. I know so many people that got ghostwriters and shit, and before...I ain’t going to sit here and say they write over our shit every time, but I ain’t got beef with it,” he says.

“If something’s nice, it’s nice. I ain’t not going to rap because I didn’t write it. Michael Jackson had ghostwriters, what’s that tell you?”

Later, I wonder if a ghostwriter was responsible for the now-infamous ICP line, “Fucking magnets, how do they work?” from 2009’s oft-lampooned “Miracles.”

One song on Lost, “Confederate Flag,” turned out to be a particularly timely anthem. Released a few months before the Charleston church shooting and ensuing removal of the Confederate flag from the South Carolina State House grounds, the song fumes: “Out here pretending like you ain’t offendin’/I say fuck your rebel flag/you redneck judges with racist grudges.”

(While they may call out white supremacists, don’t mistake ICP for a PC bunch: “Confederate Flag” goes on to utilize homophobic slurs to tell those racists precisely where they can stash their banner.)

Coming from Detroit and currently residing in its outskirts, the Confederate flag issue is close to Shaggy.

“I know you see a lot of that shit down [South],” he acknowledges, “but believe, where I live right now in the country...there are too many big pickup flagpoles in the back, or bed, or whatever, with a big-ass rebel flag. Why don’t you go drive out to a Tigers game in downtown Detroit and see how people do it there? You got big balls out here, let’s see if you get a little closer.”

The flag issue runs deep in ICP culture; the group has a tradition of throwing a rebel flag-draped scarecrow into the audience during their hit “Chicken Huntin’” and encouraging their fans to rip it to shreds. In fact, “Confederate Flag” was a continuation of “Your Rebel Flag,” released in the early ‘90s.

“We said, we gotta make another one about that,” says Shaggy. “Who would have known that the Confederate flag would have been banned, burned, whatever the fuck, you know? Which, I thought, was a good thing.”

With years in the game and a fan base that continues to steadily grow, he plans to “roll ‘til the wheels fall off.”

“It’s a full-time job—this is our life,” he attests. “This is what we do. If we weren’t doing this, who the fuck knows what we’d be doing? I’d probably be one of them weirdos sleeping on the sidewalk.”

“The kids are hyper, everything’s more intense there,” Shaggy praises.

He makes sure to state that, hatchetman-tatted or not, all people are encouraged to attend the concert.

“If you’re not a Juggalo, don’t be scared to check it out,” he urges.

“And I’m not just saying that for ticket sales! I know a lot of non-Jugs are freaked out by Jugs. It ain’t like that, yo. Go out and have fun. You never know—you might love the shit out of it.”

After we say our goodbyes, I listen to Lost single “Vomit,” in which Beelzebub throws up on the faces of hell’s newest residents as they enter his dimension. The vivid lyrics, coupled with memories of last night’s Wild Turkey, make me shudder.

I think about the night before, telling folks I’d be interviewing ICP the next day. Everyone has a strong, strong opinion on the group, on Juggalism, even if they haven’t heard an ICP song. I’m guilty: transfixed whenever new Gathering photos are released online, never a listener.

Juggalos proudly revel in the basest elements of culture and humanity; they also champion the most sincere. The same group that allegedly flung feces at Tila Tequila also created a halfway house for struggling Juggalos and Juggalettes.

There’s the story of Cannibal, a Juggalo who died while jumping between a mugger and his victims. There are food drives, toy drives, organized by ICP fans.

Is that what’s so difficult for outsiders to digest: seeing that kind of complexity spelled out in black and white face paint? We love our golden Captain Americas, our sinister-to-the-core Emperor Palpatines; is the unapologetic “whoop-whoop” of thousands who have created their own idea of family too complicated for us to process? Who are we to fetishize someone else’s sense of belonging and community?

The phone is still in my hand as I turn it all over in my head. I set it down, walk to the restroom, and vomit.

P.O.D., Alien Ant Farm, Fire from the Gods, Powerflo @The Stage on Bay 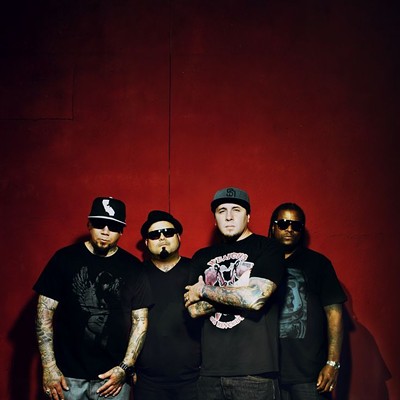