Irish Jews: A closer look at a lesser-known aspect of the Irish experience

Daniel O'Connell: The Emancipist, Hero to the Jews and in Savannah, Thurs. March 15, 7 p.m.

IN 1957, the mayor of Boston, James Curley, introduced his Dublin counterpart, Robert Briscoe, to an audience as follows:

“There once was an Irishman and a Jew... And here he is.”

Like any good joke, it has an element of truth. Ireland has only three synagogues and about 2,500 Jewish residents out of a total population of 4.7 million.

They are not a joke. They exist and thrive on an Emerald Isle that’s richer than you think.

“We often have such a narrow understanding of Ireland,” says Dr. Howard Keeley, Director of Georgia Southern University’s Center for Irish Research and Teaching. “Ireland is much more complex and interesting. Being Irish means all sorts of things.”

Keeley hopes to get that message out there into our consciousness with a new exhibit that’s on display at Savannah’s Congregation Mickve Israel, the third-oldest Jewish congregation in America with a “punching above its weight” story of its own.

The exhibit explores Irish-Jewish connections in literature and history. The displays traveled to seven different Irish cities and to New York City, Washington D.C. and the San Francisco Bay area before spending “the most Irish month of all” right here with us.

“Though the Jewish community of Ireland is small, it has been immensely influential,” says Shane Stephens, Ireland’s Consul General in Atlanta, the Irish government’s official representative in the Southeastern United States. “It’s quite dramatic in the Irish case.” 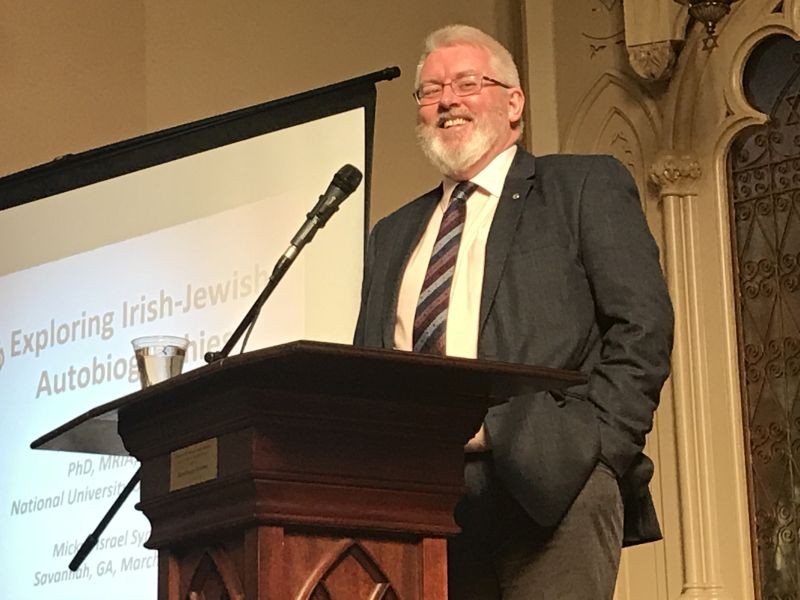 Pol O Dochartaigh, Deputy President of the National University of Ireland in Galway, speaks at Congregation Mickve Israel, as part of an exhibit on Irish-Jewish connections. (photo Orlando Montoya)

“It’s been there all along,” says Pól Ó Dochartaigh, Deputy President of the National University of Ireland in Galway, whose studies focus on Jews in Irish literature. “But nobody thought to take it all and say, ‘Okay, what threads are running though this?’”

And so now we have to talk about fictional characters like Leopold Bloom, the outsider in James Joyce’s “Ulysses;” Shylock, the Shakespearean moneylender in “Merchant of Venice;” or Melmoth, the titular, demonic “Wandering Jew” of Charles Maturin’s book.

All of these anti-Semitic characters greatly influenced the English speaking world. The exhibit doesn’t shy away from this history or the more complex appropriation of Jewish struggle in the struggle narratives of Irish nationalist movements.

“We’re investigating what the representation of Jews in Irish literature says not only about Jews in Ireland but also what it says about Irish identity,” Ó Dochartaigh says.

Of particular interest to you and me are the exhibit’s Irish-Jewish-Savannah connections.

Our city’s first St. Patrick’s Day parade in 1824 welcomed the Irish-born Catholic Bishop of Charleston, who delivered an address in which he compared the Irish in their native land to the Israelites in their captivity. 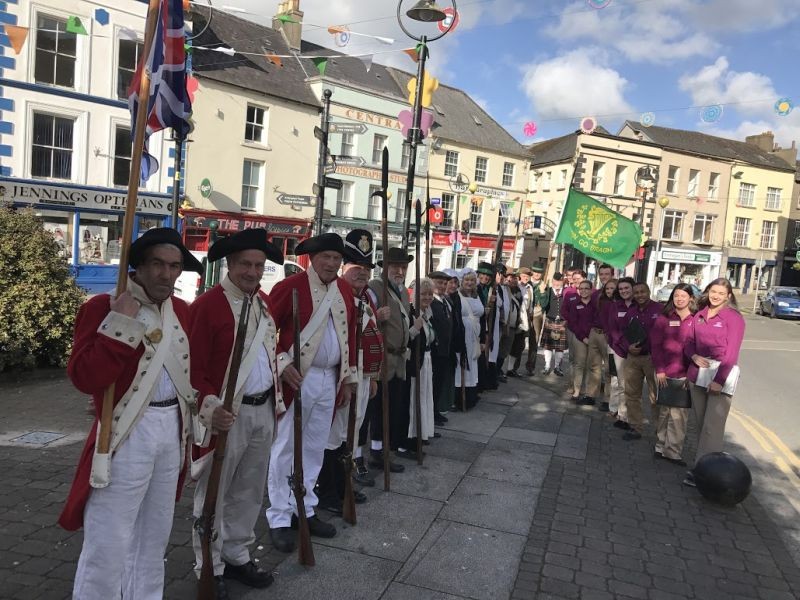 Georgia Southern students interacting with a group of historical re-enactors focused on Ireland’s 1798 Rebellion and the follow-up 1803 rebellion organized by Robert Emmet, after whom Savannah's Emmet Park is named. The students are in the town of Enniscorthy in central County Wexford, Ireland.

When Savannah’s Hibernian Society was formed in 1812, among its first members was Isaac Minis, grandson of Abraham Minis, one of Savannah’s original Jewish settlers in 1733.

The Hibernian society lives on today, as does the Minis family.

And then there’s George Solomons, an Irish orphan who came to Savannah by way of Mississippi and ended up serving Mickve Israel as its rabbi for the first four decades of the 20th Century. A Jewish reformer, he also chaired the Georgia Interracial Committee.

You might call his great-great nephew, Mires “Bubba” Rosenthal, Jr., the congregation’s current president, an official supplier of St. Patrick’s Day, since, as owner of Habersham Beverage, he might sell you some fine Irish whiskey or beer. The world unites in drink.

“We are pushing the message of Ireland’s diversity,” says Stephens, whose government is sponsoring the exhibit.

“Ireland really has changed quite dramatically in recent times. The most obvious thing is that our prime minister isn’t called Murphy or O’Connor.”

And he’s openly gay, only the fourth openly LGBT head of government in the entire world.

So let’s change what we think of old Eire.

And maybe old Irish Savannah and the whole world while we’re at it.

We humans are a lot more than our jokes make us out to be.