Road bowling is open to all ages and skill levels. To form a three-person team, visit www.aohsavannah.com/#!irish-road-bowling/c14jr and sign up. Cost is $15 per person with pre-registration and $20 day of. 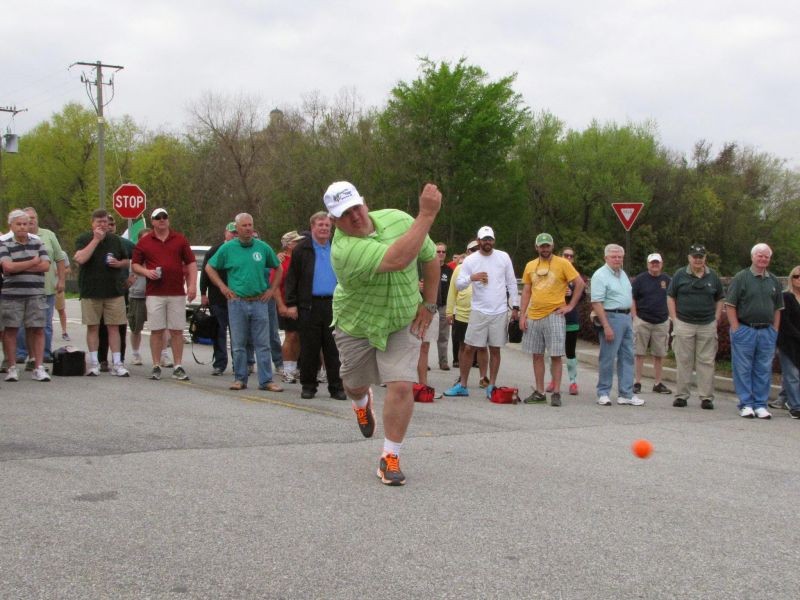 Road bowling is a mix between golf and bowling, and it is tricky.

ON Saturday, take off your green tutus and fake red beards and don a pair of bowling shoes instead.

It's easy to forget, in the midst of alllll that green downtown, that St. Patrick's Day is actually about a saint—the patron saint of Ireland, to be exact.

The Ancient Order of Hibernians ensures that Irish heritage is remembered and celebrated on the big day. One way they do that is through a good game of Irish road bowling.

This is the tenth year that the Savannah division of AOH has hosted Irish road bowling. Past AOH president Chris Hagan was inspired by a PBS documentary on road bowling and decided to start an annual tournament at the racetrack on Hutchinson Island.

Road bowling is a mix between golf and bowling, vice president Walter Harper says, and it is tricky.

On bowling day, you and two other people team up and receive your ball, a 28-ounce steel ball the size of a tennis ball and painted bright orange.

"You roll it, and where it goes off the road, that's where you roll the second," says Harper.

Like golf, the teams keep their own score. The best score is 18, and Harper has done it in 22. The teams also use spotters to keep an eye on the balls, which lose their bright orange color after taking a few hits.

"It's difficult because you've gotta read the road and throw it, but once it goes off the road, that's it," says Harper.

"It's kinda crazy, but once you get involved, you understand," adds president Brian Crowley. "It's a relaxed but competitive sport."

In videos of road bowling, you'll see bowlers wind up and pitch the ball down the road, which Harper notes is not a requisite bowling stance.

You'll also notice that the roads are still open while bowlers hurtle their balls down the road.

"They don't close the roads; they're still open as you're bowling," Harper notes. "They just put up little signs that say 'Road bowling in progress.' Here, for safety reasons, we have chosen a closed course."

Irish road bowling is not reserved solely for Irish folk, but it is extremely popular in Counties Cork and Armagh. It's also incredibly popular in West Virginia, as Crowley recently learned.

"Basically, it comes back to the Civil War," Crowley explains. "A lot of the Irish fighting in the Civil War in West Virginia would play road bowling between the battles."

After the dust settles on the racetrack, AOH hosts a party with bangers, shirts for sale and plenty of Irish music.

AOH was formed in 1836 to protect Irish Catholic priests from torment and ridicule.

"It morphed into helping other Irish Catholics because when they came over, they weren't given the same opportunities other immigrant people were given," Harper explains.

"It was to help foster them and give them a way up, as it were."

Now, the Savannah division of AOH extends that same hand to other less fortunate groups in the city. Proceeds from Saturday's event help several charities hand-picked by the AOH—Savannah City Mission, Inner City Night Shelter, and Fresh Air Home on Tybee are just a few.

AOH says the competition is open to men of Irish heritage and who practice Catholicism. In all they do, AOH promotes Irish culture and heritage.

Road bowling is not meant to serve as a counter-offer to the revelry of the St. Patrick's Day parade. Rather, it's a more traditional complement to the fun festivities.

"I'm Irish born and raised, and my first experience with St. Patrick's Day was, 'wow, this is cool! All these people wearing my colors, celebrating my national day,'' Crowley recalls.

“In Savannah, I was blown away by how genuine and authentic the appreciation of Irish culture is. The parade is a wonderful affair.”