Is it a 'boycott' if you don't live here? 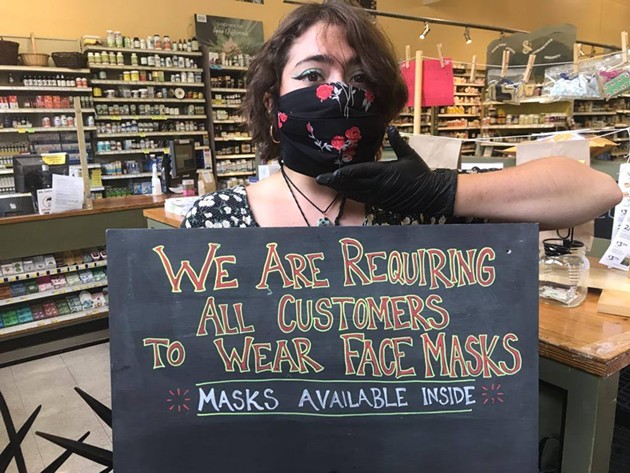 A SMALL and geographically disparate social media movement that aims to align protective face masks with fear and conformity targeted a local health food shop in Savannah on Wednesday.

When Brighter Day Natural Foods Market posted to Facebook that they would require all customers who enter the small and often-crowded store to wear face masks, they were adhering to national and global pandemic health recommendations and responding to the preferences of many of their customers.

They offer curbside pick-up to accommodate those who don’t feel comfortable in a mask, and they have committed to making masks available, for free or by donation, to those who want to enter but who don’t have the proper attire.

Customers posted comments of gratitude for the “socially responsible,” “common sense” mask measures that they felt would “prioritize health and wellness” and help to “protect the vulnerable.”

But the initial reaction was, at a glance, not so good. In fact, it seemed at first, in a landslide of critical comments and anti-mask memes, that the small business had made a dire mistake.

“Might want to rethink this and actually give your CUSTOMERS a choice?,” posted Karen Weibel. “We are all adults here and can decide what’s best for our own health.”

“Most people who shop at health food stores are not into masks ,” Bonnie Gembrin said.

The apparent clientele threatened to withhold their business unless Brighter Day changed its policy, but upon closer inspection, something was amiss: Weibel appears to be based in Texas; Gembrin and her family live in the San Francisco Bay Area; another is a professional dog groomer in Ruskin, Fla.; yet another, a medical supply distributor in Chicago.

Indeed, nearly all of the negative posters lived hundreds of miles from Savannah, or had their locations hidden while championing their participation in protests of health safety recommendations nationwide.

Not every bit of negative feedback was from a foreign operative: The owner of a local apothecary peddling “organic plant magic,” and a resident of Pooler who was once tased at the end of a high-speed police chase were among those who clicked “angry face.”

But over the course of Wednesday, of the approximately 60 angry face emojis, dozens originated in Las Vegas, Salt Lake City, South Dakota, even the Cayman Islands, according to data available on the posters’ social media platforms.

Some anti-mask posters claimed to be concerned about oxygen restriction. But it turns out their true concern was sucking the oxygen out of the room:

“We boycott every store with a mandatory mask policy,” volunteered Sharon Schlicher, a midwife in Oklahoma.

While there were upwards of 260 comments by Thursday morning, many names from this “we” contingent appeared repeatedly, wielding the platform to inflate the effect of their demonstration.

When asked why they might spend their time criticizing the legally and socially accepted decisions of small, privately owned businesses in a community states away from them, the Ruskin, Fla. dog groomer invoked the First Amendment.

Freedom of speech is deeply important, particularly in a time where there is so much to question. But here the First Amendment is a thin veil over a familiar strategic maneuver to manipulate social media and meddle with optics in a way that damages a targeted business or person in a community.

It happens all the time: a cacophony of commenters posturing, as the dog groomer did, as locals, intentionally creating the false impression that the negative voices are the majority.

While anti-mask protestors are making headlines left and right (this one included), according to a recent survey led by researchers from Harvard Kennedy School, Northeastern University, and Rutgers University, they are in the vast minority across the U.S. David Lazer, a PhD and distinguished professor of political science and computer and information sciences at Northeastern who contributed to the research said the data shows that support for social distancing measures and business precautions is “pretty much a bipartisan consensus.”

In the survey, 96% of respondents reported they had trust in hospitals and doctors to do the right thing to best handle the COVID-19 outbreak, 93% said the same about scientists and researchers, and 88% about the CDC.

The overwhelming consensus among each and all of these groups at present is that wearing masks in public areas does not eliminate, but does substantially mitigate, risk when it comes to thwarting the spread of COVID-19, and that, for people over the age of two, wearing a cloth mask for short periods of time does not pose a health risk unless your doctor tells you otherwise.

Some fear that requiring masks is a certain harbinger of an impending police state, evoking images of masked handmaids in Hulu's “Handmaid’s Tale.” Indeed, legally-enforced federal commandments about attire — such as laws that women must wear shirts in public — have been seen as infringements on rights over the decades.

Meanwhile, individual businesses choosing to indiscriminately require shirt, shoes, and — in a global pandemic — a mask, while offering alternatives for those who can’t comply, are working to design a favorable experience for their customers that the public can take or leave.

Time will tell who is right about masks and coronavirus, but a precious few things are certain at present: Firstly, mask aversion is a familiar chapter in the agenda of vaccine skeptics, serving to sew doubt in public health authorities as a coronavirus vaccine looms on the horizon.

When a widespread conspiracy theory video featuring the disputed findings of a known vaccine skeptic went viral last week, I went down a rabbit hole, speaking to rhetoric experts and propaganda researchers about why a piece of media with these vaccine-skeptical undertones had reached so far, so quickly.

Media scholars agree that social media platforms, Facebook at the forefront, have devolved into little more than echo chambers of misinformation. In part, this is because these niche activist groups — be they “coronavirus truthers” or “flat Earthers” or “Holocaust deniers” — are desperately persistent and therefore disproportionately loud:

“There’s no countermovement for the truth,” Dr. Joan Donovan, research director of the Shorenstein Center on Media, Politics and Public Policy at the Harvard Kennedy School, told me in a recent interview.

“The vast majority of Americans believe the stay at home orders are a good idea, but we still spend a ton of attention on the protestors and the spectacles and these health misinformation stories because they can really harm people.”

Another certainty, the politics of bodily health aside, is that our local businesses need us more than ever, because their supply chains have been disrupted, because their staff may have been furloughed, because their regular customers are sheltering in place, and now, because trolls from other cities and states are leveraging their Facebook pages to promote a niche political agenda.

Brighter Day owner Brad Baugh commented via a text message that the owners’ initial reaction was to take the post down when they saw controversy unfolding in a place meant to convey helpful information to their customers.

“But after seeing the outpouring of positivity,” he said, “we decided not to.”

The big box store business model cannot and will not meet a local community's needs in a crisis. But small independently owned markets, such as Brighter Day, can.

This was laid bare in the Great Toilet Paper Debacle of 2020: When due to supply chain disruption there was no toilet paper at Savannah’s national chains, the small businesses — the Asian Market on Montgomery and Red and White — were the first to find a way.

As our local businesses need us, we need our independent, small businesses and the sense of community to which they are central.

But as the world seems to spiral, there are constantly new forces against which we need to defend them: by being supportive, by caring about others, and maybe, as social media becomes little more than a swirl of media manipulation, by spending less time reading Facebook comments.