Is your Stopover hangover gone yet? 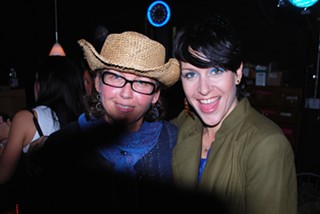 And so it comes once again, a harbinger of spring as reliable as the robin, that unofficial Savannah holiday of holidays, St. Patrick's Day. We hope you enjoy our annual St. Patrick's special issue as much as we enjoyed putting it together.

This year's cover girl, photographed by Brandon Blatcher, is our own Jami Ganem, with dress and accessories by Custard Boutique and hair by Hotheadz Salon.

While St. Patrick's Day in Savannah is legendary for its partying spirit - which, as anyone who was out this past weekend could tell you, begins many, many days before the actual event - this week we offer a couple of takes on a topic that, while not commonly associated with St. Patrick's Day, is nonetheless the basic reason for it: Religion.

Robin Wright Gunn writes about the extraordinary preparations involved in the annual St. Patrick's Day Morning Mass at the Cathedral of St. John the Baptist, with stunning photos by Paul H. Camp.

J.R. Roseberry writes about the unlikely - but somehow typically Savannahian - pairing of the Tybee Church, aka, "Mayberry By the Sea," within the confines of a bar.

In addition, we have our usual St. Patrick's Day survival guide, including a parade map, and Frequently Asked Questions with updated info on parking, transportation, and various city regulations.

The government continues to run regardless of green beer, and Patrick Rodgers breaks down the latest goings-on in the state legislature, highlighting the most important and/or ridiculous new legislation proposed by our oh-so-enlightened representatives in the Gold Dome.

While at Connect Savannah we generally do our best to always look ahead, I thought it important to spend a little time talking about the recently-concluded Savannah Stopover Music Festival and what its obvious success means.

Before we get to the many and well-deserved kudos, it's important to state for the record that Savannah Stopover didn't happen in a vacuum.

While certainly nothing of the like has taken place here prior to Stopover, by the same token all the hard work that did come before - by local venue owners, musicians, promoters, technicians, and music lovers themselves - is what set the stage for Stopover.

That said, for Stopover to happen it took someone not only to have the idea, but someone with the gumption, expertise, connections and determination to actually execute it.

There are a lot of cultural figures in town very deserving of all our respect, and I don't want to shortchange them (nor make Kayne uncomfortable) by putting her on some kind of pedestal.

But one must give credit where it's due, and one huge truckload of credit must go to Kayne for her vision and work in putting together a brand-new music festival basically from scratch.

While she certainly didn't do it alone -a virtual army of enthusiastic and talented voluneteers more than did their part - I think we all can agree that without Kayne there's no Stopover.

And what's more important: With Kayne, we got this Stopover in particular - a fun, irrepressible, relentlessly positive, relentlessly tasteful and thoroughly professionally-run event.

A few days in March may not sound like a lot. But for those of us who've wondered when Savannah would finally arrive on the big stage, Stopover may have been that moment when this often-staid town actually became as important as it often claims to be.

Many of the bands will probably move into obscurity sooner or later, but the feeling that Stopover engendered, where it counts - on the streets of downtown Savannah - was an amazing blend of conviviality, good vibes, and camaraderie of the cause of really great music.

The rapt, enthusiastic and knowledgeable reception Stopover received from everyone who attended signaled that Savannah, far from being a backwater, might be primed for the kind of progressive arts/culture/music scene that some of us hardly dared dream of before - it seemed that unlikely and that far away.

The whole scene at Stopover was not only straight out of what one might expect to see at Athfest, it was pretty much better than Athfest - not only musically, but in its incredible overall buzz and adrenaline rush.

While again, Stopover was far from a solo effort, at the end of the day we really have one person to thank for realizing this vision.

So, my personal thanks and appreciation go to Kayne Lanahan, and all of us at Connect Savannah were very honored and proud to have been a media sponsor of the event.

(Unlike a certain large local publication which openly "boycotted" coverage of the Stopover. Way to serve the community - by refusing to cover the biggest cultural happening in Savannah in a decade. Brilliant move!)