The man, the myth, the legend shares what he’s watching during quarantine

People are undoubtedly leaning on movies, TV, and music right now in these dark, uncertain times. It might actually be the apex of binge-watching, considering that most everyone is staying indoors right now. We decided to sit down with some of the most passionate film fans and connoisseurs that Savannah has to offer, to find out what they’re watching right now and why movies mean so much to them.

Today we’re talking with Ryan Graveface, owner of Graveface Records and the Graveface Museum, among other ventures. He’s a pillar in the local arts community, and is an absolute connoisseur of music, films, and more. There’s an ongoing GoFundMe campaign that is raising money to help keep the record store afloat during the pandemic, which you can contribute to at gofundme.com/f/help-graveface.

For now, let’s dive in with Ryan Graveface. 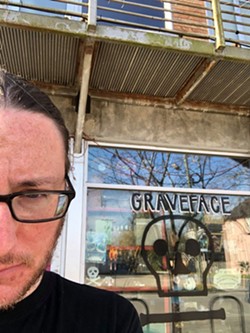 Tell me about a movie or show you’ve watched/have been watching during isolation.

I’ve been working on securing some pretty big (to me) licenses for my label Terror Vision. One of which is The Gate from ‘87 (fingers crossed it happens). The Gate is a quintessential goofy but rad demon monster flick from the 80s. It’s yet another “buddy” movie where the friends accidentally unleash a bunch of demons in their backyard.

It’s fucking perfect and the soundtrack literally couldn’t be better. There’s also a vinyl record element to it and nods to some killer metal bands. I won’t spoil it. Go watch it.

Why do you think you’re resonating with something like this right now?

Well, the way I make a living is by releasing records. So I have Graveface (label) and Terror Vision to do that. Graveface (the shop) makes almost no profit because there’s virtually no markup, especially on sealed stuff. So the majority of my Terror Vision life is spent researching copyrights and fighting with people and trying to find the original tapes etc.

I’m basically an archivist as most of the stuff I preserve wouldn’t be preserved otherwise. For the most part, the other labels out there doing similar things to me just focus on obvious titles that have already had releases in the past. So they’re what I call reissue labels.

Terror Vision is unique in that I only put out stuff that’s never had a release before. So this is resonating with me now because everyone is sitting at home, including copyright holders, and I figured I would try to get some bigger titles during this.

Give me a breakdown of your favorite scene/moment?

Oh man, that’s a loaded question with The Gate. The moment with the heavy metal album was pretty inspiring from a nerdy label guy angle as are the forced perspective demons. The dude in the wall I’ll never forget from my childhood.

Why is horror so important to you, and such a fixture in everything you do?

Horror is the only thing I’ve ever cared about. I liked documentaries when I was a kid but they feel like propaganda now to me (even looking back). Comedies are not for me as I don’t find people to be even remotely funny. Action is a massive yawn (dudes running around with guns? Gimme a break). Romance is a joke. Hollywood is bullshit. There’s no happy endings in life and I can’t stand films that pretend that’s how life is.

I hate being talked down to and feel that the majority of films that are released these days do just that. So horror is king. And mind you, 85% of it is absolute crap. But I’d rather watch their crap over anything else!

This might be the peak of binge-watching culture. Why, from your perspective, do you think people are grasping so tightly onto film and TV right now?

I am not the right guy for this question. I’ve never binge-watched everything and never will. I think it’s an awful way to digest media. And the thought of giving Amazon or Netflix or Hulu EVEN MORE MONEY makes me ill. I think people need to spend more time creating and less time consuming media.

There’s a lot of anxiety in the world right now, and I think we’re seeing a shift in the way that people view creatives from a perspective of value and professional importance because of the fact that people are using art (music, TV, etc) to help them stay sane. What do you hope is the takeaway from all of this, when it comes to the attitude the average person has towards someone who creates art that they may have previously taken for granted?

I think it’s temporary, I’m afraid. You are right, it’s currently different but it’ll go back to being absolute shit. As soon as people can get wasted with their friends and not have to be so aware it’ll be gone. I’ve never sold so many records (talking about my labels, not my store) in my entire life and it’s 100% because people are mostly sitting at home with extra money in their account and they now want to and have the ability to support the people they like and respect.

This will go away. On the plus side, I’ve made some amazing connections during this pandemic that are for life so that’s a pro.