Where: The Space Station at Starlandia (2438 Bull St.)

If you know Savannah Stage Company (SSC), you know that imagination and bravery are paramount to the team of local storytellers. This weekend, SSC’s improv troupe, (it), pushes further than ever before with one of the most creative formats available for the stage.

“For our fifth season, we had to figure out how to challenge ourselves even more,” explains SCC Artistic Director Jayme Tinti. “[We asked], ‘What can we do to highlight our values?’ An improv musical obviously takes a lot of bravery.”

Enter It’s B.I.G.: The Improv Musical, an original production that the audience co-scripts. With four performances over the weekend, no two will be exactly the same—and that’s the magic of it.

Though anything could happen, It’s B.I.G. has a loose framework to move the show along.

“There are other improv musical formats out in the world that we spent some time looking at,” says Tinti. “But what we needed to happen was to create our own format. It’s a 10-12 song musical, and every song is in a different style of music. The first song might be a hip-hop song, the other may be a bluegrass song, the third an opera song. Audiences get to choose those styles of music beforehand, then the audience will choose a protagonist from the troupe and get to name them.”

After selecting a team member as the musical’s lead, audiences will suggest a dream, or motive, for the character—maybe the character aspires to be an astronaut, or always wanted to travel to the Great Wall of China.

“Then we have an internal structure,” Tinti continues. “We study a story spine and basic elements of how to tell a story and build a story, so that’s what we’ve been working on, plus all the music and skills of improv. There’s a lot of structure, and then we get out there and we say, ‘Let’s do this!’”

(it) already utilizes music often, from their recent five-song mini-musical to everyday rehearsals.

“We’re taking something that we already sort of do and then taking that to ten,” Tinti laughs. Since the audience could suggest any style from trap to bossa nova, the musical performers must improvise, too. Keyboardist Cyd Prather and guitarist Ellen Sherrod have to act quickly and work together to create a comprehensive soundtrack for the actors to sing over.

According to Tinti, the production has pushed (it) members in extraordinary ways.

“You’ll see someone grow moment to moment,” she admires. “That’s sort of what this is all about. We didn’t set out saying, ‘Hey, what can we do really well? An improv musical!’ No. It’s, ‘What’s the hardest thing we can think of? An improv musical.’ Growth is a huge part of the company and is one of our values.”

In addition to plenty of rehearsing and practice, (it) received a workshop from fellow Savannah troupe Front Porch Improv.

“It’s an awesome resource to have other professional improvisers who we can turn to and say, ‘Hey, this is something that you guys do really well—can you come help us?’” Tinti says.

It’s B.I.G.: The Improv Musical will be performed right in the heart of the Starland District at Starlandia Supply’s new performance space, The Space Station. The multipurpose venue is SCC’s new mainstage and rehearsal space, and the troupe already feels right at home. 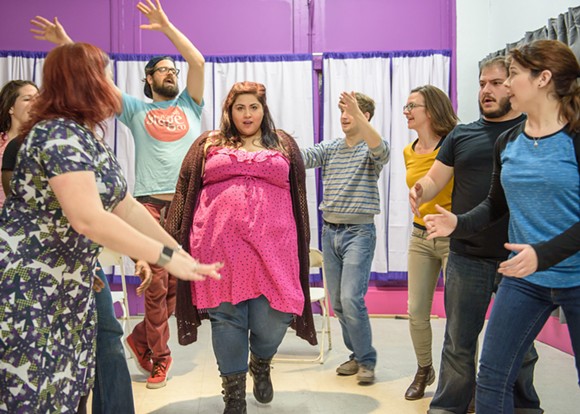 “The Space Station has been a game-changer for us,” Tinti attests. “We’ve had a lot of location issues...and there are a lot more of us than there were three years ago. To be able to rehearse and perform in the same location is a luxury we’ve never had, and it’s proving to be really helpful in thinking about where our bodies are in space much earlier in the process. It’s been really nice to find a home.”

And remember, audience—you’re in this, too! The energy and participation of attendees is crucial to a great improv performance, and (it) encourages everyone to get involved (and to get there early to get good seats and a couple free beers before the show begins).

“Try to be inspired by our bravery,” Tinti urges. “Maybe if you go to an improv show and never say anything and have suggestions running in your head, come be brave. We are failing and succeeding right here with you—we are not experts on this! We are all seeking bravery.” 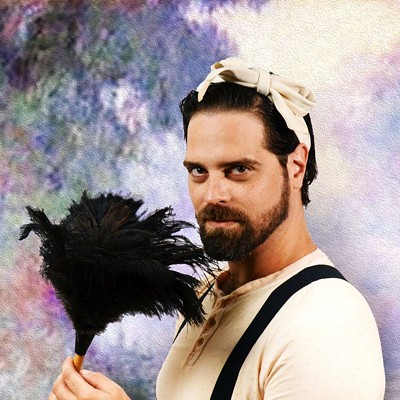