It's a wrap: Nicholas Sparks on 'The Last Song'

The bestselling author talks about the book, the movie and Miley Cyrus 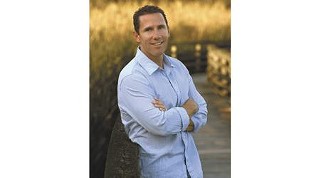 Nicholas Sparks will appear at Books-A-Million in Savannah Sept. 13, to sign copies of "The Last Song."

Production ends this week on The Last Song, the Disney-made film designed as a vehicle for teen star Miley Cyrus’ first baby steps outside Hannah Montana territory. The world will meet Tybee Island, in all its sunny, sandy glory, when the movie is released in January.

Nicholas Sparks, who wrote the screenplay, and the novel of the same name, was the studio’s first and only choice: With 50 million books in print, and eight No. 1 New York Times bestsellers, he has a deft touch for romantic drama. His A Walk to Remember and The Notebook – the books and the movies - are particularly popular among younger fans for the way they blend love, tragedy, adventure and redemption.

The Last Song, the novel, will be published by Grand Central Sept. 8.

It’s the story of Veronica “Ronnie” Miller, a 17-year-old New Yorker who hasn’t spoken to her father in three years. The divorce was ugly and especially hard on Ronnie, who’d shown promise as a classical piano prodigy, under her dad’s tutelage. Now she refuses to play at all and would rather go clubbing with her friends.

But dad has moved back to the North Carolina beach town where he grew up, and when Ronnie’s mom sends her and little brother Jonah down south to spend the summer with him, Ronnie is miserable.

Until she meets Will Blakelee, the town hunk, who turns out to be not just handsome and athletic, but sensitive and caring.

The Last Song is enormously entertaining and easy to read – Sparks’ patented blend of humanity, humor, pathos and hints of Christianity is in place – and is certain to continue the 43-year-old North Carolina resident’s hit streak.

His cross-country promotional tour brings him to Books-a-Million in Savannah Sept. 13.

The movie casts Cyrus as Ronnie, with Greg Kinnear as her father, Steve Miller, Kelly Preston as her mom, Kim, Australia’s Liam Hemsworth as Will and Carly Chaiken as Blaze, the first tentative friend Ronnie makes in town.

It was made in Georgia purely for economic reasons – under Governor Sonny Perdue’s new tax incentive law, it was cheaper to film here than in North Carolina, where the novel is set.

Sparks agreed to change the setting to Tybee Island. Ga. in his screenplay.

Although the author didn’t spend a lot of time on the Tybee set, he worked closely with the production team, and has nothing but praise for the film’s 16-year-old star and her mother Tish Cyrus, who is one of the executive producers.

“The Cyruses and Miley, they are really quality people,” Sparks says. “And that is something I can’t stress enough. You would think that with everything they’ve been going through, perhaps it would have gone to their heads. But they’re great people.”

As he says in this interview, though, the book and the movie are usually different animals. He’ll go to see it when it comes out next year.

Connect Savannah: OK, it’s the chicken or the egg question: Which came first, the novel or the screenplay?

Nicholas Sparks: I was coming off The Lucky One, and always after finishing a novel, my thoughts turn to what I’m going to write next. And part of that decision is based on what I haven’t done recently. Recently, I’d covered pretty much every age range from 20 to 50, including Nights in Rodanthe, which wasn’t a book, it was a film.

I always try to write original novels. So I said well, I can either go younger than 20 or older than 50. And The Notebook was such a big hit, so I was a little bit hesitant to do another story about the elderly. My mind was kind of wandering toward doing another teenage story. I hadn’t done one since A Walk to Remember.

It was at that time that Jennifer Gibgot from Offspring Entertainment called and said Miley loved A Walk to Remember, and she would like to do something like that. Jennifer asked if I had anything laying around? I said no, but funny you should say that …

I said OK, I’ll try to think of something. Because I had to have a novel anyway. I put all my thoughts into that, trying to make the story as different from A Walk to Remember as I can, but try to capture the same feelings. A lot of people who that novel loved it, and they loved the film, so I really wanted to capture that same kind of thing.

By the end of July 2008 I had the story, I went out and met wit the Cyruses and Disney and told them the story I was going to write in the novel, and they said OK, that sounds good; go ahead and write the screenplay.

Because they were on a time limit – they wanted to film the next summer – I went ahead and did the screenplay first, and followed it with the novel. But they were, at least in my versions, very close. It was the same arcs and the same situations with the characters and everything like that.

In the book, you talk about the beach kids drinking and doing not-so-good stuff. Was there some edict from Disney like “Don’t go too far with that stuff in the screenplay”?

Nicholas Sparks: I didn’t tone anything down, absolutely not. It’s always important to realize that in the end, films are a director’s medium. If you want to look at the entertainment world stage, that’s the actor’s medium. And novels are the writer’s medium. It just works like that. No matter what you write, it’s going to look the way the director wants it to look. I put in the screenplay, actors have opinions, directors have opinions – after I’m done with it. The studio has opinions, too. They may have wanted to tone some things down, for instance. So were there changes made after I wrote my screenplay? Of course.

I had no special edicts from Disney or the Cyrus family. However, they wanted to work with me because they’ve read my novels. My teenagers – the stars – they don’t do bad things. I just don’t write that. I don’t write about adultery, I don’t write profanity. Why? Because my grandparents are still alive. They read my books.

And the other reason is that when you start moving down that road, I find it very lazy storytelling. It’s a quick way to grab attention. Now if it’s important, and it adds to the story, sure. I’ll certainly have love scenes in my novels, but they’re always between consenting adults.

Marcus, the leader of the “bad kids” in the book, is a pretty lousy guy.

Nicholas Sparks: I think they probably changed Marcus’ character a bit. We’ll have to wait and see. To be quite honest, I haven’t really looked at the latest version of the screenplay.

The job of a screenwriter is funny. These are rules set down by the Writers Guild of America. Although the first writer gets full credit, how much of my original screenplay is in there, I can’t necessarily say. I’m sure most of the major story arcs are in there.

So the film is an interpretation of the book.

How do you get inside the brain of a teenage girl like that?

Nicholas Sparks: Number one, I have five children! Number two, I’ve been coaching high school track and field for the past four years. I just retired. My son was an athlete so I went out and coached their team. So I hang out a lot with teenagers.

I remember what it was like. In some ways, it’s a lot easier to write a teenager than it is to write an older person. Because you’ve been through some of those experiences before. Whereas, for instance when I was writing The Notebook, I’ve never been 80 with a creaky body, and had a wife with Alzheimer’s. Going back is a lot easier because you can draw from your memory.

But you don’t want to get it wrong. Like the phrases that Ronnie or Blaze would use, you don’t want young readers to go ‘Oh, that’s just stupid. I would never say that.’

Nicholas Sparks: I’ve always had a very good ear for dialogue. To be quite frank, the primary challenge with Ronnie, was that generally I like likeable characters. So this was very much a stretch for me, to write a character that in the beginning of the book was not very likeable. She was rude to her mom, she was rude to her dad.

I wanted to slap her a couple of times!

Nicholas Sparks: Of course! But then, how do you inject enough humanity into her, so that you know that deep down she’s a good person? So you have her comfort her brother, you have her throw the money into the jar for the pets. You do these things so you know that she’s real. That was a challenge.

Ronnie and Will bond over a loggerhead turtle nest on the beach. That was a nice touch.

Nicholas Sparks: That was the one element I did not have for the novel. That was what was keeping me from fully committing to Disney, or to anybody, or even committing to the story. It was the question of what drew these two characters together. Because the way the story began, she wanted nothing to do with him. Nothing at all. So how could you force these two characters, essentially, to spend time together?

It had to be during the summer, she had to be new in town, and whatever happened had to start in June and end in August. Because you always want a conclusion.

In most books, usually what they do is a summer camp, or a summer job. Starts in June, ends in August, perfect. Except for the fact that it’s not very original! And it’s boring.

When you live in Georgia, or Florida or the Carolinas, sea turtles hatch in August and September. When I say it, it’s very obvious. But when was the last time you read it in a novel, or saw it in a film?

The nest hatching is a pivotal moment in your book. Do you know how they did it for the movie?

Nicholas Sparks: They got real turtles. That’s what I heard. I wasn’t there. They had one chance to film it, because these are real turtles, and they’re going for the water. I’m sure they’ll probably add some more with computers, or do things like that.

Do you get excited when a new book is about to come out?

Nicholas Sparks: I think people will really like this novel. It’s different from what I’ve done, and that of course meets my criteria of what I try to do. I try to get the kind of story of mine that they feel they haven’t read before, and I think like I accomplished that. I think people will relate to this on any number of levels.