It's not the humidity, it's the heat: Collective Face closes season with Cat on a Hot Tin Roof

'What an iconic play,” director Poole marvels. “It’s set in the South, it has family dynamics, sexual tension, heat.'

Cat on a Hot Tin Roof

AS THE heat index rises and the summer sweat begins to bead on our foreheads, Collective Face Theatre Ensemble will send off with a sumptuous, feverish season finale.

The group’s fifth season has included a true variety of productions, including the hysterical 9 To 5: The Musical and the cherished Pygmalion. To close their fifth season, a talented cast will take on a Tennessee Williams classic: Cat on a Hot Tin Roof. 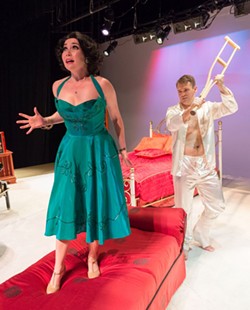 “When you need Liz Taylor, you call Maggie,” director David I.L. Poole chuckles. “This was the role she was born to play. And, the character’s name is Maggie!”

Cat on a Hot Tin Roof was Williams’ personal favorite of his works and is among his best-known, having won the Pulitzer Prize for Drama in 1955. Set on the 28,000-acre plantation of a cotton tycoon, Big Daddy (Michael Moynihan), in the 1950s, it’s the story of a family in crisis, tangled in a web of lies and high drama.

Maggie (Hart) fights isolation and loneliness as her husband, Big Daddy’s son Brick (Zachary Burke), falls deeper into alcoholism. As Maggie begs for the former football hero’s touch, the family harbors a secret: Big Daddy is dying of cancer on his birthday. Under the guise of keeping things pleasant and civil on a day of celebration, Big Daddy and his wife, Big Mama (Mickey Dodge) are under the guise that the patriarch was issued a clean bill of health. But greed lies at the heart of the hoax as family members eye Big Daddy’s inheritance.

“What an iconic play,” Poole marvels. “It’s set in the South, it has family dynamics, sexual tension, heat.”

There are a few versions of the play out there, and Collective Face has selected the 1974 version.

“We’re going to do the racier one,” says Poole. “We don’t shy away from that—that’s why we rated it ‘R.’ There is brief nudity, the content is stronger, there’s cursing...these roles are so challenging.”

Cat on a Hot Tin Roof is often compared to Shakespeare’s King Lear, as both plays tell the story of a father leaving his land and prosperity to a son. 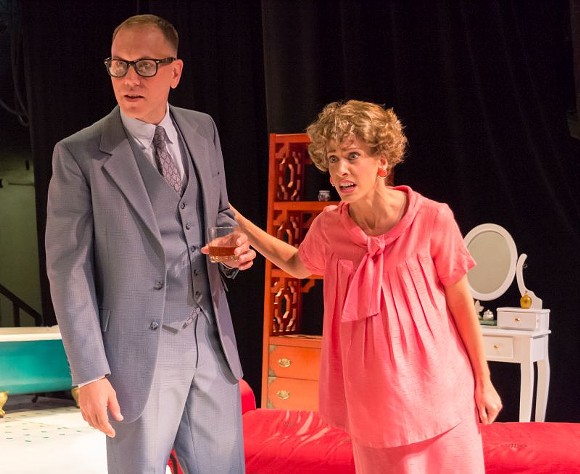 “It’s got that sort of grandeur to it,” Poole points out. “That’s what this play is about: grandeur and intimacy.”

Collective Face often finds set design inspiration in a show’s more abstract themes, and Cat is sure to feature a gorgeously presented stage.

On a trip to Louisiana last year, Poole decided to do some research and find inspiration.

“The play takes place on a plantation in the Mississippi Delta,” he says. “I had a trip to New Orleans—I stood in front of Tennessee Williams’ house!—but I really wanted to see what he was talking about. The plantations he mentions, they don’t really exist anymore because of erosion and storms. A lot of designers are looking at the plantations in Louisiana where they still have plantations.”

Poole visited as many as he could, searching for land reminiscent of Big Daddy’s grand estate.

Williams gave a lot of instruction in his scripts. In Cat on a Hot Tin Roof, the mansion’s décor is naturally quite grand and distinctly Southern, but the playwright also makes a note about there being an influence of the Far East. Most productions shy away from the note, but Poole was determined to embrace it.

“The transparent walls are made out of this material called gossamer,” he says. “When you light it from the front, it looks like a solid wall. From behind, it bleeds. You get to see what goes on in the hallway, and they kind of look like rice paper. They’re gold and shimmery rice paper walls with Chinese characters for ‘prosperity’ on them, so it looks like a gold, gilded wallpaper.”

The set is decadent with orangey Chinese reds, black lacquer, empress white, golds, and greens; 12-foot walls soar above the stage, which is slanted to imply that everything’s a little off-kilter and tilting toward the audience.

“It has our stamp on it!” Poole says proudly. “And the performances—I couldn’t have asked for a better cast. Mickey Dodge and Michael Moynihan have been in Savannah theatre for years and it was their time to come back and play these roles.”

Whenever he plans a season, the first question for Poole is, “Why this play now?” Yes, actors were dying to play the challenging roles Cat on a Hot Tin Roof has to offer, and yes, the season needed to end in splendid, classic fashion, but above all, Poole was amazed at the play’s lasting relevance.

“It really fits with what’s going on in the world,” he says. “Even though this play is 65 or 62 years old, it still resonates with us, even though it’s different times and a bit of a time capsule, it’s surprisingly fresh and surprisingly relevant. It’s seedy, it’s drama, it’s sexuality. It’s great theater.”