Earlier this fall, visiting a friend in the hospital, I was greeted in the central lobby of the contemporary building by familiar black and white photographs of live oaks arching over river banks, limbs reaching down toward the water’s smooth surface. Empty wooden rowboats pulled up onto the mud alongside the saltmarsh.

These images by Savannah photographer Jack Leigh were a welcomed sight, a flash of recognition grounding me to home in an environment that otherwise could have been Anywhere USA.

Many Savannahians know the Jack Leigh story—starting his photography career in the early 1970’s after formal instruction at University of Georgia, his reputation growing over the decades for capturing the essence of the often unseen South. The success of Leigh’s 1993 photo on the cover of “the book” — Midnight in the Garden of Good and Evil — led circuitously to the opening of the Jack Leigh Gallery on the corner of Oglethorpe Avenue and Abercorn Street.

Originally Leigh’s studio, the low-ceilinged nook with its wall of windows served as exhibit space for the work of Leigh and for a team of protégés, some of whom staffed the gallery. When Leigh died in 2004, the gallery continued as he wished it to, under the direction of gallery manager Susan Laney and master printer Ben Beasley.

In those years, the gallery has continued to sell Leigh’s work and to represent artists trained or apprenticed by him, including Laney, Beasley, and Savannah native Lisa M. Robinson, who first took photography from Leigh while in high school.

For Jack Leigh Gallery, 2007 has been “times three the best financial year we’ve ever had,” said Laney last week, in a breather from her preparation for the gallery’s last show, which runs December 1 through 14. “We’d rather go out on top.”

The exhibit space is closing at the end of the year, but to label this show as “final” seems to be a misnomer.

For starters, the gallery is sponsoring a lecture at the Jepson this Thursday by Robinson, to launch Snowbound, her first book of photography. “It was Jack who recognized that this body of work would comprise my first book,” said Robinson last week. “In February 2003 I showed the images to Jack and Susan [Laney]. He wrote on a piece of paper that morning, ‘Snowbound. Photographs by Lisa Robinson.’”

“With the gallery wanting to do something with the book, it was an obvious beginning point for the tour for me, it represents the culmination of the project in a really appropriate way,” she said.

The gallery’s closing show will present new work as well, including Polaroids Leigh shot throughout his career that have not been publicly exhibited before. Some work printed by Leigh will be exhibited, as well as the first of Leigh’s images to be reproduced by Craig Stevens using carbon pigment technology, representing the new direction of the Jack Leigh archive, as it heads away from darkroom printing. New and archival work by Laney, Beasley, Robinson and other Leigh-represented artists round out the offerings of the gallery exhibit.

“There are things still developing. We continue to work on the website and on placing Jack’s work in museums and collections,” says Laney. “Some major museums are interested in the archive. We’re not rushing into any major decisions.”

When Laney says “we” she refers to a small board of advisors that includes people integrally involved in Leigh’s work and life for the past 15 years. In addition to the advisory board, “the girls are very interested in what’s going to happen with his work,” referring to Leigh’s daughters, Jessica Miller, 19, and Gracie Leigh, 16.

For the past year or so, Jessica has helped out in the gallery with Laney, particularly in the past month in preparation for leaving the gallery space.

During the last years of his life, Leigh and his family lived upstairs.

“I remember my littler sister and I would come down here for lectures on Tuesday nights,” said Jessica. “We would throw in our little two cents. We’d peek out from the back and say ‘tell them about the part where....’ My sister would draw pictures and occasionally people would buy them.”

“It’s bittersweet,” said Jessica. “It’s good because I know that closing will allow more time to set up an archive, which is what Jack really wanted to happen. It’s really hard for that to be done without Susan’s full attention.”

“The closing of the gallery is a very sad moment in some ways but in other ways it’s a wonderful celebration, it means his work is finding a place in a broader spectrum,” said Robinson.

“So many people have come in and said ‘this is so sad,’ but it’s really not. It’s just time,” said Laney. “It just felt like Jack was up there saying ‘it’s time to close up and move on to the next chapter.’” 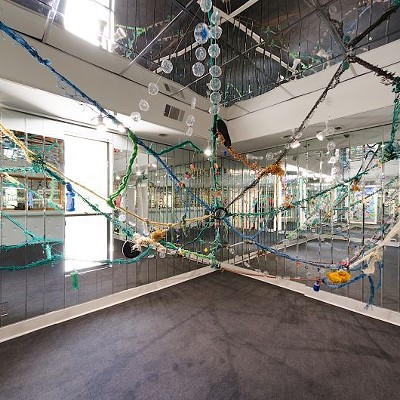