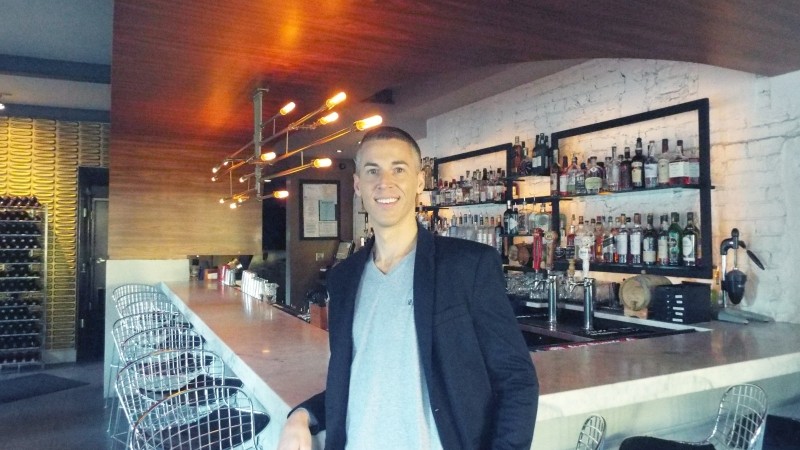 So his choice of guilty pleasures might surprise you.

“I’m a big fan of Waffle House,” he says. “Regardless of the sleek, fashion and modern, from age three until 17 or 18, you would most likely find me in a tobacco field, my dad bringing me a honey bun and a Gatorade.”

This horse-riding Glennville boy has wandered far from home. But he’s still connected to the farm—through his tables. And he still rides horses—both as an award-winning equestrian and as a jockey of that most challenging beast, the restaurant industry.

“It taught me patience,” he says of his first restaurant job, waiting tables at a Ruby Tuesday. “You’re dealing with people’s emotions when they come to eat. You have to be their best friend and talk to them while trying to get a tip from them.”

He got tips of a different kind while studying fashion at the Savannah College of Art and Design. Once the college brought longtime Vogue editor André Leon Talley to town.

Intent on seeing the style-maker, Durrence got tipped to his whereabouts, knocked on his door and talked his way into a brief meeting. He landed an internship the next day.

“That was the kick start to getting to New York City,” he says.

Fortunately for us, Durrence couldn’t stand his Big Apple jobs. They weren’t creative enough. He was a step on someone else’s ladder. Like an old song said, “Nice guys get washed away like the snow and the rain.”

Donna Balish of Bistro Savannah called him up while the young man was driving out of New York on his way back home. She offered him a restaurant management job. And Savannah’s gastronomical universe has been expanding ever since.

“It’s all in the details,” he says of managing restaurants. “This is a detail-oriented business from the way that the server looks to the way they point a table to the way the silverware is replaced. Those are all critical elements.”

Everything critical? That would drive me insane! But then again, I’ll obsess over a single word for an hour. So maybe we’re both crazy in different fields.

“Everything that you see and touch in the restaurant... is a constant evolution of creativity,” he says. “So much time, energy and work goes into that.”

So, in addition to great chefs, Durrence employs a “creative director” at his restaurant group, Daniel Reed Hospitality. And you can scratch your head at that title all you want.

But just like this wordsmith’s little tricks might pass you by unnoticed, a restaurant’s menu fonts, tables and chairs, buzz words and more are all statements of a kind.

“We try to have a point of view,” he says. “It’s a very important thing in business.”

The man’s every move is analyzed twice to Sunday by the frenzied dining press and those instant delirium makers with their fancy phones. So no, I don’t scratch my head.

I think about his discipline with horses, his boldness with Talley, his finesse with fashion and those honey buns.  And, like many others, I wait for his next, much rumored, move.

“We are very patient,” he says. “When the next Daniel Reed Hospitality concept is put out there for people to talk about, we feel like it’ll be talked about in a positive way.”

Believe me, it’ll be covered. But not necessarily smothered. Like certain hash browns.