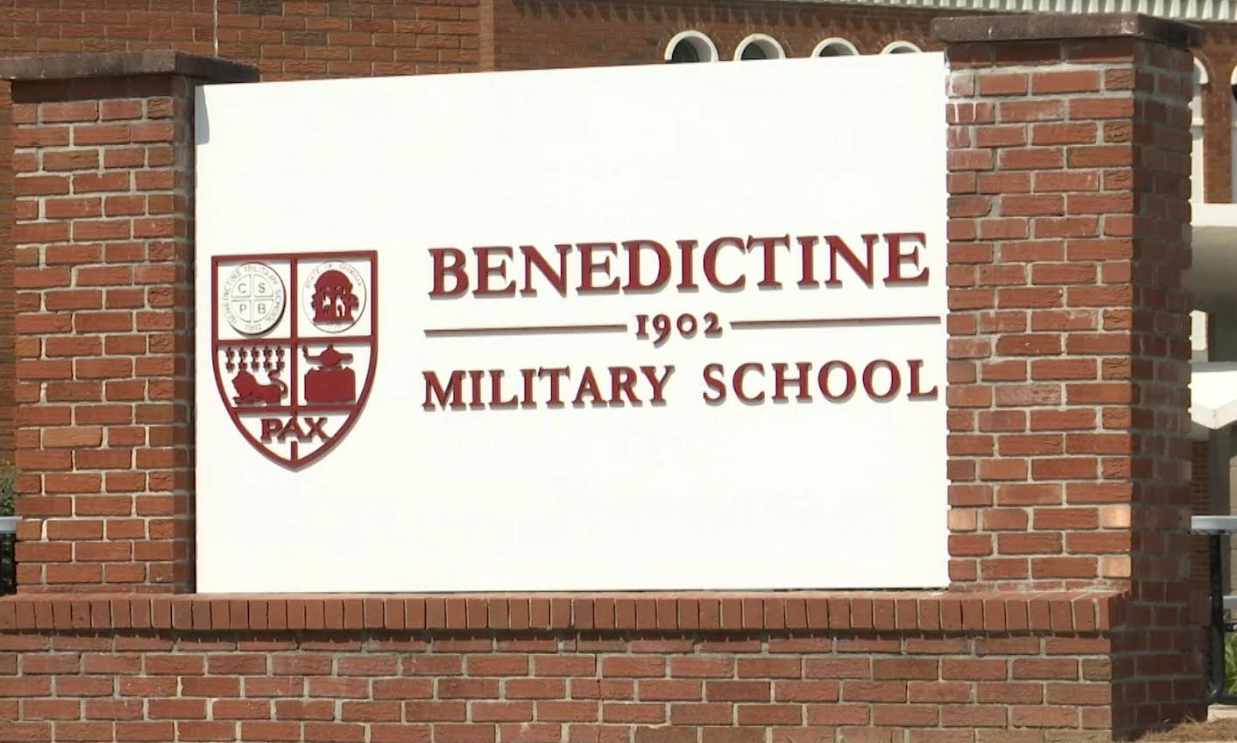 Last week, a boys basketball game between Savannah Christian and Savannah Country Day went down to the wire, ultimately being decided by a game-winning shot with under 30 seconds to play.

The host Hornets won the game, 48-45. But it wasn’t the close contest, or the result which made this game different. The significance of Tuesday, January 10 was provided by a third school’s student section present in Demere Gymnasium that evening. A group of roughly 40 Benedictine Cadet students decided to attend the game in mass to essentially chant and cheer against both teams on the court.

I wasn’t at the game. So, I won’t be claiming to know anything about the evening for certain. But I can tell you what I’ve pieced together from talking to people in the gym that night, and people who were  involved in the immediate fallout.

After the region 3-3A contest concluded, an allegation from SCPS assistant basketball coach Jasen Cheatham was posted on his Twitter. In the series of since-deleted tweets, Cheatham alleged that the Benedictine students met members of his Raider basketball team outside of Demere Gym, while the Raiders took the walk from their bench, and out through the gym’s rear, left, exit doors towards the visitor’s locker room.

Just outside those exit doors, tweeted Cheatham, was when the BC contingent used [a racial slur] against SCPS players. He also went on to tweet that physical altercations took place between Raider players and BC students. There was also the allegation of BC students spitting on Raider coaches once they arrived through the doors, just a few minutes after their players exited.

“Never in my life have I ever experienced such blatant racism,” said Cheatham in the first of several tweets posted just an hour after the game’s conclusion. “A BC student section with over 40 kids ran outside and started barking and calling my players [racial slur], trying to jump them, spitting on me and another (SCPS) coach.”

Those are strong allegations. And the tweets were deleted, which is relevant, but not significant in this case. It isn’t a retraction.

So, let’s begin here: Unless we receive video or audio evidence that the “[racial slur]” word was used, or we see saliva was slung, or punches were thrown or that a “jumping” was incoming … Unless any of that happens; The truth of this will forever remain somewhere in the middle of fact and fiction.

Alas, we do have some hard, solid facts to share:

“The administration is aware of an afterschool incident which transpired earlier this week. We are conducting a full investigation and will respond in a way that is consistent with Benedictine Military School’s mission,” said Dr. Jacob Horne, Benedictine’s Principal, through a press release statement on January 11.

Savannah Christian’s Head of School Jeff Plunk, also through a statement, said: “Sadly, in the world in which we live today, we must take matters of this type very seriously. At Savannah Christian Preparatory School, the safety and security of our students and our community is of the utmost importance.

“We are working with the appropriate authorities to support the ongoing investigation into this matter, and we are partnering with them to ensure situations of this type do not occur in the future.”

It has served the school’s brand and public image pretty well from what I can tell. Handle it internally at BC? Well then, you’ve essentially just handled it externally as well. That’s the precedent, at least. So who could blame BC for doing it their way. It works like a charm.

After the “incident” began receiving public attention last week (courtesy of reporting from WTOC’s Alyssa Jackson and WSAV’s Brian Gallagher), Benedictine was asked if they had any updates on what they’ve found through their investigation.

Their new statement was more of the same, old rhetoric. The formula is tried and true.

“In a unified effort today, the administration, faculty, staff, and Benedictine monks met for 25 minutes with each class in the Stephens Lecture Hall to reiterate the expectations of a Benedictine Cadet,” the January 11 statement says. “Teachers, coaches, and administrators spoke passionately, emphasizing our core values: Character, Spirituality, Purpose, and Brotherhood. We believe the message was well received, and our Cadets will move forward in a way that upholds the high standards of our school.”

Is this just too much to ask for?

With allegations of racism aimed directly at its students, Benedictine chose to speak “passionately” to its students. They chose to “reiterate” the same, old message. And they went about their business. The ole reliable.

What kind of game is this? Say what you mean. For once, say it straight, acknowledge the external citizens beyond the gates of Benedictine could have core values too. And just … you know … do it the normal way, maybe?

Benedictine beat Burke County earlier Tuesday night at home in a 6:30 game. The student section at the Cadet game was unusually small in size that evening.

“(BC administration and faculty) were mad because before that … Well, nobody showed up to our game,” a Benedictine student, who was not at either game Tuesday night, told me in summary of the BC class-by-class scolding on Wednesday.

“I don’t think (the BC students at the SCDS/SCPS game) did anything that bad. I don’t think most of us (students) care about it honestly.”

Maybe the passion wasn’t quite there after all?

One of the referees in the game told me what he thought, recalling seeing (and hearing) the arrival of “The 40” Cadets shortly after the game had tipped off.

“They came into the gym – it was at least 40 of them – kind of like a military march,” said the referee this week in a conversation with me. “They were holding up some signs or a banner or something. But they walked in and you couldn’t miss them.”

So, not only did the BC student contingent choose to go to a game having nothing to do with them. They decided to make it all about them. Chanting “Back-To-Back” in militaristic unison to reference the BC state football championships in 2021 and 2022, the Cadets were there to make a scene.

Making a scene is one thing. Making a mockery is quite another. Causing physical feuds outside of the gym (racist remarks or not) is absolutely ridiculous.

Wilson exchanged emails with me this week to discuss how Country Day – the proverbial third wheel in this whole ordeal – is handling the aftermath.

“I spoke with the heads of both BC and Savannah Christian the next day to debrief what happened at and after the game,” said Wilson, who was in the gym for the game. “I think we are all in agreement to strongly discourage, and maybe even prohibit, large groups of students from our schools from attending games in which their schools aren't competing.

“Going forward, (SCDS) does not plan on allowing a large group of students from another school to attend a game (at Country Day) unless their school is playing in it.”

In Country Day’s defense, that kind of rule probably never was even considered. Because what group of students would spend time going through all that trouble, just to create all that trouble? Well, here we are.

Three phone calls and two messages left from me, to Nelson, were asking for clarity on her investigation’s aim. Those efforts were not returned on Tuesday or Wednesday of this week.

One of the Benedictine students dismissed from BC in the aftermath of this is, and stay with me here, an aspiring rapper.

His name on SoundCloud is Supreme Johnson, and his “Savannah Christian Diss Track” leaked almost immediately after that fix-all meeting with the monks. The song is all about the incident, complete with lyrics naming SCPS students and former students by name.

Some of the lyrics were too much for Benedictine to ignore. And that’s saying something.

Here’s something. What about Savannah Country Day in all of this? Surely, they are being involved since they were the school hosting the thing. Nope. And don’t call me Shirley.

As of Tuesday, January 17, Wilson told me that he had yet to be asked about the incident, by anyone of significance.

“We have not been contacted by any authorities about the game.”

Let’s get it straight: All of this happens at Country Day. In their gym, and outside of it. The event was hosted at their school, under their watch. And yet still, nobody has come asking questions. Nobody receiving anything beyond a perfectly crafted press statement and a diss track.

Meetings were held, decisions made, then internal investigations launched. The students – the kids – had lives altered with expulsions and suspensions on the BC side. The SCPS team won’t ever forget what happened, no matter what actually happened.

But something clearly happened. Something significant.

These schools don’t act like this in response to things that don’t matter. Sadly, something will happen again. Maybe this year, maybe next. But unless all parties involved in this (local media, schools, coaches, students, teachers, parents and law enforcement) will decide that enough is enough, then the gossip and half truths and bitterness and outright fictions will be spread. And it’ll sow the next “after school incident.”