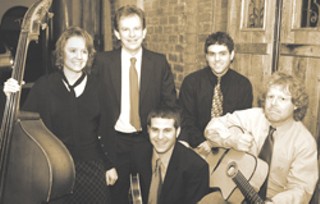 This year’s 26th Annual installment of our city’s beloved free music festival (sponsored in large part by the City of Savannah’s Department of Cultural Affairs) starts out with a bang, featuring three nights of concerts by regional artists.

Sunday night, from 5-9 p.m., that cozy bar/restaurant/listening room will feature a full evening of live music by a conglomeration of “the area’s finest musicians,” a full list of which had yet to be announced as of our press time. As this venue has recently been hosting popular, weekly jam sessions at which seasoned pros welcomed enthusiastic newcomers to the stage, it’s not unreasonable to imagine that some of that impromptu spirit may find its way into this lengthy set.

Monday night, from 8-11 p.m., veteran area trap drummer Eric Vaughn takes the stage at Kokopelli’s, to lead an eponymous combo that may include such towering talents as bassist George Scheck (whom Vaughn has gigged with before).

Now, if you’ve read for years in Connect about Savannah’s own 7-string guitar ace Howard Paul, but have yet to catch him in live performance, you’ll have your chance this Tuesday from 8 pm till 11 pm when his Howard Paul Trio plays the aforementioned Kokopelli’s. In addition to being a top-notch musician in his own right, Paul is a sought after sideman and duo partner who often accompanies such internationally-famed jazz headliners as Jimmy Bruno and Bucky Pizzarelli. No word on who’ll round out the lineup of his trio this time around, but in the past it has not been uncommon to catch him abetted by the likes of bassist Ben Tucker, saxman and flutist Randall Reese and drummer Billy Hoffman.

While these three nights of live music are all certainly worth attending, it should be noted that on Wednesday the 26th, the Savannah Jazz Festival is branching out of its usual environment in a big way, and heading South. That is to say, it’s heading Southside.

For what may I believe may be the first time in the history of this festival (and if I’m wrong, I’m sure some kind soul will write in to correct me), The Coastal Jazz Society organizers are taking it on the road, so to speak, in hopes of attracting an audience reluctant to make the trek to its normal stomping grounds of the downtown area.

This triple bill of outstanding local and national artists is divided thusly: an opening 7 p.m. set by The Skyelite Jazz Band, followed by One Leg Up at 8:15 p.m., and ending with The Ben Tucker Trio featuring Lynn Roberts at 9:30 p.m.

Formed in 1992 at the Savannah Arts Academy by Dr. John Bradley and Michael Hutchinson (and originally known as the BlueLight Jazz Band), The SJB has become one of the most well-known and celebrated high school jazz ensembles in the United States. They tour extensively, and have appeared everywhere from Orlando, Fl. to San Francisco, Ca. and from China to Great Britain. Additionally, former SJB members are regularly awarded music scholarships to leading universities and conservatories in the nation.

Asheville, N.C.’s One Leg Up is one of the leading exponents of so-called “Gypsy Jazz” on the scene today. Inspired by the ground-breaking work of famed guitarist Django Reinhardt, who —along with violinist Stéphane Grappelli— developed this upbeat and sensual form of percussionless acoustic string, woodwind and brass jazz at the Hot Club of Paris in the mid-1930s. Their lineup includes standup bass, violin, guitar, mandolin, clarinet and tenor sax.

And finally — bassist and composer Ben Tucker is recognized as one of the most prominent jazz figures in Savannah. A celebrated composer of more than 300 original tunes (including his signature “Comin’ Home Baby,” which was a hit for Mel Tormé and —more recently— Michale Buble, and “Devilette,” cut by Dexter Gordon) this bassist has been named Best Jazz Musician so often in Connect’s annual Readers Poll that we have jokingly thought of retiring the category. Musically, Ben has always surrounded himself with the cream of the crop, so his set should be top-notch no matter who’s in the spotlight with him.

Again, all these events are completely free and open to the public. For more information, or to view the festival’s complete schedule (including upcoming outdoor shows in Forsyth Park), check out www.savannahjazzfestival.org.