Image from “Clouds at Sunset” series at Cedar House Gallery

We arranged to meet three months later to discuss her first solo show to be held this Friday and Saturday night at Cedar House Gallery.

Formerly a sales rep for a national physical therapy equipment supplies company and now doing their social media, Fream lives and works in her compact cozy house in the Gordonston neighborhood. She seems to be in a contemplative mood... Her job situation is changing… She is turning forty in January.

“My dad has this quote: ‘every day of your life, you lay down a dot, but only later in life can you look back and connect them.’”

The connecting dots or thread in her life, Fream feels, is her creativity. “My soul is just dead if I’m not in a job that is creative. Looking back, I was drawing a lot, and then being creative in soccer coming up with different passes and plays.”

While she loved art classes, she never considered studying art in college, and because of her phenomenal soccer skills was awarded a sports scholarship to the University of San Francisco. When the coach resigned at the last minute, she ended up attending Georgia Southern for a year before transferring to Kennesaw State where they were just starting their first women’s soccer team.

Fream says, “We lost one game our first year and the next year, 2003, we became the NCAA Division II Women’s Soccer National Championship team.” Captaining the Owls for three years is one of her proudest achievements. Today, that would lead to a professional soccer career, but back then, there was no women’s league, and so, armed with a degree in communications and public relations with a minor in marketing, she took a job with a PR agency in Manhattan.

Having grown up in the small town of Hendersonville, Tennessee, Fream laughs and says, “I had a quarter-life-crisis moving from Kennesaw, Georgia to Manhattan! Right around then was when Oprah was telling everyone to pursue their life’s purpose (I’m still trying to figure that out), and I took it seriously and started on a path of wondering how I could do the most good. I thought I could do it with Nike’s soccer division and took a job with them in Oregon as a blogger and soccer club rep.”

Fream’s dream job of promoting soccer to young girls and women for Nike ended abruptly after an incident in 2008.

She says, “I have a dream to help the YMCA in particular, but also Boys and Girls Clubs, Special Olympics, and others. I’ve played at the Y, I’ve coached at the Y, and I’ve figured out a way to give people free products based on purchasing. I would love to see all these girls get new uniforms and cleats that are nicer than the guys’ jerseys. I not only want girls to play soccer, but I also want to elevate them. No more making fun of them.”

Despite the circumstances around her leaving her job, “I think there is a possibility one day that Nike will implement my idea.”

Fream explains that, despite the pain of reliving the memories in “Perspective,” something was urging her to tell her story and she likens it to the voice she sometimes hears telling her “to get out, right now, and take this photo. It’s almost a divine thing.”

Similarly, Fream says, “I love telling other people’s stories. I’m obsessed with perspective - how you see something is so different from how I see it. I’m making a book right now.”

Fream’s Humans blogs are an ongoing passion, but she categorizes them as distinct from her art: beautiful, large scale color photographs illuminated from within. Hard to label, she says, “I’ve settled on calling myself a Lowcountry photographer and light artist.”

We go outside to Fream’s spacious outdoor yard and garage where her illuminated artwork is assembled and stored. Images of cloudscapes are almost magically lit and can darken or lighten to a warm glow through the turning of a dial.

Similarly, her “Savannah Moments” photographs, which include such iconic images as Wormsloe’s avenue of oaks, a Tybee sunset, and the cobblestones of Factor’s Walk, shift perspective through her use of light.

Explaining why she feels called to work with light, Fream says, “I think looking back I went through a seasonal depression living in Portland. I love the sunlight. That was one of the reasons why I moved here.” Despite two recent melanoma surgeries, she has no regrets about returning to Georgia. By moving from Atlanta to Savannah two years ago, she lowered her mortgage payment by downsizing, found a slower pace of life, has less travel, created space to make her art, and has more time with Holly, a timid and loveable Chihuahua rescued from a horrendous life as a breeding bitch in a puppy mill.

To achieve the luminosity in her images, Fream custom builds each piece to order. Patrons choose their image, size, a black or aluminum frame, and the location for the power cord. Dimmable units come with a remote control allowing them to switch off the light altogether or achieve multiple moods with various degrees of lighting. An image of oak trees in Lafayette Square looks like a sepia tone photograph when turned off, but when lit, it glows and almost comes to life. “I’m obsessed with perspective shifts!” she says.

The show at Cedar House is in collaboration with Fream’s friend Matt Woods who will help her vision be realized through a totally immersive experience…Imagine walking through a downtown square under moss draped oak trees as you view the “Savannah Moment” images and picture being on a Savannah rooftop terrace as you view the “Clouds at Sunset” collection. Truly, artwork that comes to life by light.

If you miss this weekend’s show (but please don’t!), four vertical pieces from Fream’s “Savannah Moments” collection will be displayed outside the Chatham Ballroom at the Savannah Convention Center throughout 2023.

“Perspective” is on view during First Friday, December 2 from 6-9pm and on Saturday, December 3 from 1-6pm at Cedar House Gallery, 122 E. 36th Street. Find out more at jessiefreamart.com and on Instagram @jessie_fream_art. Follow her Humans of Savannah Instagram account @humans_of_Savannah 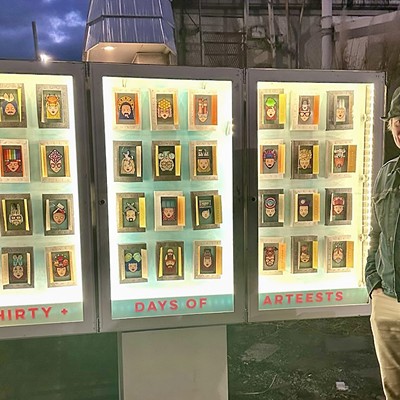