ANY conversation about the great Savannah writer Conrad Aiken usually begins and ends with his parent’s 1901 murder-suicide.

I know this because I start many of those conversations.

As a tour guide, I take visitors by Aiken’s former homes on Oglethorpe Avenue and his grave at Bonaventure Cemetery.

And as a radio host and writer, I occasionally make his work my work.

But my Aiken stories always involve two gunshots and an 11-year-old boy who descends the stairs to discover the bloody bodies of his mother and father, a sight that colored his life and shaped his writing.

I often wonder what Aiken, who died in 1973, would think of this presentation.

After all, such talk occurred within his lifetime.

“It annoyed him like hell,” says Joseph Killorin, a close friend of Aiken, a retired Armstrong professor and a great contributor to Aiken scholarship. “What his parents gave to him was an urge to write.” 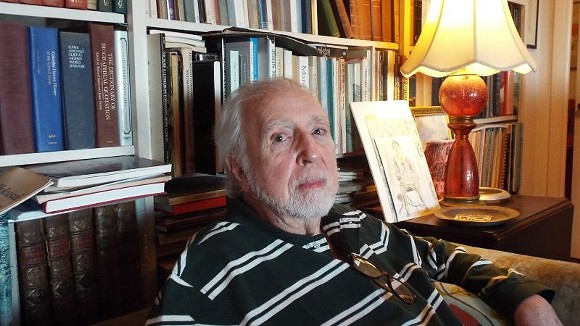 The fact that anyone alive today still remembers chumming around with a man born in 1889 is amazing itself.

I sought Killorin to clear up doubts I had about a writer rapidly becoming one of my favorites with each new story and poem I read.

Was he depressed? Was he mad? You certainly might get that impression from his work.

Indeed, his most popular short story, “Silent Snow, Secret Snow,” is just about the closest thing to a description of depression that I’ve read.

“He never was [mentally ill] but he always thought he might become so,” Killorin says, referring to madness in particular. “He thought it was inherited.”

But didn’t he try to commit suicide?

“Yes, but that wasn’t out of madness,” he says. “That was out of despair at a certain moment. Despair to Conrad came chiefly when a love affair was on the rocks.”

In that case, his second marriage.

Aiken apparently just wanted to try something (death) that he’d always wondered about. Thankfully, the man wondered about serious subjects (in print and in his own mind) until a heart attack took him at age 84.

And Aiken does come across as serious (a bit like me, I’m afraid).

That’s why I wanted to hear about his playful side. How did he let loose?

“He liked fast driving,” Killorin says. “I was always terribly afraid that I was going to throw him into the windshield. But he loved it.”

Killorin was a young academic when he met the waning writer. A dean, he built the English department when Armstrong moved from downtown to the Southside.

“We sat by the river, ate hot dogs and drank martinis,” he says. “He loved canned corned beef hash.”

They talked deeply, regularly (three or four times a week) and unhurriedly, the kind of conversation hard to imagine in the handheld-distraction era.

“He became my best friend,” he says. “After all, in Brewster [Massachusetts, Aiken’s summer home], he had Edmund Wilson and God knows who all either living there or coming to see him regularly. But in Savannah, he had Joe Killorin!”

Of course, Killorin is more than Aiken’s friend. Former students still remember him fondly. He served Armstrong for 40 years, retiring in 1988.

And I’m sure I’m selling him short, as I do Aiken.

But like Aiken, I’m sure Killorin forgives me. Indeed, I hope if I’m still around at age 90 and 42 years removed from a close friend that I have a chance to repeat his words:

“He meant the world to me,” he says. “I still miss him everyday.”