John Goodman: The man and the movies 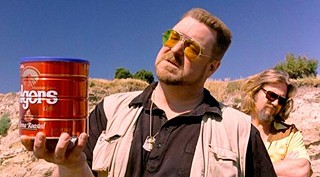 One of the most recognizable character actors working today, John Goodman might also be the busiest — this week, three of his films are in Savannah theaters, including Ben Affleck’s box office smash Argo.

“When I saw it,” Goodman says of Argo, “I was on the edge of my seat. And I already knew what was gonna happen.”

Goodman will be at the Savannah Film Festival Oct. 28 to attend a screening of the new Denzel Washington thriller Flight, in which he has a pivotal role.

Already in the can for this prodigious talent: The Internship, with Will Ferrell, Owen Wilson and Vince Vaughn, and the Coen Brothers’ Inside Llewyn Davis.

It’ll be the fifth Coen film for Goodman, whose bombastic comic presence in The Big Lebowski and O Brother Where Art Thou were instrumental in making those wonderfully quirky movies so ... well, wonderfully quirky.

A native of St. Louis, Goodman first hit the public radar as Pap Finn in the original Broadway production of the Roger Miller musical Big River.

For a lot of people, he’ll always be Dan Conner, Roseanne Barr’s loveable lug of a husband on the long–running TV sitcom Roseanne.

We caught up with him at the end of a long day of interviews (called a “press junket”) for Flight.

Was doing Argo a no–brainer?

John Goodman: He called me in to that office that they had, and we sat down and shot the shit about baseball and stuff for a while. Then we got down to brass tacks. He was extremely prepared. Then Alan Arkin fell into the deal, and that was even better because I’ve really been a longtime fan, ever since I first saw him in The Russians Are Coming.

At what point do you consider a film a success?

John Goodman: You gotta blow off all the Oscar buzz talk and all that shit. Because that’s none of my business. That’s for people on Entertainment Tonight, Extra and all that stuff. That’s how they make their living, out of doing the red carpet stuff. So you just discount that stuff.

It’s how it makes me feel. If I get a good time doing it, and by good time I mean was it satisfying? That’s the only criterion I can have.

Do you ever get to the point where you see the finished film and go “This isn’t what we made”?

In a long career, I guess they can’t all be great. To you, what’s the difference between a “paycheck film” and something you get really excited about? I mean, you work like a son of a bitch.

John Goodman: Well, there’s been times where I didn’t work like a son of a bitch. When I had a lot of down time. At that point you get — well, I did — kind of desperate that maybe you’re not gonna work again. So you wind up taking whatever comes along.

I’ve heard you say you’d like to do another TV series ...

John Goodman: Yeah, you get to stay in one place for a while. You show up and work with people that you get to know. It becomes kind of like a family. Although in the case of the last experience, it was a highly dysfunctional family ... but we grew to love each other. You show up every day and you see the same people, it gets to be fun.

Didn’t you and Roseanne recently do a series pilot together?

John Goodman: Yeah, we did a pilot for NBC. It was an idea that she had. But the times aren’t so good right now so she set it in a trailer park with a bunch of down–and–outers in Arizona. Then a family comes along that just lost everything in the stock market crash, or bubble, or whatever the hell it was, and how they adjust. It was great to be back with her. We had a lot of fun. But it wasn’t fun enough for NBC!

You’ve got another Coen Brothers movie coming up. Why is your chemistry so good with them?

John Goodman: I don’t know; I don’t know anything about chemistry. I know that I like ‘em, I like what’s on the page, I like the way they write and the way they think. They always make me laugh. To me, they’re terribly entertaining and interesting. You never know quite where things are gonna go with them.

John Goodman: Yeah, the first night I was on the set for Inside Llewyn Davis, I was gettin’ a makeup test. And Frannie, Joel’s wife — who won an Oscar for Fargo  — showed up with some soup for the boys. I thought that was cool.

What do you get hit up with most in airports?

John Goodman: Lebowski, it’s usually Lebowski. I used to get “Yabba Dabba Do,” but not so much any more, which is a relief.

And it’s always welcome. People yell out “Shomer Shabbos” or “Shut the fuck up, Donny” or something like that.

Of all the Coen films, why do you think Lebowski is the one that’s resonated so much?

John Goodman: I think the fact that the Dude Abides. (laughing). We all have an inner Dude. I don’t know. I think it’s the writing. It’s just a hodge–podge of mystery and goofiness.

You’ve been talking all day. Let me ask you, John — do you hate press junkets?

John Goodman: Yeah, because I’m no good at ‘em. And I just gotta make up shit to keep tap–dancin.’ People ask you questions, and then they shut off ... it’s like they’re interrogating you. I’m just no good at it. I’m not clever. I’m lousy at cocktail parties. I don’t chit–chat well. It’s just uncomfortable, but apparently they can’t make a movie now without having this shit.

You’ve got another Monsters Inc. film for Pixar coming up.

John Goodman: Yeah! I go back in two weeks and work with Billy (Crystal), which is great because usually they put us in a room by ourselves ... I don’t want to whine about shit, but it’s hard work. I mean, you’ve got to throw everything you’ve got physically into these voices to make ‘em live. And then you gotta do it over and over and over again, so that the directors have something to pick and choose from. I always feel like I’m doing it wrong, because they always want it again, three more times.

But when I’m working with Billy, the energy in the room just takes off. You don’t know where he’s gonna go. ‘Cause he’s so phenomenally clever. It’s just great to listen to him, and just hang on and see where you can go with it. The energy multiplies by 10.

Monsters Inc. was huge. Do you get little kids recognizing Sulley’s voice?

John Goodman: Not unless their parents shove ‘em at me, and say “This is Sulley.” Then they can hear it in the voice, and that’s pretty cool.

That’s kinda why I got into it in the first place, for my daughter. I used to bring cartoons home — and I’d try to bring good ones, like old Warner Brothers cartoons. And she got hooked on ‘em. Spielberg actually did a cartoon and asked me to be a part of it. Steven read all the lines, and I read the lines back to him. And that was really neat. She got a kick out of it.

John Goodman: Yeah, the last one I did was three years ago, I did Waiting for Godot on Broadway with Nathan Lane and Bill Irwin.

Never could understand that play, but God bless you.

John Goodman: Well, yeah, I don’t think you’re supposed to. It has an effect.

Is that something you enjoy too, because you’re in the same place?

John Goodman: It’s not just because of that, there’s an immediate response that you don’t get (with film) ... and the audience becomes part of the performance. I want to get back. I’ve got one artificial knee, and I need to get another one before I can get back up and stand around for a couple hours yelling at people onstage.

Before we got started, you mentioned that you’d been in Savannah once?

John Goodman: I was doing a bus and truck theater show, and we played there. But I don’t remember much of it. I knew it was supposed to be really cool and everything, but we didn’t have time. Back on the bus. Leave.

Anything cool to say about Flight?

John Goodman: I’d never seen a movie like it before. There’s a lot of ambiguous characters in it who think they’re doing the right thing. It makes for fascinating watching. Especially Denzel, he’s really compelling.

Flight screens at 7 p.m. Sunday, Oct. 28 at the Trustees Theater, with John Goodman in attendance.