A singer-songwriter who speaks from his heart 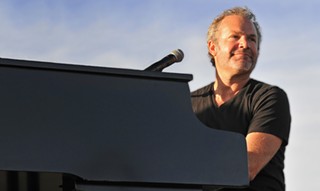 Often known by his stage name, Five for Fighting, singer-songwriter John Ondrasik rose to stardom over two decades ago when his Grammy nominated song “Superman (It’s Not Easy)” became an anthem of healing for the United States following the 9/11 attacks.

Since his breakthrough, he has written songs that dive into life’s deepest subjects; love, family, war, morality, and change, and the singer-songwriter isn’t afraid to speak from his heart. In addition to “Superman (It’s Not Easy)”, his other chart topping hits include “100 Years,” “The Riddle,” “Chances,” and “Easy Tonight.”

Born in Los Angeles, Ondrasik grew up in a musical family and says he began dabbling with the piano at the young age of three.

“My mom was a classical pianist and ended up teaching piano for almost 50 years,” Ondrasik explained. “She started me very young and she was wise enough to quickly send me to her friend to take piano lessons because it’s very hard to take lessons from your parents.”

Ondrasked added that he continued to play piano throughout his youth, but, with the support of his parents, he quit in his young teens to explore other activities.

“Once I was a young teenager and I had kind of the basics and fundamentals of piano my parents let me quit to explore other things….ride my skateboard, play basketball, etc. And that’s when I started writing songs because it wasn’t something that I had to do.”

Ondrasik says that when it comes to his songwriting, he feels that it’s evolved with his life.

“You can look at my records and see my life evolve, particularly when I had kids,” he said. “When you have kids it becomes less about you. My early records are the rock records…they’re about girls and love and cars and things that young people think about. But when you have children you start looking at the world through their eyes. You don’t write ‘100 years’ without two kids sitting on your lap.”

Recently, Ondrasik released a new song dedicated to Ukrainian President Zelenskyy titled “Can One Man Save the World?”

The new track highlights the superhuman strength and determination that the comedian-turned-president and now defender of democracy has displayed in the face of the recent Russian invasion.

“I think it’s hard not to be inspired by Zelensky and the Ukrainian people standing up to Putin’s atrocities,” Ondrasik stated. “The song is not ‘One Man Will Save the World’ it’s ‘Can One Man Save the World?’ because I think that question is still to be answered and we don’t know how history is going to write the rest of this chapter. So, as a songwriter, how can you really not write about those things?”

In addition to releasing his newest song, Ondrasik will be hitting the road and making a stop at District Live at Plant Riverside District.

“One reason I am doing this tour and coming to Savannah is because for years I’ve said ‘I’m going to go to Florida, I’m going to go to Georgia, I’m going to go back to Birmingham,’ but I’ve never followed through with it,” he said. “Coming out of the pandemic…I think our perspectives have changed. In some ways, we have learned really what does matter. You see people re-evaluating their lives and understanding that 100 year sentiment of ‘this is what we got and there are no guarantees.’”

Backing Ondrasik on the District Live stage will be a string quartet, a configuration he’s toured with on and off for the past decade.

“I’m really excited to bring the string quartet,” he explained. “Ten years ago, I started doing these symphony shows which, for me, was just kind of a rebirth. Playing with the quartet really allows me to pull songs from my catalog that I wouldn’t play with the rock band and they add a new dynamic to my songs that maybe people have heard me play before.”

Five for Fighting will perform at District Live on Tues., May 10 at 8:30 p.m. For more information or to purchase tickets visit plantriverside.com/district-live