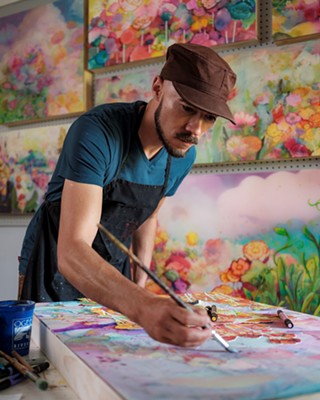 Carmen Aguirre, Director of the Grand Bohemian Gallery at The Mansion on Forsyth Park, is passionate about featuring local Savannah artists.

During October, she will show José Ray’s “Organic Ephemera” with an opening reception this Thursday, Sept., 30 from 5 to 8:00 p.m.

Aguirre first discovered Ray on social media and via his children’s books displayed at Leslie Lovell’s Roots Up Gallery.

Under the pen name José Lucio, he has written and illustrated “Heave Ho!” (2014), “Free Rain,” (2017), and “Morty and the Moon” (2019) which respectively feature an earth worm, six chickens and a friendly bat; though Ray tells me he’s probably done with children’s books unless he finds an agent to help with the marketing and communication with book festivals (anyone ?!)

Aguirre then attended his show at Sulfur Studios and immediately asked him to be part of the Grand Bohemian’s “Savannah Series.”

Now included in her permanent stable of artists, Ray is indebted to Aguirre for regular art sales during quarantine.

For many, his previous show at the Grand Bohemian Gallery was the last we attended before the City of Savannah shut down in March of last year. During the past 18 months Aguirre sold his work to locals and to out-of-town hotel guests alike.

“I’m incredibly grateful that show happened. I might have been in the breadline without it!” Ray jokes. In fact, the pandemic was good for Ray in many ways. Not only did he consistently sell work, but he and wife Maggie—an actor, singer, dancer, and teacher—bought a home in midtown where he set up a spacious studio in the front of the house, focused on producing more work, and on perfecting the sealants he uses to protect his pieces after completion.

Despite being creative as a child growing up in a blue collar family in Hutchinson, KS, Ray was not exposed to much of an art scene and never considered college to be in his future,

“I actually remember feeling as a kid of 10 or 12 that you have to work a job that you may not like, that breaks you down physically or emotionally, you have a family, you struggle to survive. You die. Man, that sucks.”

After high school he moved to Lawrence, KS, which he describes as “a much cooler city,” played in bands, was around art, and eventually knew he needed to get out of the 9-5 drudgery and find some meaning.

He started taking classes at a community college in Kansas City where his professors recognized and nurtured his artistic ability and encouraged him to attend art school.

Now in his mid-twenties, he looked at several and, “after living in the Midwest my whole life, a warm climate and the coast played a big role in choosing SCAD!”

Ray graduated in Painting and Illustration in 2011.

The next years saw Ray teaching children at Scribble Art Studio, and helping many students prepare portfolios of work for Garrison, Savannah Arts Academy and SCAD.

“That was a really good job because it allowed me to get reacquainted with so many media. I hadn’t used coloring pencils since grade school. I had to teach these kids how to use chalk pastels, oil pastels, watercolor, etc. and I had to learn it myself all over again.”

Supplementing that income, Ray took on illustration and graphic design jobs, did some installation work, embarked on several murals (locally, you can see his work in the Starland Mural Project and at 40th and Drayton next to Atwell’s Art & Frame), and continued his love affair with vinyl as a highly acclaimed local DJ. All the while, he would be constantly sketching and drawing while trying to carve out time to work on his gallery pieces.

Ray meets me in his in-home studio, wearing, of course, his signature Fidel cap and joyful smile. Incredibly youthful and energetic, his enthusiastic nature seems to spill over into his mixed media floral paintings which feature a profusion of color, bursts of flowers—both imagined and real—and rainbows of psychedelic patterns and shapes.

Ray views this work as the outgrowth of many years of self-doubt and experimentation.

“Even now, there’s a lot of drawing and doodling in them,” he says. “Before I was using watercolor as a base and then using ink, colored pencils, markers and gouache on top. Now I am using more of a collage technique—something that I’ve always been interested in since my punk rock days in high school. I’ve spent a lot of time figuring out the best media to make my work.”

He starts by affixing watercolor paper to panels, then paints abstract forms and adds more and more layers of collage.

“Then I take a gesso and a palette knife to start building up textures and forms.”

Finally, he adds several coats of varnish to make the painting UV-resistant. Gone are the super high gloss finishes of his past work, replaced by a softer more satin finish which still permits the viewer to see the complexity of the underlying layers.

Ray explains, “My paintings are floral—but they are very much drawn. I like to start with some recognizable flowers, but I often get in the flow and just start doodling. I grew up on Saturday morning cartoons and I love that early animation. Sometimes the work is more realistic and sometimes more cartoon like. As a Gemini, I like that dichotomy.”

He walks his dogs down Savannah’s alleys and appreciates the abundant untamed vegetation, how things are running wild and twisting together.

“Sometimes the paintings have a theme (similar flowers or a particular color palette) but for the most part they are fairly spontaneous.” Ray relates them to his DJ-ing.

“I like to add in more bizarre stuff to introduce it to people. So, I may seamlessly mix in some obscure French techno music with Madonna or Beyonce. It’s the same idea here. You may say, ‘Oh, look at the pretty flowers,’ but I can add in the weird stuff I like—the more abstract elements, the doodling, the manic all-over-the place stuff. What separates my work and makes it unique is all those disparate mediums coming together.”

Ray still deejays (catch him most Saturdays in Starland Yard, most Fridays at the Peacock Lounge, and at private events), but today is in the fortunate position of being a fulltime artist.

Wife Maggie, whom he met in philosophy class at SCAD, appreciates being able to experience his creativity so intimately,

“The studio being in our home allows me to see the process of it. And I think the years that he put into working and giving back to our community are paying off. He’s in a really good place. He’s getting the love back now.”

Come share the love – and the joy – by experiencing “Organic Ephemera.”

“Organic Ephemera,” new work by José Ray, opens Thurs., Sept. 30 with an artist reception from 5 to 8:00 p.m. at Grand Bohemian Gallery at The Mansion on Forsyth Park. For more information visit kesslercollection.com or call 912.721.5007 and find José Ray at Joséray.com or on Instagram @Joséraysay