“Been In The Storm So Long”

DECEMBER 21, 1864 is one of the most important days in Savannah’s history. Do you know why?

It’s now commemorated as Jubilee Freedom Day by the Center for Jubilee, headed by Patt Gunn and Rosalyn Rouse of Underground Tours.

Now in its fifth year, Jubilee Freedom Day is a celebration of healing and forgiveness. Gunn, Rouse, and Alexis Javier of Sulfur Studios and Emergent Savannah have come together to create a special weekend.

“AJ is the master behind the artists coming together,” says Gunn. “They call them the Jubilee Freedom Day Artist Collective, but I think they’re artists of social change.”

“As we got a little closer to the event, I reached out to friends and artists and activists—we call them artivists,” shares Javier.

“For the most part, everyone has responded with enthusiasm and excitement. Everyone has their own knowledge or understanding about what Jubilee Freedom Day is. Some don’t, and they’re learning even more. Because we have all these different people coming together for this, everyone is being heard. For me, it’s allowing for more nuance and complexity of this topic to come to light, and I would like to believe we’re all finding some sort of larger understanding of this. It’s larger than we may have thought before.”

The artivists were taken down to the Cluskey Storage Vaults, where it’s believed enslaved people were kept.

“The Cluskey Storage has not been definitely proved as a place where slaves were held, but the city has put a mandate that they’re going to continue to investigate,” says Gunn. “We felt the spirit down there. The artivists came down and they felt it, too. When you don’t acknowledge truth, that’s what happens.”

Like the artivists, Gunn hopes that the attendees will feel the spirit and be encouraged to make change.

“I think with all the excitement and good vibes going across this city, one thing we’d like to see come out of this is have these be tools for advocacy,” says Gunn. “Visitors go back home and say, ‘What’s my project? How do I take something that’s negative and pull together and change that thing, heal and redress it? We have to begin to have people on the Earth that will do that. We’re looking for the abolitionists.” 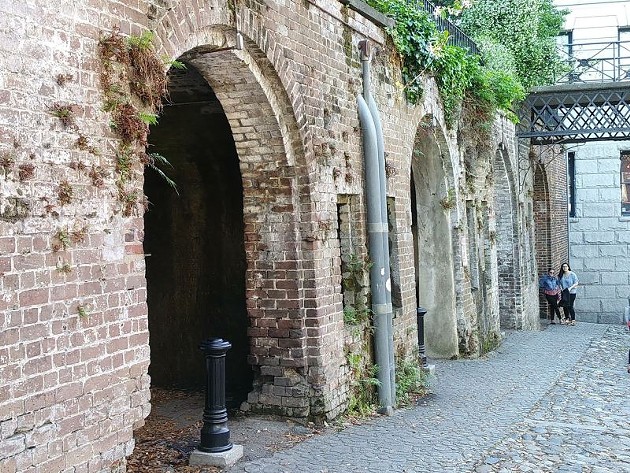 The Cluskey Storage Vaults, where it's suspected slaves were housed.

“We find them all the time on our tour,” adds Rouse. “They don’t want to leave Savannah. They say, ‘What can we do? What can we do to help Underground Tours?’ Once they get it, they feel it.”

Friday’s event begins with the ringing of church bells and goes into a formal ceremony with libations and prayers before breaking off into the main events.

“We’ll have visual arts, spoken word, freedom songs, and something that’s so touching: the reading of the manifest project we did last year called Say My Name,” says Gunn. “It’s a reading arranged on the manifest of slaves, and we compiled probably over 100,000 names from manifest lists. Our goal is to read 10,000—we have many more, but that’s our goal.”

The reading is sure to be emotionally stirring, especially on the heels of the art exhibit Thursday.

Eric Saul and Dr. Amy Fiske curated “Been In the Storm So Long,” a collection of photographs that show the history of slavery. The graphic exhibition is intended for mature audiences only.

“We want people to see what actually happened, and we want to stir up ideas about how we can get past this atrocity,” says Gunn. “The exhibit will be a culmination of visuals in terms of portraits, but it’s blended with freedom songs. If you look at a portrait and put the freedom songs with it, and hear freedom songs of forgiveness, you can take them through that process a lot easier.”

Gunn and Rouse note that their Underground Tours don’t happen without freedom songs.

“Walking downtown and hearing the story about slaves is very hard,” says Gunn. “You can’t just show p and then release people .We take them on a journey through slavery.”

Last year, Saul and Fiske brought an exhibition called “The American Abolitionist,” which was very well-received. That exhibition is currently at the Beach Institute, with a reception scheduled for Dec. 19. (For more, turn to page 35.)

“Last year, people came to the exhibit and they were saying, ‘Is John Brown here? I can’t wait to see John Brown. What about Sojourner Truth?’” shares Gunn. “It was magical.”

“I started to look in their eyes,” adds Rouse. “When I looked in the eyes of those abolitionists, I felt like they were looking at me, saying, ‘Ros, don’t forget.’”

Gunn hopes that the event stirs up the need for change in Savannah.

“Our charge is to redact the history of Savannah and place markers in spaces we think are sacred,” she says. “From the Cluskey Storage where we believe slaves dwelled to the unmarked burial sites to the waterways, we have identified over 15 places where there should be markers, because we have zero markers. As we go into the 400 years of slavery, it’s time to begin the work.”