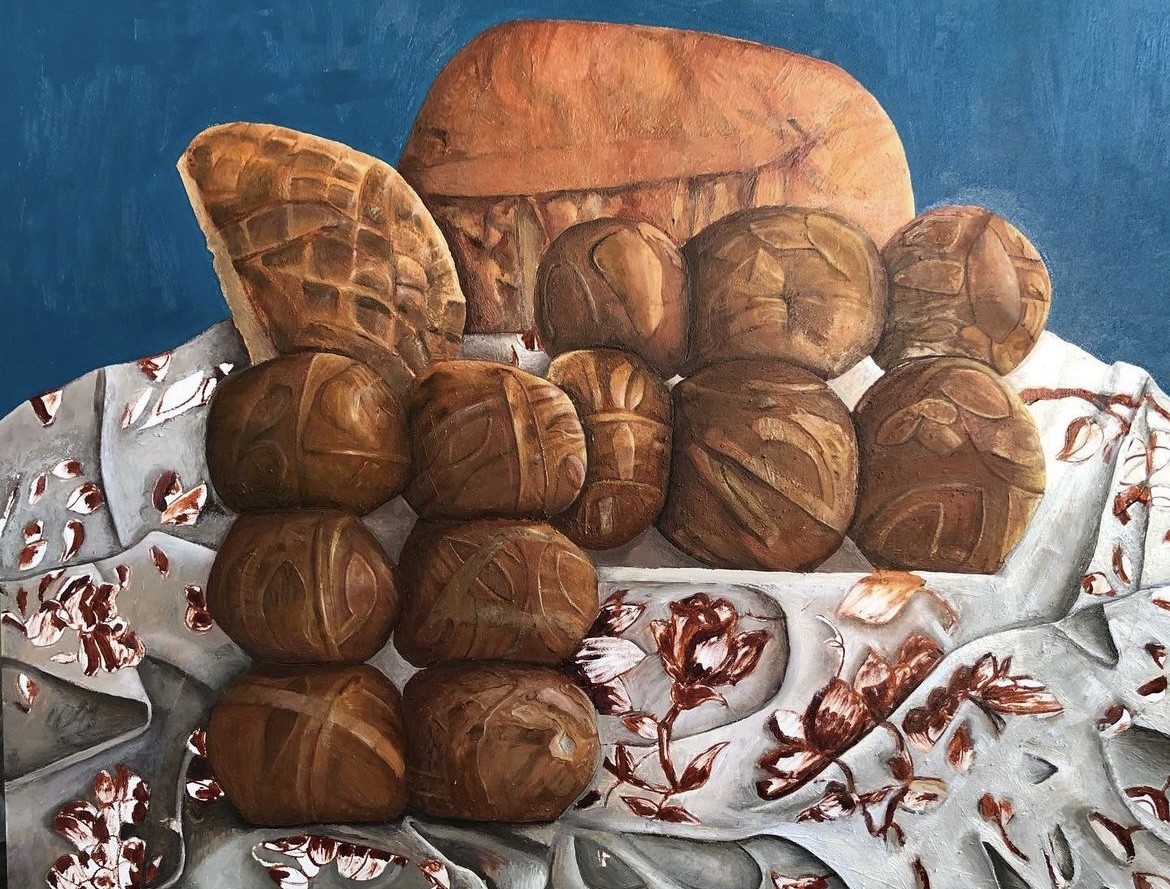 “Bread,” oil on board

Julia and Bob Christian’s gallery on Taylor Street is a feast for the eyes. Open to the public three days a week, the second-floor parlor of their brick rowhouse lights up like a jewel in the morning sunlight, and everywhere I look are intricately decorated surfaces…tables, chairs, urns, cut-out figures, planters, baskets, picture frames, the walls themselves, and, of course, the many, many paintings.

I am here to meet the rather reticent Julia Christian about her artwork, but I soon realize that one can’t really talk about Julia’s work without talking about her husband Bob’s. After more than forty years, their art careers and styles are inextricably bound together. 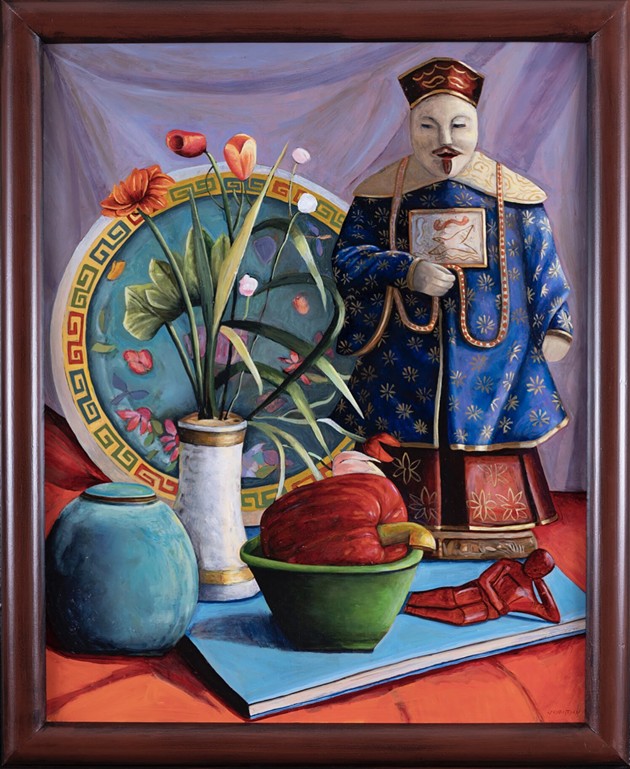 “Red Pepper and Blue Figure,” oil on board

We start at the beginning. Was Julia always artistic? “Yes,” she responds, “You know when you are a young child.” The daughter of an architect, her earliest memories in Albany, Georgia are of painting Joan Walsh Anglund coloring books her mother would buy her. When I ask about her time earning a BFA in Painting and Drawing at The Univ. of Georgia, she laughs and says, “I was just thinking about that this morning. When I think of UGA, I think about the B-52’s. I had the very first party where they played. Fred wanted to have a dance party.”

What a claim to fame! She refers to Fred Schneider and the iconic Athens new wave band formed in 1976, currently on their farewell tour. “The last stop is Athens. We’ve got to go.”

Husband Bob, also from Albany, attended the Atlanta College of Art, and the pair moved to New York City where Julia says, “I worked for an ‘art factory.’ The owner had a six-store factory where they made frames on one floor and I oversaw producing abstract paintings, mostly for the interior design industry. We had a ball doing it.” She goes on, “When Bob and I finally got married, we came to Savannah and stayed downtown in the Hyatt. Got off the elevator, and lo and behold, there’s one of my paintings. It was the funniest thing.”

While Julia was mass producing bold abstracts (which still occasionally come to auction), Bob was training under the decorative painter and antiques dealer John Rosselli on 72nd Street. In 1982, he relocated his own decorative arts business to Savannah where he and Julia went on to raise three sons. It is unspoken, but Julia must have borne the brunt of the raising as Bob’s assignments take him all over the country for seven to ten days at a time, while she runs the business side of things, and creates and shows her own work. 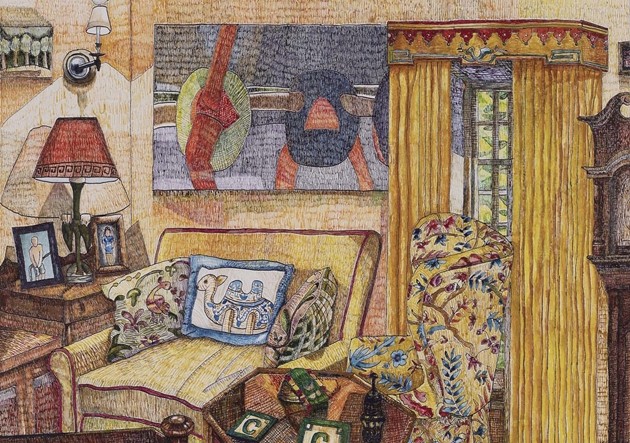 While there are several of Julia’s pieces in the main gallery, we must walk outside to the ground floor level to see the lion’s share of her output. The street level gallery is filled to overflowing with her impeccably framed pencil figure studies from models (“We used to have a figure drawing group that met at the Jepson”), painted portraits, her time-consuming pen and ink and colored pencil still lifes, and colorful oil paintings of dogs and people portrayed in her uniquely volumetric, and often humorous style. Interestingly, she still displays several loose abstract pieces and at least one figure drawing created during her time at UGA.

Julia is currently represented by a gallery in Dallas and by the talented Carmen Aguirre, director of the Gallery at the Mansion, who has made it her mission to highlight the work of Savannah artists. Of course, Julia makes sales through foot traffic to the gallery and via her website, but says, “We mostly work with interior designers.” It seems that over the years they have found out about Bob’s work through Julia and found out about Julia’s work through Bob’s. As I said, their careers are inextricably intertwined…Even their styles seem interwoven. In Julia’s paintings , planes are flattened in a Post Impressionistic fashion and there is often a stylized and decorative element. For example, I look at a recent still life of beautifully rendered loaves of bread sitting upon a fabric that she subsequently embellished with a rich russet floral design. When I ask her about similarities to Bob’s decorative work, she says, “Well, you’d almost expect that after forty years. He’s my greatest influence.”

Naturally introverted, humble, and deeply private, Julia appears to feel that good art requires no dialogue. She says she likes to paint figures and seems to effortlessly pull compositions from her imagination, “putting together paintings that hopefully people will enjoy.”

She does, however, mention that her latest painting – a still life of a ham – was influenced by her love for Gauguin’s 1889 “The Ham” which hangs in the Phillips Collection in DC. She is excited to see the Alex Katz Retrospective at the Guggenheim this month and the “Edward Hopper’s New York” show at the Whitney Museum of American Art.

Always creative, always producing work, Julia has a cluttered drafting table in the back of her downstairs gallery where she draws two days a week. “And I paint upstairs four days a week.” We go to the top floor of the house to take a look - a bright, well-lit room contains several works in progress, her new ham still life, her multiple tubes of oil paints and her enormous easel, which already holds the beginning sketches of her next painting.

Back in the main gallery, we sit at a faux marquetry round table in the gallery and flip thought the huge binders of magazine articles from such publications as Veranda Magazine, Elle Decor and Architectural Digest. They feature Bob’s work with the country’s leading interior designers - commissioned murals, floors, ceilings, furniture, and canvases - all showcasing what Julia refers to as his “innate sense and depth of style.”

She is particularly proud that one of his murals is featured on the cover of At Home in the South: Interior Design Reimagined, the recently published, and first, hardcover book by Veranda Magazine.

Julia says, “We just work all the time. Anything with paint, we have done!” As an artistic couple, they are as one, though, of course, each partner’s works stand on their own merit…

After UGA Julia continued her studies at The Arts Students League of New York, The National Academy School of Fine Arts, and The Pennsylvania Academy of Fine Arts. She is a member of Allied Artists of American, Inc., National Association of Women Artists, Inc., and Women’s Caucus for Art of Georgia, and her work has been featured in numerous national publications.

Her creative output is prodigious, and the caliber of her painting is truly museum worthy.

When I ask about the future, Julia says, “You don’t retire when you’re passionate about what you do. You just do it for as long as you can.”

Julia Christian: A woman of exceptional artistic ability deserving of our attention.

Find out more at Juliachristianart.com and follow her on Instagram.com/juliachristianart. See her work at the Gallery at the Mansion, 700 Drayton Street, and at Bob Christian Decorative Art and Julia Christian Gallery, 114 W. Taylor Street, open on Tuesdays, Thursdays, and Fridays. 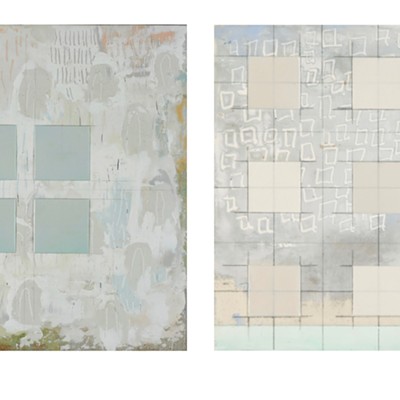 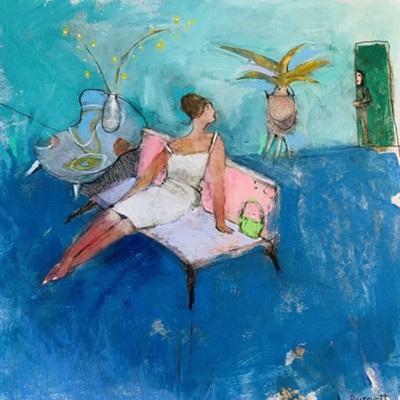