Julien Baker: ‘A girl in the boy’s club of guitarists’

Singer/songwriter on coming out, the music industry, and Jesus Christ

"IT WASN’T that I was just scared of my family," says Julien Baker. "I was truly, at the core, terrified of eternal damnation."

That’s Baker talking about coming out as gay at the age of 17. Obviously, that isn’t an easy thing to do in the Tennessee Bible Belt, where the wages of sin go well beyond death.

So when the young singer-songwriter broke the news to her father, and he responded by pulling a Bible down from the bookshelf, things weren’t looking so good.

“Before I came out to anybody, I was like a weirdo kid with the most bizarre clothes and haircuts and facial piercings,” said the now 20-year-old indie-pop phenom, who’s already racked up dozens of high-profile feature stories and played a much-acclaimed set at this year’s Newport Folk Festival. 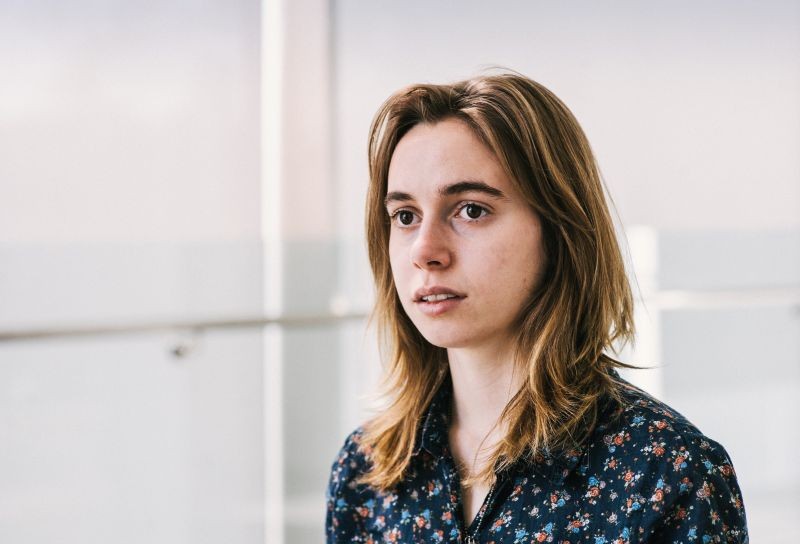 “So being gay would just be one more thing in an alternative community that virtually accepts everyone. But with my family it was a lot more intimidating.”

Baker’s fears turned out to be unwarranted. In fact, her father began showing her biblical passages that indicated she would not be going to hell. Her worship pastor’s response was no less surprising.

“I’m sitting there shaking, like ‘I have something to tell you, I have to be honest, I’m gay!’ And she just said, ‘So?’”

It’s easy to think that Julien Baker came out of nowhere, and by most record industry standards, she has. The Memphis native had released a couple of mostly overlooked recordings with her childhood alt-rock band, Forrister, in which she sang and played electric guitar.

But with last October’s release of her debut album, Sprained Ankle (it’s being re-released in March under Baker’s new label deal with Matador Records), she’s proven to be one of those artists for whom the word “elegiac” seems to have been invented.

The majority of the songs—written in her garage and recorded in just two days—are starkly minimalist.

For standout tracks like “Vessels,” Baker dials back the volume on her Telecaster guitar. Her voice, both musically and lyrically, is heart-wrenching but not hopeless, vulnerable but never weak. There are times when her music evokes the ethereal beauty of works by Jeff Buckley and Fairport Convention.

Lyrically, the title track’s opening line gives an indication of what’s to follow: “Wish I could write songs about anything other than death,” she sings, with what turns out be a trace of irony.

“There were several songwriters I met while I was in college at TSU [Tennessee State University],” recalled Baker, who comes across as much more cheerful and optimistic in conversation than her album might lead you to expect.

“We would send drafts of songs in progress back and forth to each other. I’d been working on yet another folk song about death, and I put that lyric in front of it and sent it to one of my good friends, James. It was sort of a joke about all our songs being sad, and then I thought, ‘Aw, it’s cheeky, but it’s also kind of true.”

Indeed, Sprained Ankle has no shortage of bleak images: The faint metronome of a pulse in the hospital setting of “Brittle Boned,” the limbs as black as cinder in “Funeral Pyre,” the car wrapped around the street lamp in “Blacktop.”

For most poetically inclined English majors—which Baker until recently was—morbid imagery can serve as a dramatic substitute for real-life experience. But in Baker’s songs, there are often back stories to justify them, as when she recounts the telephone-pole crash that led to “Blacktop.”

“I was still in high school and it was my first car ever,” she says.” “It was so bizarre, this pole collapsing onto my car and crushing it. But I think that whatever you’re dealing with—whether it’s a terrible car crash, or you have some kind of health trouble, or anything that makes you aware of your own mortality—it makes you want to examine what you’re doing with your life. Because you’re instantly aware of how precious it is.”

Baker formed her first band with drummer Matthew Gilliam, a childhood friend who still records with her to this day.

“He and I have been playing music together since before I could drive. I had to have my parents drop me off at his house,” remembers Baker.

“We were called The Star Killers, and then we got another guitarist and we changed our name to Forrister a couple years ago.”

Why Star Killers? “We were in high school,” she said, which would have been reason enough.

“And apparently Luke Skywalker’s name was originally supposed to be Luke Starkiller. So we just thought, ‘What a cool band name!’”

At the time, Baker was still eager to prove that she could rock as hard as any of her male counterparts.

“It sounds clichéd, but when you’re a girl in a boys’ club of guitarists, you want people to think that you know more than the chords G and C,” she said.

“So then you think it is necessary, or appropriate, to constantly be riffing like a Stevie Ray Vaughan blues solo. There’s one song called ‘Love Song Blues’ that our male guitarist sings, and I just do an idiotic solo, just trying to burn up the fretboard, so that I can prove, like, ‘I’m super-good at guitar. Look, guys. I promise!’”

Baker left that goal behind, although she’s still not 100 percent certain about where her music is heading.

“I’m trying to let the pendulum swing the other way, and to strip everything down, and see how little I can work with,” said the musician, Even so, she doesn’t rule out the possibility of experimenting with strings or more keyboards on future recordings.

“I want to find the right intersection between analytical and organic,” she said. “Sometimes I get very nervous that I’m boring the audience. But then I think about artists like Leonard Cohen, who can sing a six-minute song while just switching back and forth between two chords.”

“I identify as Christian,” said Baker. “I mean, I believe in Jesus Christ and the gospel, and that it’s true. But I think people miss what Christ is supposed to represent by using Christ as a platform to riot outside of abortion clinics, or be hateful to gay people or to African-Americans. I just think that Christ is the most complete representation of love I’ve ever seen in any philosophical forum, with a deity or not.”

And for that, Baker can credit her family, and her worship leader, and others who set an early example for her.

“I’ve been pretty fortunate to have people behaving with this grace and this acceptance, and not burning me at the stake,” she said. “I spent a lot of time alone, poring over scripture and, as I know now, probably misinterpreting it to be fire and brimstone, and ‘you’re going to hell.’ But no longer do I think that, which is why it’s so important for me to be open about those subjects.