The week of June 8, the Telfair hosts its annual Juneteenth program, featuring Jamaican attorney Miguel Lorne who will discuss a Savannah free preacher’s connection with the Caribbean.

WHEN President Abraham Lincoln signed the Emancipation Proclamation that granted freedom to America’s slaves in September of 1862, it was supposed to go into effect January 1, 1863.

Out on the westernmost outposts of the Civil War, however, no one got the memo for another two and a half years.

With sketchy communication channels and not enough Union troops to enforce the order even when it arrived, the slaves of Texas didn’t know they were free until Maj. Gen. Gordon Granger arrived in Galveston to announce the end of the war on June 19, 1965.

“The people of Texas are informed that, in accordance with a proclamation from the Executive of the United States, all slaves are free,” read Gordon from General Order No. 3.

“The freedmen are advised to remain quietly at their present homes and work for wages.”

Most chose not to heed that advice, tossing aside their tasks and spilling into the streets to sing and rejoice that the cruelty and inhumanity of slavery had finally come to an end. Their joy was so memorable that the date became an annual holiday known as “Juneteenth,” a new tradition for a people tentatively exercising autonomy for the first time.

Some headed back to the former Confederate states to seek out family members they’d been ripped away from, others headed north to start new lives. In many cases, they were met with difficulty and bigotry, but the memory of Juneteenth served as beacon of hope.

“Settling into these new areas as free men and women brought on new realities and the challenges of establishing a heretofore non-existent status for black people in America,” writes Cliff Robertson on Juneteenth.com.

“Recounting the memories of that great day in June of 1865 and its festivities would serve as motivation as well as a release from the growing pressures encountered in their new territory.”

Juneteenth celebrations waned in the early 1900s as new generations cleaved to Fourth of July to celebrate independence, but the Civil Rights Movement of the 1960s brought a renewed fervor in African American communities to commemorate the day their enslaved ancestors claimed their freedom.

Savannah’s Juneteenth traditions continue to follow the emphasis to educate about and promote African American culture and history through a variety of events that remind reminders of all that has been accomplished since the shackles fell.

Telfair Museums begins its annual Juneteeth program every year with libations poured on the steps of the Jepson Center to acknowledge those ancestors, followed by an afternoon of storytelling, song and interactive activities that bring history into the hands of all who attend. This year’s Free Family Day on Saturday, June 10 cedes the stage to the fast feet and rollicking rhythms of the Abeni Cultural Arts Performing Dance Studio, followed by the sonorous reverence of the Men of St. John “The Mighty Fortress” choir.

To connect Savannah’s history to the African diaspora, the Telfair will also welcome a special guest. Jamaican author, attorney and activist Miguel Lorne will deliver a lecture about Rev. George Liele, a former slave freed before the Revolutionary War who went on to become the first American missionary.

In “The Journey of Rev. George Liele: From Savannah Baptist to Rastafari,” Lorne will discuss how Liele, a gifted preacher, founded the First Bryan Baptist Church and the First African Baptist Church—both of which still exist downtown—before moving to Jamaica to do missionary work in 1782, where he helped lay the groundwork of the Rastafari faith. The lecture is free and open to the public. [NOTE: The June 8 lecture has been postponed due to travel issues and will be rescheduled] 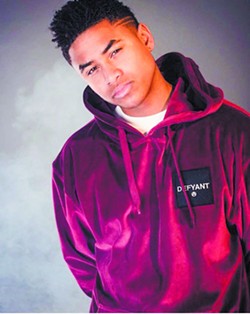 The following week on Saturday, June 17, the Juneteenth Festival at 38th Street Park will also link history to present day triumphs. Sponsored by the Daughters of Mary Magdalene, this homegrown celebration brings together local griots to recount the story of Juneteenth along with hip hop artist and actor Torion Sellers, who has under his belt a part in Barbershop 2: The Next Cut and a hit single, “Twerk Don’t Hurt.”

Toots for Books will be collecting good reads to donate at the family-oriented park picnic, and all attendees are encouraged to make a plate and eat for free. The outdoor atmosphere is casual and welcoming, meant to bring Juneteenth’s inspiring message to one of Savannah’s oldest African American neighborhoods.

“Our main focus is to always keep the Juneteenth Festival in the urban community because most of our people are living in the underserved community and need cultural events like [this],” explains Ivan Cohen, one the event organizers.

Later that Saturday, some of the local ordinary people who showed extraordinary courage during the Civil Rights era will be back at the beach. In 1960, Savannah icon and activist W.W. Law led a group of African American teenagers to Tybee Island to exercise their right to swim in the ocean. Over the next few years, a series of “wade-ins” became a hallmark of Savannah’s relatively peaceful protest actions, empowering a generation to claim their rights.

Some of those original waders will join the action group Tybee MLK to recreate this act of civil disobedience in honor of Juneteenth, starting from the North Beach Grill at 3pm. Retired Tybee city councilman Mallory Pearce will don his Abraham Lincoln hat and read the Emancipation Proclamation, tying together the end of slavery and the ongoing struggle for equality, dignity and liberty.

“It took the end of the war to turn the words into law.”

While the law of the land guarantees freedom for all, it is easy to forget that it wasn’t always so. Commemorating Juneteenth as an essential part of American history teaches us to remember.