Big walls don’t daunt Cierra Selby, who jumped at the chance to create a mural on a blank space behind the JEA

FORTY-THREE feet is a long way up.

But big walls don’t daunt Cierra Selby, who jumped at the chance to create a mural on a blank space behind the Jewish Educational Alliance on Abercorn last month.

Selby isn’t an artist, but that didn’t deter her, either. When the 24 year-old community activist learned the space was available after attending a recent JEA panel on non-profit partnerships for young professionals, she put the afternoon’s advice into action. Immediately.

“After the panel, I took a tour of the facility, and when we got outside near the basketball courts, [Administrative Director] Anna Berwitz kind of mentioned in passing that they’d always wanted a mural out there,” says Selby of the community center’s outbuildings.

Within days, Selby had recruited a painter, Danielle Gusby, as well as rallied volunteers and secured sponsorships for the project. Ladders were acquired, gallons of paint purchased.

A few short weeks after a community painting party that gathered more than 60 people to help color in Gusby’s vision, the 43’x35’ panorama is complete. What had been a dingy beige wall for decades now blooms with trees, bees, hearts, rainbows and a large book that pays tribute to the Jewish concept of “Tikkun Olam,” the “repairing of the world” through social action and justice.

“After the recent loss of my newborn, I’ve found that creating this mural has been very therapeutic for me,” wrote the artist in a statement.

“When presented with this opportunity, I figured what better way to mirror the amount of the generosity I’ve been shown than to do the same for a great cause in the community. The JEA offers so much to all walks of life, and it’s my hope that this mural will give back in the way they do every day.”

Established over a hundred years ago as a club for Savannah’s Jewish community, the JEA now serves as a cultural center, preschool, summer camp and vital hub for family and children’s services for the entire city.

“We are always looking to collaborate with other non-profits that have a need, and we emphasize service projects at our summer camps and afterschool programs,” says the JEA’s Berwitz.

“To have a non-profit identify a need that we have, well, it’s just been terrific.”

This isn’t the first time Selby has answered a community’s call for support with art. In 2014, she established the project Just Paint as a response to vandalism at White Bluff Elementary School, which left students and teachers with a terrible mess and sense of defeat. Selby enlisted several artists and volunteers as well as students to create a mural in the school cafeteria, where they would be reminded every day of their talents and how much good people can do when they gather together to help.

Using public art as a way to engage and unite citizens as well as provide local artists with a way to increase their exposure, Selby believes the impact of Just Paint comes from more than the murals.

“I create these projects because I want to change the way people think about volunteerism and community service,” she explains.

“When people think about community service, they often view it as something negative, relating to work that is court-appointed or a requirement for school. But there are endless possibilities to giving back and making your community a better place.”

Originally from New York, Selby graduated from Savannah Arts Academy and went on to earn a business and marketing degree from Clark Atlanta University. Knowing intuitively that the corporate route wasn’t for her, she returned to Savannah a few years ago to serve a year with AmeriCorps, the federal program that promotes civic involvement by way of various public service projects. That introduced her to local good works organizations like Hands On Savannah, which helped provided a grant for the paint for the JEA mural. 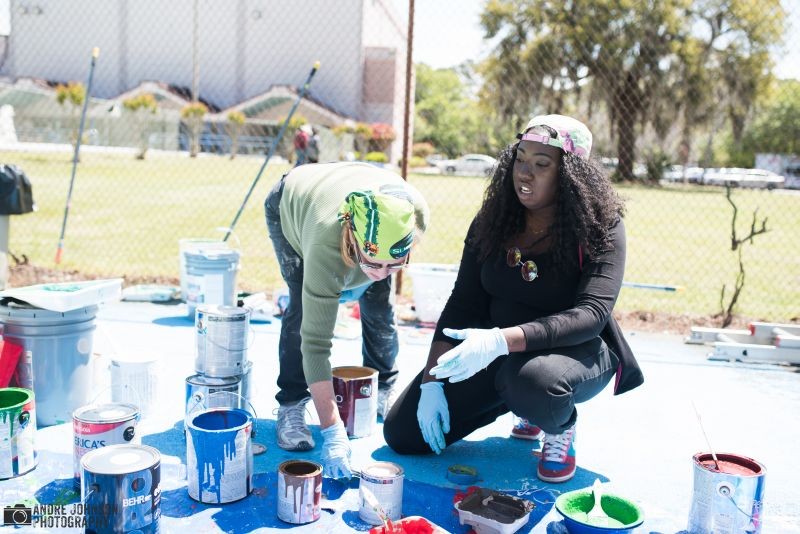 Hands On Savannah also connected her with legions of local volunteers looking for ways to give back—an important resource when she launched Just Paint.

“The purpose of the Just Paint project is to bring people together—kids, the elderly, local businesses and community members—for an interaction that reminds them how powerful it is to help others,” she says.

With two murals under her belt, Selby plans to organize more opportunities for Savannah to create public art together—though it might be a while until the next one. She’s leaving for New York this summer to attend a yearlong Master’s of Public Administration program that she hopes will fill her toolbox with even more skills and tips on how to inspire people with her message:

“Whatever talents you possess, there is something you could be doing to help the world around you, all while gaining a clearer understanding of your role in it.”