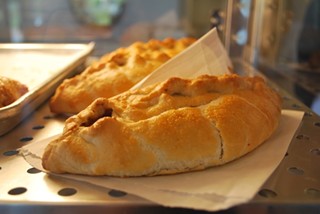 A Cornish Pasty makes a perfect lunch for down in the mines. Or, just at your desk.

Mention steak-and-kidney pie to a native Brit, and you can actually witness his or her mind go misty with longing.

This savory treat is ubiquitous in the United Kingdom but hard to find in the States, where we prefer our pies sweet and stuffed with fruit. But British palates living in the Lowcountry can now satisfy their hankering for a taste of home, thanks to Pie Society.

Tucked in a sunny corner of Pooler's Canal Street Plaza, the bakery opened in late February to an instant customer base of ex-pats working at Gulfstream and JCB. Word about Edward Wagstaff's fresh-baked goodies has gotten 'round, and the 25 year-old rises before dawn seven days a week to stock his shop with pies (both savory and sweet) as well as quiches, lasagnas, shortbread and other delights.

With the gentle reminder to "Keep Calm and Carry On" overlooking the clean, airy space, Wagstaff spends his time rolling out dough and preparing fillings while sales are taken care of by his business partner and mum, Gill. The mother and son had visited the area on vacation — *ahem*, holiday, rather — several times to visit one of Edward's siblings, a JCB employee, and found the lack of London fog a welcome revelation. The duo spent two years developing a business plan and navigating the visa process to open Pie Society near sunny Savannah and moved everything across the pond (including their 15- year-old Jack Russell terrier, Chalky) to start their new venture.

Working together has been less an exercise in quiet desperation than an excellent business decision for both mother and son.

"It's more of a friendship, really," says Edward of their easygoing partnership.

"I know how good his product is, so I had no worries about selling it," says Gill, a former business development manager for Alton Towers, the U.K.'s most popular theme park.

That's not just a mother's pride talking. One bite of Edward's Sausage & Apple roll is enough to have even the staunchest Southerner speaking with a Cockney accent: Crispy bits of pork sausage surrounded by warm apples wrapped in a flaky crust is a traditional snack back in Staffordshire, the Wagstaffs' native county.

"People seem surprised that we really are English," says Gill.

Other handheld items include pasties (pronounced "PAH-stees"), containing a variety of ingredients in a beautifully crafted pastry. The Cornish Pasty holds tender meat, carrots and peas and at $3.89, an affordable and satisfying lunch option, and the Cheese, Onion & Potato Pasty ($3.49) brings a hearty, rib-sticking goodness to vegetarian diets.

Let's talk dinner: Pie Society's full-size savory pies and oven bakes ($12.99-$15.99) can fill the bellies of at least four people, a nutritious and pleasing option (seriously, who doesn't like meat topped with mashed potatoes?) for busy families. The aforementioned Steak & Kidney Pie must be ordered in advance, but the Wagstaffs keep popular favorites such as Beef & Onion, Chicken & Thyme and Steak & Ale (made with a revolving selection of brown English beers) on the shelves. (Savory pies are also available in 1-2 person servings.)

Vegetarians will also find plenty for their tables, including a Vegetable Pie in cheese sauce and the Broccoli & Blue Cheese Quiche ($11.99.)

Lest we forget our love of sweet things, Pie Society provides a'plenty: The Apple and Mixed Berry Pie is as American as it gets (though Gill points out that there's no cinnamon, a British touch.) On the English side is the Bakewell Tart, a confection of raspberry jam and almonds, and a selection of lovely lemon meringues.

Every ingredient is sourced fresh, and nothing has ever seen the inside of a freezer. Take note, however, Pie Society sells out most every day of just about everything, so it's always a good idea to call ahead to place an order.

With at least a day's notice, Edward is also happy to accommodate special orders, especially from fellow Brits seeking a particular dish. He's had requests for Butter Pie, an onion-and-potato meal historically cooked up in the province of Lancashire for Catholics on non-meat eating days.

Recipes for meat pies date back to the 14th century, and each region that's been under the British Empire — including Australia and New Zealand — has its own provincial favorite.

How does such a young man become so adept at re-creating the flavors of a thousands-year-old culture? He began at 14, working at the local bakery on Sundays, peeling fruit and doing chores for a bit of pocket money.

"It sounds like I sent him out to work as a slave child," laughs Gill.

But Edward is quick to note that he has always loved baking, returning to it even after receiving a university degree in environmental management.

"I like doing things with my hands," he shrugs with characteristic English modesty. "Getting up early doesn't bother me."

The American flag and the Union Jack hang side by side at Pie Society, and while the Wagstaffs adore their new Southern home, their devotion to traditional fare of the U.K. and its people remains steadfast.

"That's it, I suppose, there's no modern twist," muses Edward. "These recipes have been handed down for generations." 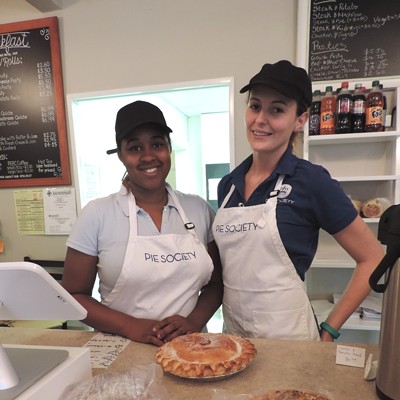