Keeping it 100: The 100 Black Men of Savannah support, encourage youth

For nearly twenty years, the 100 Black Men of Savannah has been committed to supporting our youth.

It’s a chapter of the nationwide 100 Black Men of America, founded in 1963 with the purpose of helping Black youth succeed.

Savannah’s chapter was founded in 1996, just six months after Charles L. Gordon attended the Million Man March in Washington, D.C. In that time, it’s expanded into 32 public schools in the area, from elementary to high school.

President Harold Oglesby learned about the group from a coworker and felt moved to join.

“He told me it was a focus on mentoring, and I was looking for something I could get involved in the community with. It seemed like a good fit for me,” says Oglesby. 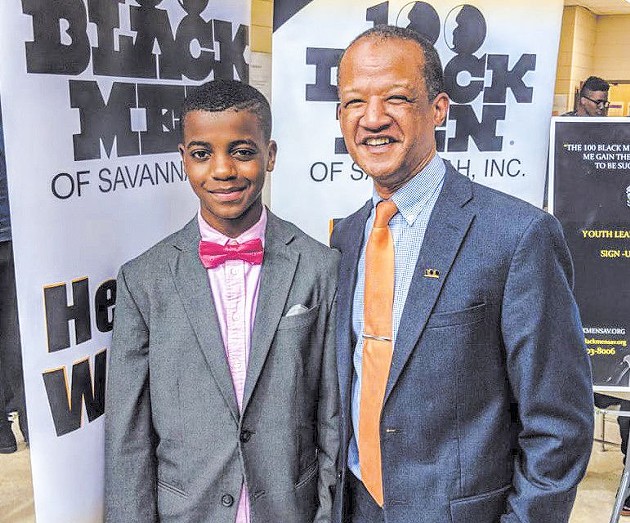 Harold Oglesby, right, is president of the 100 Black Men of Savannah.

The men of 100 Black Men of Savannah—which, Oglesby notes, currently number closer to 50—represent a wide swath of expertise, from lawyers to doctors to retired military personnel. The main requirement of a mentor is consistency.

“What we find is a lot of kids are used to being disappointed,” says Oglesby. “They’re used to someone telling them, ‘I’ll be there for you,’ and then they disappear. We don’t want to have that same relationship with any of our mentors. If they’re going to have a mentor, then we want them to be consistent.”

To achieve consistency, the group mentors through an organized curriculum called Mentoring the 100 Way, which favors group mentoring instead of one-on-one.

It’s easier for the group to reach more kids in a group setting, but depending on the kids’ needs, the mentors are also available for a more interpersonal relationship.

Most of the outreach that 100 Black Men of Savannah does is achieved through in-school mentoring. Guidance counselors choose students they think would benefit from the sessions, and parents can also ask for their kids to be included.

Oglesby with a young class.

The mentoring sessions occur weekly in about 32 of Savannah and Chatham County’s public schools, from elementary through high school. Two to three mentors lead the session, which takes place around lunch so as not to disrupt academic hours.

The sessions are very orderly: on the second session, the group elects its own officers, learn Robert’s Rules of Order, and wear dress shirts. Oglesby notes that in the first few weeks, the kids get teased for being dressed up, but by about the fourth week, kids are asking how they can join.

This puts the kids on an equal playing field, something that doesn’t always happen in the classroom.

“We never separate the kids. We have a kid with a 1.0 GPA next to a kid with a 4.2 GPA,” says Oglesby. “A lot of times, those kids with the 1.0 GPA were some of the smartest kids in school, but they’d have disciplinary actions, they’d be acting out. When you say there and talked to them, you’d figure out this kid has a lot more going on than probably anybody at the school knows. A lot of times, people get the misconception that all the kids we deal with are bad kids. Some of the kids have real life problems going on. The mentors take the kid off to the side and talk to them for a few minutes and figure out what in the world is going on.”

Oglesby shares the story of one kid who was 11 years old, but he looked like he was 18. As a result, everyone in his life treated him as if he were much older, which in turn caused him to act that way. The boy acted out in class and took his aggression out on his much smaller classmates.

During a mentoring session, two of the men took him to the side and, Oglesby recounts, “They gave him permission to be 11 years old.” When they talked to him about his dreams, they learned he wanted to be a football player, so they encouraged him to get his aggression out on the football field and to work hard in school so he could get to college and then the NFL.

Students of the Medical Camp.

“All of a sudden, this kid changed,” says Oglesby. “Teachers went to them and said, ‘What did you guys do with him?’ They said, ‘Nothing—we just talked to him and set some expectations.’ That kid turned into one of the leaders of his group.”

At its heart, that’s the power of 100 Black Men of Savannah: it sets up clear expectations for kids who may not have that otherwise.

An important part of the organization is the Collegiate 100, a group of college-aged men who also serve as mentors.

“Kids can relate to someone that’s more their age,” says Oglesby. “Guys with silver hair on their heads trying to talk to kids is different than when you’re coming to someone who just got out of high school.”

In addition to the Collegiate 100, the 100 Black Men of Savannah also offer the Wall Street Club, Court’s in Session, the Youth Leadership Academy, and summer camps.

But with school out of session and physical events at a standstill, the organization has been doing virtual mentoring sessions, called Saturday Real Talk Sessions, which is typically part of the Youth Leadership Academy.

At a recent session, Ahmaud Arbery was brought up, and the kids were emotional.

“We talked to them about it and provided support to them, and we told them we’d be talking about it again,” says Oglesby. “Before we could have our next session, we had the George Floyd incident, and these kids were on fire.”

As a way to help the kids get their frustration out, 100 Black Men of Savannah began the Express Yourself Contest, where the kids were invited to create art in any form.

“We were going to have a session specifically about the protests and the death, and then we decided to delay it a bit,” remembers Oglesby. “We had a separate meeting with our mentors to make sure we were all on the same page, and in the meantime, let’s let these kids vent and share their feelings so when we have our session, we know where they stand and what their thought processes are.”

The many entries for the contest were thoughtful and impressive, and it serves to highlight why the 100 Black Men of Savannah is such an important group for, and positive influence on, our youth.

“It’s important no matter what’s going on in the world. Our kids are our future,” says Oglesby. “We want these kids to have the best life they can. Our goal is always to ensure that every kid is doing their best.”